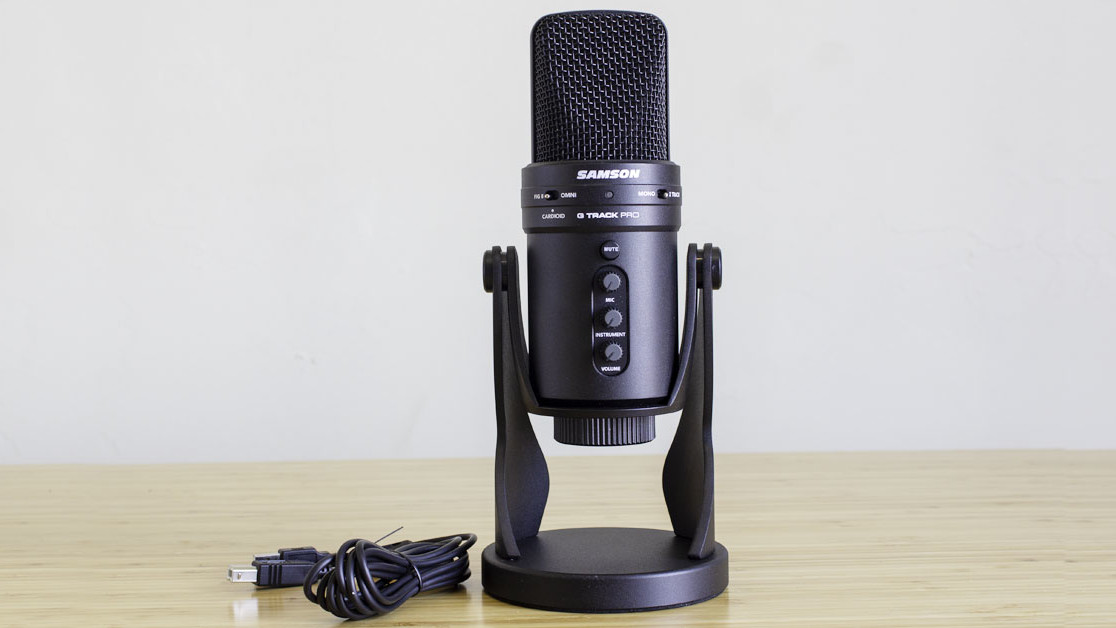 Samson’s G-Track Pro is a gumbo-esque mashup of microphone, audio interface, and onboard mixer. It’s a bit of an oddity, but if you’re looking for a dead-simple hardware solution to take your podcast or gaming stream out of the audio gutter and into the realm of professional broadcasting it just might be the answer to your prayers.

Recording vocals is hard. But it’s a cakewalk compared to streaming them live. You need a microphone capable of reproducing your voice accurately without picking up every noise in the room. Then you have to connect that microphone to the device you’ll be streaming from – usually your computer. You’ll need an audio interface for that, and it’ll have to support headphone monitoring because: good luck trying to monitor live vocals with your computer’s sound card without lag.

Oh and if you’re streaming or recording a podcast, and you intend to use a second microphone for guests or co-hosts, your problems are now doubled. And, unlike recorded vocals where you can fix a lot of quality issues in the mixing phase, when you’re streaming you need to be able to make quick adjustments on the fly without blowing your listener’s eardrums out or forcing them to constantly adjust their volume.

When Samson offered TNW a review unit of its G-Track Pro I leapt at the opportunity. It’s purported to solve all of the above problems with a single device.

The G-Track Pro, first off, is a condenser microphone with three sound modes. It can record in cardioid mode, which only picks up sound directly in front of the “mouth” of the mic. It also records in a bidirectional figure-8 mode that allows it to pick up sound in front of and behind the mic – perfect for recording two voices. And the final mode is omini-directional where it picks up all the ambient noise of an area. Having separate recording modes is a pretty fancy feature for a $109 microphone, but what’s more impressive is that selection is handled with a physical switch on the mic.

In fact, all of the microphone‘s features are handled with onboard controls. It’s fantastic! There’s a dedicated mute button – a must for live streamers – sitting above three separate volume controls and a toggle for mono or two-track recording.

It’s also an audio interface. This means you can plug in a separate audio device like a guitar or DJ turntable and record/stream both at the same time. The aforementioned volume controls work to keep your microphone, instrument, and overall volume levels where you want them and the recording toggle lets you choose between sending the combined audio as a single track or two discrete ones.

But wait there’s more! Seriously, rattling off the G-Track Pros features makes me feel like a late night infomercial pitch man (it slices, it dices, and it makes julienne fries!). Yet there really is more. Beyond being a mic and an interface, it’s also an audio monitor thanks to its single LED light. While recording, if your vocals begin to peak, the light changes from green to red to indicate clipping. It also turns yellow to indicate you’re muted.

Finally, the G-Track Pro comes with a heavy duty podcasting stand and a 6′ cable. It literally has everything you need to record and stream vocals except a computer.

Using the G-Track Pro is a dream. I forewent the included free software DAW that comes with it – Moto’s Audiodesk – in favor of Audacity (because it’s free and open-source). It doesn’t matter what you use though, Windows and Mac should recognize the G-Track Pro because, unlike most professional quality microphones, it’s a plug-and-play USB device. You won’t be needing a pre-amp or USB interface here, so you can spend that money on studio headphones and motivational posters.

I was able to use the G-Track Pro within minutes of connecting it. And, since it has its own headphone monitoring port with an on/off toggle, I was able to monitor my vocals with absolutely no lag. When I plugged my guitar in and strummed a bit, I was able to get the levels perfect in seconds. This thing works exactly as advertised and it sounds better than any other $110-or-less microphone I’ve used for podcasting or recording spoken word.

Here’s the thing: you’re probably not going to use this microphone to record music vocals. It sounds good, it’s clear, and has plenty of range for a podcast or your Fortnite stream. But it’s not the one you put in your home studio recording booth. This is designed to go on your desk. There are better options for singers and rappers to record with, but those options won’t be better for streamers and podcasters – at least not for $100 or less. And if we’re talking about streaming to YouTube, Facebook, Twitter, or other social media platforms, the G-Track Pro is just fine for singer/songwriters – especially those who want to jam live while playing guitar or keyboard.

With the G-Track Pro you’re getting the total package. This thing is a game-changer and a money-saver for just about anyone looking to get into streaming vocals or podcasting. It’s super simple to use and has a high quality build. I just can’t recommend it enough. It may look a tad strange and it’s combined features may sound like a gimmick, but this thing is unequivocally the best all-in-one podcasting solution I’ve ever tried.