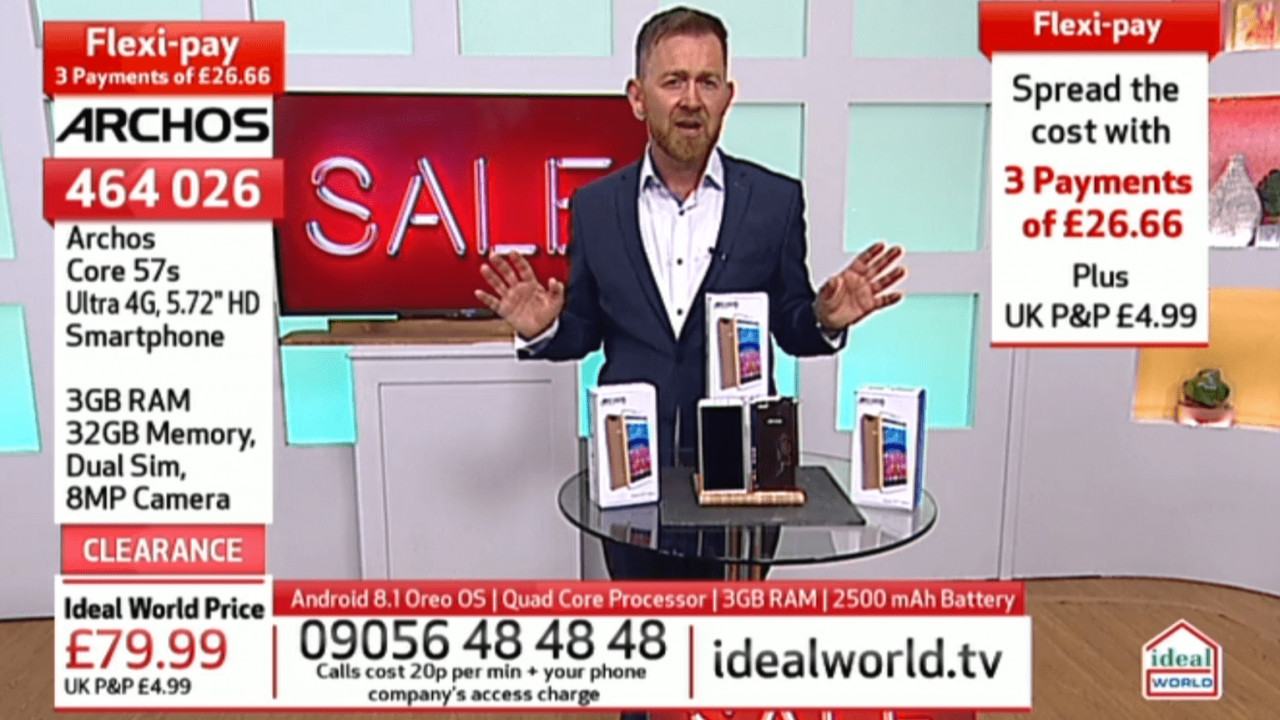 There’s something wrong on Freeview channel 21. That’s the conclusion I landed upon after watching two hours of Ideal World, a free-to-air UK teleshopping station, where they shamelessly pitched an unambiguously low-end smartphone using sales tactics I regard as misleading and high-pressure.

The phone in question was an Archos Core 57s Ultra. Details about this handset are pretty thin on the ground. It doesn’t have a GSMArena profile, which is strange, even for a fairly generic entry-level device. However, according to the manufacturer’s website, it comes with the following specs:

All things considered, it’s a pretty uninspiring, basic phone. I don’t think it’s awful, but that’s besides the point. This isn’t a review of the Archos Core 57s Ultra. It’s a discussion of how it was sold.

I’m deeply concerned with how this device was marketed, especially given the fact that the people who buy from teleshopping channels tend to be older, and inevitably non-technical.

Over just one mind-numbing hour, I observed the two presenters, Shaun Ryan and Peter Vollebregt, say things that were factually untrue.

Furthermore, Android Q is expected to drop in a few week’s time, making this device even more outdated.

At first I thought the hosts had made a mistake, but I heard them repeat themselves multiple times throughout the program.

While it’s entirely possible they were misinformed, it’s not unreasonable to expect better from broadcast television — even if we’re talking about a low-budget teleshopping channel. They’re not journalists, but I’d argue they still have an obligation to represent the truth accurately.

It didn’t stop there. When demonstrating the phone, the hosts presented standard (albeit advanced) features of Android without making it clear that they are available on virtually every contemporary Android phone.

One instance of this was when they showed how to activate Android’s split-screen mode, which Google introduced in 2016 with the release of Android 7.0 Nougat.

Another example came just a few minutes later. “This is a stunning device,” said the host, Peter Vollebregt, when showing off the Google Earth app, which is freely available on the Google Play store.

Most digital natives will just regard this as marketing hype, but remember: they aren’t selling to us.

Teleshopping channels sell predominantly  to non-technical users — older people, in particular, who may feel uncomfortable shopping online. That audience are unlikely to be aware of what’s available in Android and what’s from third-party developers.

Amidst the fudged facts and half-truths was a constant high-pressure sales pitch. The presenters repeatedly told viewers that Ideal World was “losing money” on each phone sold, and that it was an excellent deal. There were regular updates about stock levels, with the presenters periodically saying how many had been sold.

I’m not inherently opposed to teleshopping channels. I think they cater to a particular audience, and they can serve a role, particularly when it comes to isolated, housebound individuals who would otherwise struggle to use online shopping, or a traditional brick-and-mortar high street retailer. That said, what I saw on Ideal World TV left me with a bitter taste in my mouth.

I was concerned by the technical inaccuracies repeated by the hosts, and the arguably misleading way they over-hyped the features of the phone. And the constant drumbeat of “buy now” didn’t help.

Ideal World can do better, but I also passionately believe that all of us have a role when it comes to informing our relatives about what technology products to buy.

And if you don’t mind me blowing my industry’s horn for a second, I think that stems from technology journalists impartially and accurately reviewing products, and readers digesting and sharing what they’ve learned with other people who typically don’t consume tech media.

TNW reached out to Ideal World for comment. In particular, we asked them to address our concerns about the inaccuracies regarding the Android version shipping with the Archos Core 57S Ultra, and how it presented certain features of the underlying operating system. At the time of writing, they’ve yet to reply to us.

Of course, if we hear back from them after publication, we’ll update this piece with their comment.