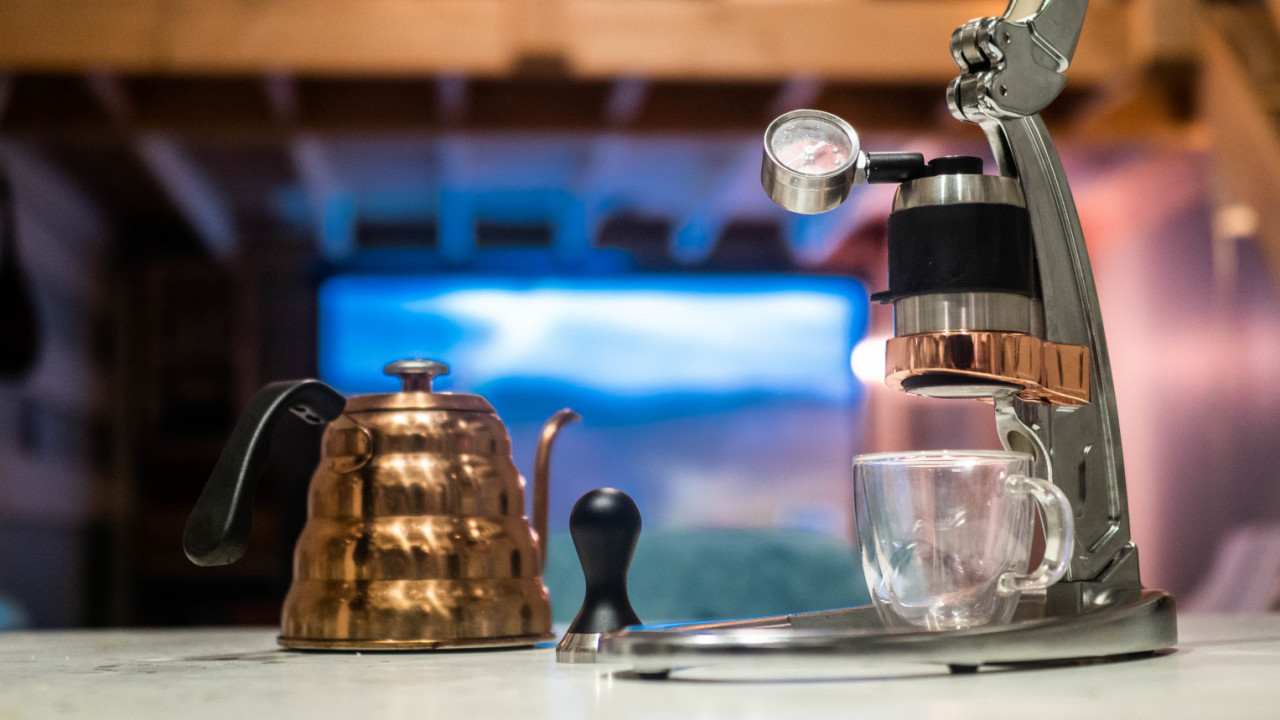 I never expected to become an amateur barista.

A little over a year ago, I decided to stop wasting money buying iced mochas at coffee shops and learn to make my own espresso-based drinks. It was around then that I reviewed Intact Idea’s Flair Espresso Maker, a sleek and portable brewing device that relied on lever mechanics and a bit of arm strength to brew a cafe-quality shot of coffee – no electricity required.

Despite a few caveats, it proved to me that I could pull an espresso at home to rival my favorite Brooklyn coffee spots without spending a fortune. I ended up buying my review unit, and it paid for itself within a few months. The average American spends $1,100 a year on coffee, and us city-dwellers are likely above that median. I’ve probably saved hundreds of dollars in the months since.

The Flair Signature Pro takes everything great about the original model and ups the ante in both the quality and consistency of your espresso shots, while still being portable and easy to use. At $300, it’s a significant premium over the original Flair’s $160 street price, but you’ll likely still be saving over electric machines that can provide similar quality. One of the cheapest electric machines recommended by espresso aficionados is the ~$400 Gaggia Classic, but that doesn’t give you the same level of control the Flair Signature Pro does.

Now would be a good time to read my review of the original Flair if you haven’t already, but here’s the top-level summary of brewing with both Flairs:

–Boil water and pour some into the brewing cylinder for pre-heating.

–While that’s happening, grind your coffee with a good burr grinder, place it in the portafilter (the container where the pressure magic happens), and use the included tamper to compact the grounds.

–Assemble the components, pour water into the brewing cylinder, and push down on the lever.

Flair has a rundown of the process in the video below:

While the Pro has a few more components that make it slightly more complicated in execution, it also introduces a few key improvements — a much larger portafilter and a pressure gauge in particular.

The original Flair’s recommended dosage of 13-18g likely sufficed for many users, but it left me wanting a bit more. Plenty of coffee shops pull shots upward of 20g nowadays, and I often found myself making two shots to get the milk-to-coffee proportions I preferred. The Flair Pro is rated for 14g to 24g, letting you work a wider variety of brew ratios. I typically operate at 21g.

But the biggest problem with the original Flair was not knowing exactly how much pressure you were applying — something that is crucial to getting the flavor right. You could put the entire thing on a scale to get a sense of the circa 30 pounds of force recommended by Intact Idea, but that’s impractical for everyday brewing.

The Flair Signature Pro takes away the guesstimation. In the box comes a pressure gauge with a labeled ‘espresso zone,’ ranging from 6-10 bars of pressure, although you can go lower or higher than that if you’re feeling experimental.

The pressure gauge makes all the difference. Though it still takes some skill and subtlety to get that perfect shot, the visual pressure indicator actually makes it difficult to make a bad shot (assuming you’re using decent coffee roasted within the past few weeks and a good burr grinder).

If you’re using too little pressure, you’ll know to apply more force. If you’re applying too much pressure, the gauge will move into the danger zone. If you can’t sustain high pressures for more than a few seconds, your grind is probably too coarse. If it takes you two minutes to pull a shot, your grind is probably too fine. And if you want to get really fancy, you can purposefully vary your pressure throughout the shot – something usually limited to very high-end espresso machines costing thousands of dollars.

There are other changes too. The portafilter basket is curved to make it easier to see espresso flowing. Aesthetics aside, it helps keep track of the quality of your shot. The brewhead can hold more water for different brew ratios. The included tamper feels better, the drip tray is easier to clean, and the entire unit is both sturdier and better at retaining heat.

All this adds up to remarkably consistent shot quality for a completely manual device. Where with the old Flair it might take a few shots before I was able to ‘dial in’ the coffee – and more with the other models I’ve tried – with the Pro, I almost always get a decent shot with new coffee on the first or second try. Sticking to beans from my favorite local roaster – Brooklyn’s own Kitten Coffee– I’m rewarded with excellent shots almost without fail.

I’d like to acknowledge some of this reviewer’s biases. I liked the original Flair so much, I purchased my review unit. Because I was already able to get better shots than most of my local coffee shops with the original, I’ve barely bothered to try competing products since. And of course, TNW isn’t a coffee blog; these are ultimately the impressions of an amateur who might have an inflated sense of his own skills.

There are also some things I don’t like. The brewhead can get uncomfortably hot during the pre-heating phase, so I wish Flair used a thicker silicone grip. Taking it apart for cleaning after a pulling a shot is similarly uncomfortable, as you don’t have much rubberized surface area to grip the hot brewhead. And unlike automatic or semi-automatic coffee machines that dominate the market, the Flair Pro isn’t a “set-it-and-forget-it” product. Brewing may become second nature after a few tries, but the Flair Pro nonetheless demands some attention throughout the entire process.

(Considering my current caffeine tolerance, I’m pretty sure the coffee-making ritual wakes me up just as much as the caffeine.)

Still, if you’re willing to use a little elbow grease to make better and cheaper coffee every morning, the Flair Signature Pro is a no-brainer. It’s wallet-friendly, can make coffee to compete with the best coffee shops, is portable, and lets you tweak shots to your particular tastes. It’s worth serious consideration from anyone serious about coffee.