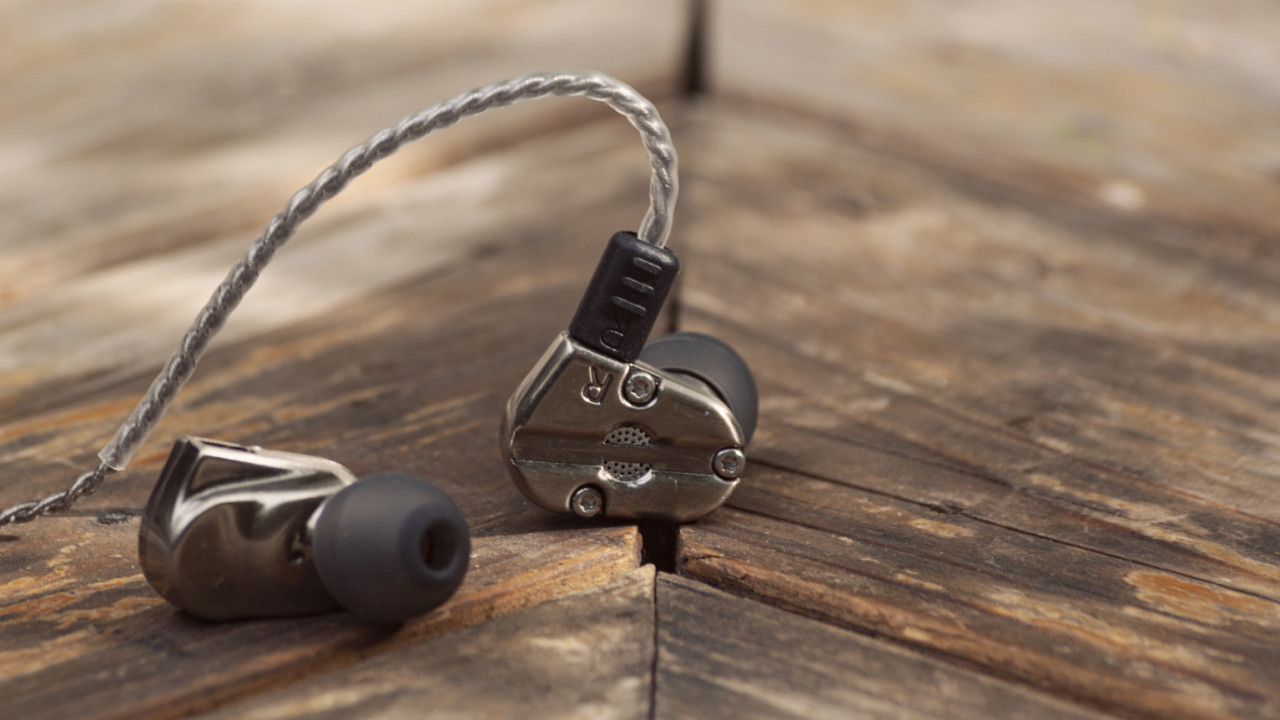 I hadn’t heard of RevoNext until the company got in touch with me, and I imagine I’m not the only one. The Swedish brand has only been around since 2015, and specializes in in-ear monitor-style earphones. Its new QT5 dual-driver earphones look like what you might find in an audiophile’s collection, but they don’t cost the earth – and they sound fantastic.

While these earbuds are designed for people who prioritize sound quality over features, they also pack a cool trick up their sleeve: you can detach the earpieces from the 3.5mm cable, plug them into a shorter one, and ditch the wired connection. That means you get the convenience of wireless audio, without compromising on fidelity.

I tested these over the past couple of months while on the road, and at work. The QT5s sound great, but they’re not for everyone. Let’s take a closer look at what they offer, and whether they’ll put a smile on your face.

The QT5 set feature beautifully finished metal housing for the earpieces, which connect to the main 3.5mm cable with 0.78mm pins. Each earpiece has dual drivers to separately handle bass, and mid and high frequencies. They look great, and you can easily tell the left and right ones apart, thanks to the clear labeling on them.

Now, about that cable. It’s similar to what’s known as a Litz braid cable, which I understand reduces radio frequency interference. Sadly, it tangles just as much as regular cables. What I can tell you for sure is that it looks cool, and you’ll dig it if you’re going for that audiophile vibe.

The cable has plastic sheaths around the last couple of inches of wire near the earpieces, so they hold their hook shape around your ears for a more secure fit. Between the Litz braid and these rigid bits, the cable can feel a bit fiddly at first, but I soon got used to it.

You get three different sizes of silicon ear tips with this set, and once I found the right ones for my ears, they fit comfortably and block out ambient noise much better than other in-ears I’ve used before.

The QT5 sells in two colorways (copper and gun metal, both of which look fantastic), and two variants: one includes a mic and inline remote, and the other doesn’t have those two features (and costs a dollar less) – so be sure to choose the model you prefer when ordering online. My review unit didn’t include the mic, but I still found myself frequently reaching for these over my other feature-rich earphones simply because of how good the QT5 sounded.

The QT5 earpieces can detach from the main cable and connect to RevoNext’s Bluetooth cable, a $37 accessory, for wireless use. Detachable earpieces are rare in this price bracket, so it’s nice to see the company offering this feature to folks who aren’t looking to empty their wallets entirely.

The Bluetooth cable is sold separately and works as advertised: you’ll get about six hours of use on a single charge (which takes close to two hours). This includes a mic and remote with three buttons, and voice audio quality on calls is pretty solid. There are also two silicon wraps for the ends of the cable that connect to the earpieces, for hooking on to your ears more securely.

The bummer is that the remote and battery are housed in two separate plastic blocks on this thin cable – and all these components have pretty basic industrial design and construction. The cable works fine, but it hardly looks like it’s meant to deliver high-fidelity audio, and I worry about how it’ll hold up over time.

Now for the good stuff: the QT 5 earphones sound stellar. Their dual drivers deliver crisp highs and mids, and tight, punchy bass. The soundstage is wide enough to allow for good separation between instruments, so you can easily pick out melody and bass lines, and follow them through songs.

It’s hard to trip these up, no matter what genre of music you’re into. From dynamic modern jazz like Aaron Parks’ Little Big, to epic progressive metal like Evergrey’s new album, The Atlantic, and pop genius Jordan Rakei’s latest record, Origin, the QT5s handle them all with aplomb.

They contend pretty well with crowded treble sections, but I did come across the odd track that distorted a wee bit when rhythm guitars and cymbals clashed together in raucous rock choruses. That said, these are still high up on my list of excellent sounding audio gear.

I was impressed not only by how well the QT5s reproduced the sounds of my favorite records, but also by how they allowed for enough dynamics, and room to breathe in ambient sections in a variety of tracks. You’ll be hard-pressed to find earphones that can handle such a wide range of sounds as gracefully as these do, at this price point.

There’s no shortage of earphones to choose from these days, no matter how much or how little you care to spend on them. But if you care more about sound quality than features, I’d recommend considering RevoNext’s QT5 set, even if they’re at the top end of your budget at nearly $30 – or even if you plan to spend up to $100.

The company’s Bluetooth cable, which costs an extra $37 (and is also available on Amazon UK at £19.98) is nice to have if you can afford it. But for that extra coin, you could also get a whole separate set of truly wireless buds, like these well reviewed ones from Soundpeats that support Bluetooth 5.0.

Oh, and you should know that these don’t come with a case – there’s just a small velcro cable tie to keep things in order, and I didn’t care for it at all. You’re better off picking up an inexpensive earphone case separately; RevoNext sells a smart silicon one for $9, and I also found this neat looking two-pack that goes for just $6 on Amazon US.

H/T Atul Pinheiro for assisting with photography for this review.