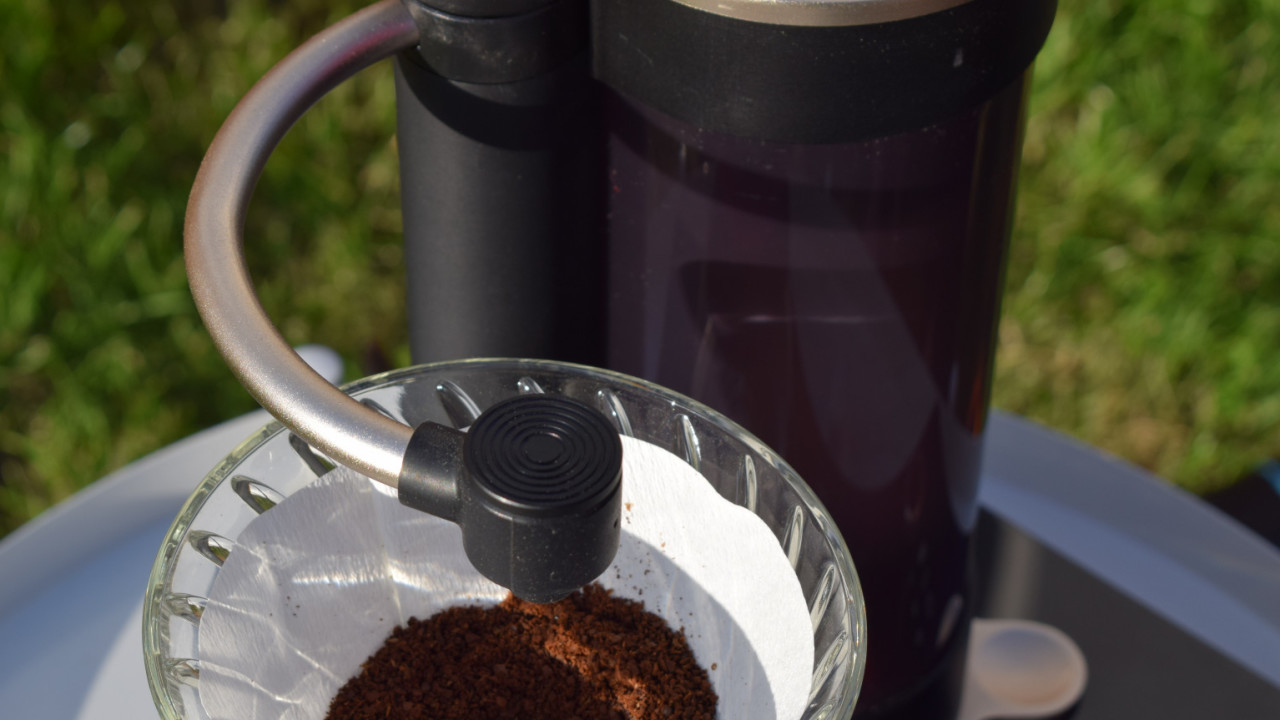 Essentially, it wants to do for trendy pour-over coffee what the Mr Coffee machine did for bog-standard drip coffee. The machine comes with a robotic arm that purportedly can mimic the movements of a human barista.

The GEESAA robot barista is currently crowdfunding on Kickstarter, where it’s raised nearly $40,000 out of a modest goal of $25,000. The makers behind the device sent TNW a pre-release model to play with before devices make their way to backers. So, what’s the deal?

Hands on with the GEESAA robot barista

The GEESAA isn’t a small piece of kit. It is almost double the width of my day-to-day coffee maker – which is some generic DeLonghi drip machine. When placed on my kitchen counter, it occupies a significant amount of space.

The device itself is extremely attractive. On the top of the device is a set of knobs, which allow the user to control the device, activating coffee recipes. There’s also an LCD display, which shows the temperature of the water, as well as what recipe has been activated.

The water is stored in a sleek cylinder and is transferred to the pour-over receptacle via a robotic arm. This moves in the method that you choose. The brewed coffee then accumulates into a carafe, which is included in the package.

As you’d expect from any bit of smart home gear, the GEESAA robot barista connects over Wi-Fi to an included companion app. This is available on both iOS and Android.

I tested the Android version, which at the time of writing, isn’t available through the Google Play app store. A GEESAA representative sent it to me separately, and I side-loaded it onto my own personal phone.

As you’d expect from any kind of pre-release tech, it wasn’t exactly a smooth experience, and I tended to find myself using the device’s manual controls. One surprise was that it requires you to register with the manufacturer, either manually, or through your Facebook account. It also requires you to provide your mobile number – although for some reason, it didn’t work with my UK mobile number. Fortunately, thanks to a quirk of the app, I was able to avoid this step.

Who is the GEESAA robot barista for?

That’s the question, isn’t it? It’s obviously a niche bit of kit, aimed at a niche demographic of die-hard caffeine addicts. GEESAA is touting the device on Kickstarter for $699 (that’s the non-early bird pricing). When it eventually goes on sale through ordinary retail channels, it’ll cost $1,000.

That’s damn expensive, although, perhaps a little perversely, not the most expensive home coffee maker on the market. There are others that retail for several factors more, like the Jura GIGA 5 Chrome, which costs £3,595.00 (over $4,500) at Harrods.

The thing is, I can imagine someone buying it – if not for the fact that it’s fairly stylish, but also for the fact that pour-over coffee is in vogue right now. Fans of the method say that it affords them more control than they otherwise would get with a standard percolator.

I like coffee. Hell, I depend on it. But I’m not sure I have the level of enthusiasm that would compel me to spend over a grand on a coffee maker.

I’m not a snob. Just ask my colleague Bryan Clark, who was aghast when I asked him to bring me a tub of Folgers coffee when we last met up in Amsterdam. (It’s the best part of waking up, don’t you know?)

Still, if you’ve got deep pockets, it’s perhaps worth checking out. At the time of writing, there’s a few hours left in the crowdfunding campaign. After that, keep an eye on GEESAA’s site for standard retail availability.