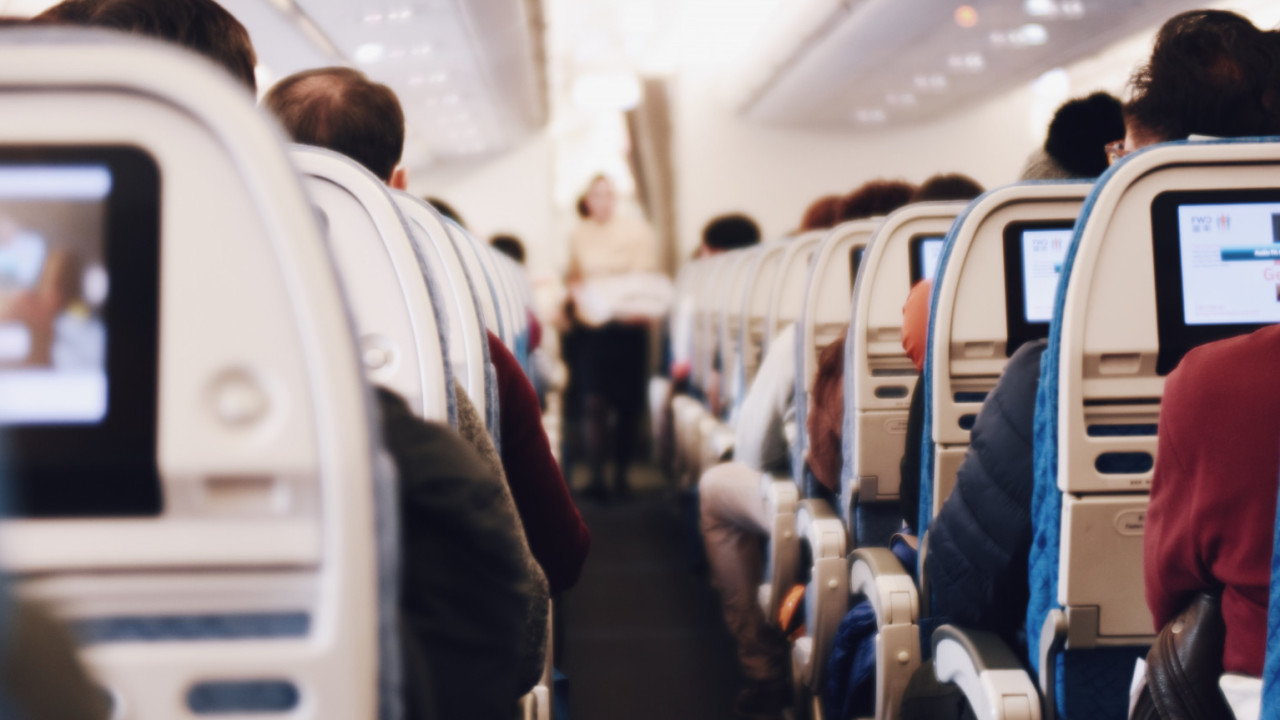 It’s not just you. For the past forty years, airline seats have shrunk to the point where some carriers offer just 28 inches of pitch – defined as the distance from the back of your seat to the seat in front of you – to economy passengers. If you’re going on holiday, that’s probably not that much of a problem, but what if you’re traveling for work?

This is a problem I run into regularly. Last year, I flew about 75 segments, almost all seated in economy. Trying to get things done with a regular laptop is almost impossible. Firstly, when your neighbor in front reclines their seat, it pushes your laptop display downwards, so it’s almost impossible to see the screen.

Secondly, the lack of seat width means that if you want to type, your elbows will almost definitely spill over into the seat of the person sat next to you. Not only is that manifestly unfair, but it’s also uncomfortable for both parties involved.

In the past, I’ve considered flying time as “dead time.” But it doesn’t have to be that way – all you need is a decent tablet computer and a keyboard.

I recently invested in a 6th generation iPad, partly so I could play with iPad OS when it comes out, but also so I can find new ways to be productive while airborne.

I’m crap at typing on a virtual keyboard with any sense of speed, so I also bought a decent keyboard case. Accompanying my new iPad was the Logitech Slim Combo keyboard case. I paid £85 for this (about $110), which was a discount on the usual MSRP of £100 (circa $130).

There are a lot of iPad keyboard cases on the market, most of which are cheaper than the Logitech Slim Combo. Why did I pick this one?
For a few reasons. Firstly, I trust Logitech. In my experience, their stuff is almost always well-built. If I’m going to be using this as my travel workhorse, I need to know it’ll withstand the indignities of daily use without failing.

Secondly, I can physically disconnect it from my iPad and it’ll continue to work. The Logitech Slim Combo case consists of two parts: a protective case that includes a kickstand, as well as a removable keyboard which also serves as a screen protector when not in use.

I tested my new setup on a flight from Manchester to Toronto on Air Transat. This was a pretty grueling flight, even by the miserable standards of most economy cabins.

I flew on an Airbus A330-300, which is typically configured in an eight-abreast layout. By some miracle of aviation fengshui, Air Transat has managed to squeeze an extra seat in, in order to create an unbelievably tight nine-abreast layout. The odds of me getting some work done on the eight-hour transatlantic puddle hop were incredibly slim.

And yet, I did. I was able to transcribe the lion’s share of an hour-long interview relatively easily. And crucially, I managed to do it without annoying the person sat next to me – which is important, given we’d be cheek-to-jowl for a relatively long time.

Of course, I had to adjust how I worked somewhat. Using the back-half of the Logitech Slim Combo case, I propped my iPad up and placed it in the middle of my seatback tray. This ensured that no matter how much the person in-front of me reclined, I’d still be able to see the display.

Then, I detached the keyboard portion of the case and placed it on my lap, underneath the tray. This wasn’t an issue for me, given that I can touch-type.

Unlike some cheaper tablet keyboards I’ve used in the past, the Logitech Slim Combo’s really good at mimicking the experience you’d get on a normal laptop. Keys come with a decent amount of travel, allowing you to feel every keypress.

Furthermore, the case’s keys are delightfully well-spaced. In my experience, I was extremely accurate when touch-typing, recording very few accidental presses.

Logitech says the Slim Combo’s keyboard, which connects over Bluetooth LE, can theoretically last for 40 hours between charges. Although I didn’t need to test the limits of the case, I can’t argue with that. The battery lasted well beyond the duration of my flight, and crucially, the wireless connection was consistently stable.

Why didn’t I do this earlier?

That’s the question I asked myself when I landed at Toronto Pearson Airport. I was able to actually get some work done while airborne, allowing me to watch a movie relatively guilt-free.

While you could easily replicate this setup on an Android tablet, I’d strongly encourage you to stick with the iOS ecosystem, just because iOS feels better suited to being used with a keyboard.

As an added bonus, iOS comes pre-installed with some solid productivity tools, too. The iPad versions of Word and Pages are excellent, so too is Keynote and Numbers. There’s also a diverse array of text and markdown editors, for those looking for a simplified, distraction-free experience.

Personally, I’m a big fan of iA Writer, which costs £8.99/$8.99 from the App Store, has an exquisite dark mode, and natively supports iCloud. A free version of iA Writer is also available for Android, although some features require an in-app purchase to unlock.

The tools of the trade

If you want to replicate my setup, you’ll first need an iPad. I got the 2018 version with a base 32GB of storage, despite knowing an upgrade is due later this year. Given I was planning on merely using it as a tool for productivity, I don’t feel too bad about being behind the curve. Here’s how much it’ll cost per your local Amazon store.

Then, I grabbed the Logitech Slim Combo. Like I said, this is more expensive than your average iPad keyboard, but it’s worth it. It’s solidly built, works well, and is comfortable to type on for extended periods of time.

Then it’s up to you! If you’re taking an ultra-long haul flight, like Qantas’ 17-hour route from London to Australia, you’ll probably want to invest in a decent battery backup. Personally, I’m a big fan of the Anker PowerCore series, which are lightweight but pack a decent charge. The Anker PowerCore 20100 comes with more than enough juice for even the most demanding of trips:

And if you find yourself running out of space, or merely need a backup, you ought to check out the SanDisk iXpand. These USB drives allow you to copy files from your iPad, which can later be transferred to an ordinary computer. Here’s how much the 32GB version will set you back:

Airplanes can be noisy. If you’re transcribing an interview, or listening back to a meeting, you’ll want a decent pair of noise-cancelling cans. I’m a big fan of Anker’s Soundcore Life 2 over-ear headphones, which are comfortable, sound great, and come with ANC built-in.

And finally, if you’re hoping to get some sleep, you’ll want to invest in a comfortable neck pillow. For me, the Ostrich Pillow Go has been nothing short of game-changing. Sure, it’s expensive, but it’s so worth it.

Do you have your own travel productivity setup? I want to hear about it. Drop me a line via Twitter or email.