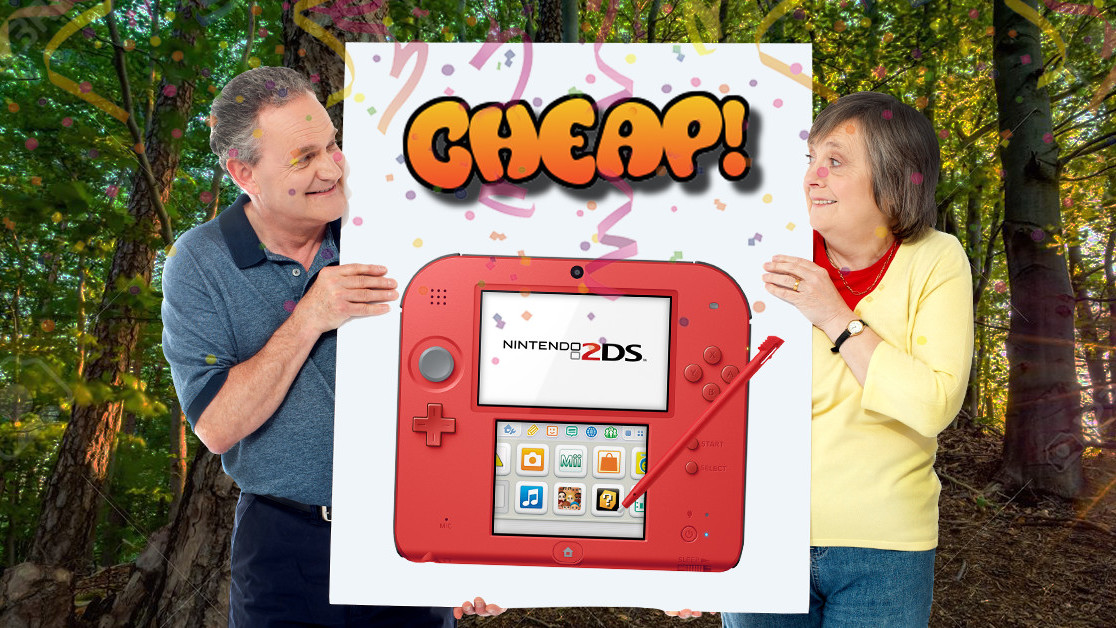 Everyone loves a little bit of on-the-go gaming. There’s little better than kicking back on a plane, train, or any other sort of transport, and losing yourself in a title. And you know the best way to play games when you’re out and about? Nah, not on your phone – on one of Nintendo‘s fantastic portable consoles. You know, like the 2DS?

Oh – and you’ll never believe this – there’s a great deal on the Nintendo 2DS! You can get the console for $49.99. Yes, for literally under 50 bucks, an entire games console with an unbelievable library of brilliant titles can be yours.

Some of those games include Mario Kart 7, The Legend Of Zelda: Majora’s Mask, and Pokemon Ultra Sun & Moon – plus way too many more to list here.

The Nintendo 2DS is part of the company’s long time focus on portable gaming. Released after the 3DS (which, as the name suggests, is a console that lets you play games in 3D), the Nintendo 2DS can run all the same games as its predecessor, just not in, well, 3D.

The design is also a little different. The 3DS has a folding, clamshell layout, but the Nintendo 2DS is more like a tablet. This, in my mind, is a good thing. The hinge broke on my 3DS and it was an incredibly frustrating experience. You won’t have to worry about that with the Nintendo 2DS.

One note before we go, this offer is on a refurbished console. But, don’t click away just yet – it’s refurbished directly by Nintendo and comes with a year warranty. You can find more details about that here.

Basically, this Nintendo DS is an ideal purchase if you’re looking for a portable games console to throw in your bag without much worry, or maybe as a gift for someone wanting their first on-the-go gaming machine. Hell, you can’t really go wrong for a great bit of tech like this for under $50.

So, head over here and pick yourself up a Nintendo 2DS for only $49.99. It’s phenomenal deal on a wonderful console with an unparalleled game library. You’ll never be bored waiting for the bus again.