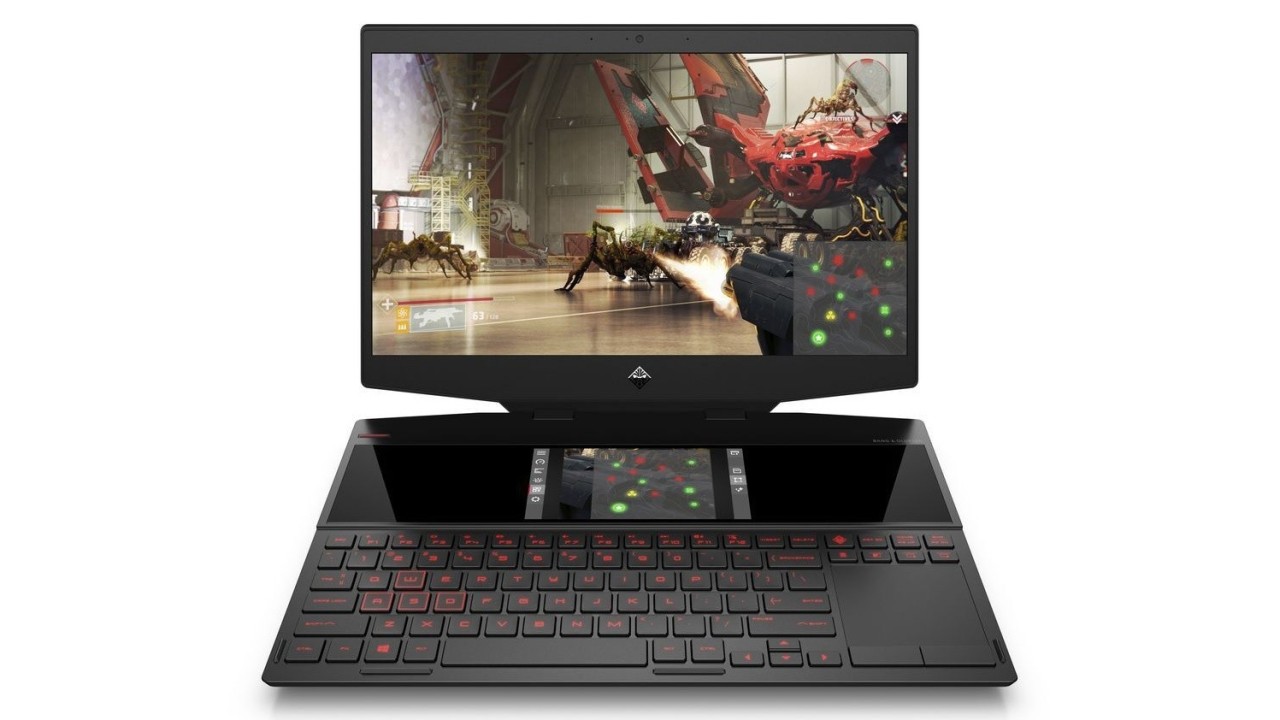 In addition to a 15-inch primary display, the machine comes with a petite 6-inch 1080p touchscreen panel located just slightly above the keyboard. While you can’t use this to extend the gaming experience, as you perhaps would with a normal external monitor, you could use it to watch Twitch streams while you play, or chat with friends on Discord.

I’m not much of a PC gamer (although I am partial to the occasional bit of Civilization), but I am a software developer by training, and something like the HP Omen X 2S is extremely attractive to me. And I bet I’m not alone in feeling this way.

For starters, I love the idea of being able to have documentation stashed in a window below my text editor. This would allow me to quickly glance at code samples and method explanations, all without having to break my concentration by switching tabs. It would also permit me to discuss a problem with a colleague on Slack, while simultaneously making edits to the codebase, or even have a terminal window always in view.

Of course, programmers working from an office tend to work from elaborate, multi-display setups. This machine wouldn’t really do much for them.

That said, developers who hot-desk (i.e. work from co-working spaces and offices where they don’t have a guaranteed, permanent desk) or work from coffee shops might find the Omen X 2S useful. Similarly, tech workers with grueling travel schedules could find it helps them be productive, as they churn out lines of code from the desk of a dismal airport hotel.

Another thing that makes the HP Omen X 2S attractive to code-monkeys is the fact that it’s undeniably powerful. You’d expect that from any gaming machine worth its salt. It comes with an 9th generation octa-core Intel Core i9 CPU, paired with up to 32GB of RAM, and Nvidia’s GeForce RTX 2080 Max-Q GPU.

The presence of a proper, dedicated GPU is fantastic news for those who want to do any kind of games or virtual-reality programming. It should also lend itself to computationally intensive tasks that use the GPU to speed things up, like training neural networks with TensorFlow.

HP hasn’t released details about the machine’s battery life yet, but I’d be astonished if it offers more than a few hours of juice when removed from the mains. That’s not necessarily a criticism of this particular machine. It’s just that gaming laptops almost always prioritize sheer brutal power over endurance.

The company also hasn’t disclosed how much the device weighs. We do know, however, that it’s fairly thick by the standards of modern laptops, measuring 2.2cm in height. While that’s a bit bigger than the current generation MacBook Pro, which is 1.49cm in height, the HP Omen X 2S doesn’t seem oppressively girthy. The iconic 2012 pre-Retina MacBook Pro, for example, was just 2.41 cm tall, and I carried that around with me every day during my university days without much fuss.

So, what would a developer edition HP Omen X 2S look like? Well, for starters, the option of Windows 10 and Linux is a must. Although Redmond is putting huge emphasis on making Windows 10 work with modern UNIX tools and workflows, many software engineers prefer a native Linux experience, as demonstrated by the enduring success of Dell’s Ubuntu-powered XPS and Precision lines, as well as boutique hardware vendors like System76.

Those developers who opt for a Windows machine should have a clean experience, with the least possible amount of bloatware. When you get a new computer, you want to install the tools you’ll use, and not spend hours removing bloody McAfee.

Dell’s developer laptops are essentially Linux-enabled versions of their mainstream Windows fare. There’s no hardware re-engineering required. That said, I strongly feel that in order to address the burgeoning developer market, a hypothetical coder-friendly HP Omen X 2S should come with an option that ditches the discrete GPU and cooling system. This would shave a few ounces off the system’s weight, and potentially offer a tangible battery life boost.

Honestly, I’m really excited about the HP Omen X 2S. When it comes out in June, it’ll retail starting at $2,099.99. And honestly? That’s not bad. The entry-level 15-inch MacBook Pro retails for $2,399, and in many key areas, like the CPU, is surpassed by HP’s newest effort.

Primarily though, the thing that makes the Omen X 2S truly worth its cost it is the 6-inch FHD display. It’s just such a clever idea, and I have no idea why it isn’t a mainstream design concept, especially when the productivity advantages of a second display are widely known.

Obviously, TNW got in touch with HP to ask about their developer ambitions for this machine, and if they have any plans to introduce the secondary display to other laptops in its lineup, specifically the more business-oriented EliteBook lineup. If we hear back from them, we’ll update this post.