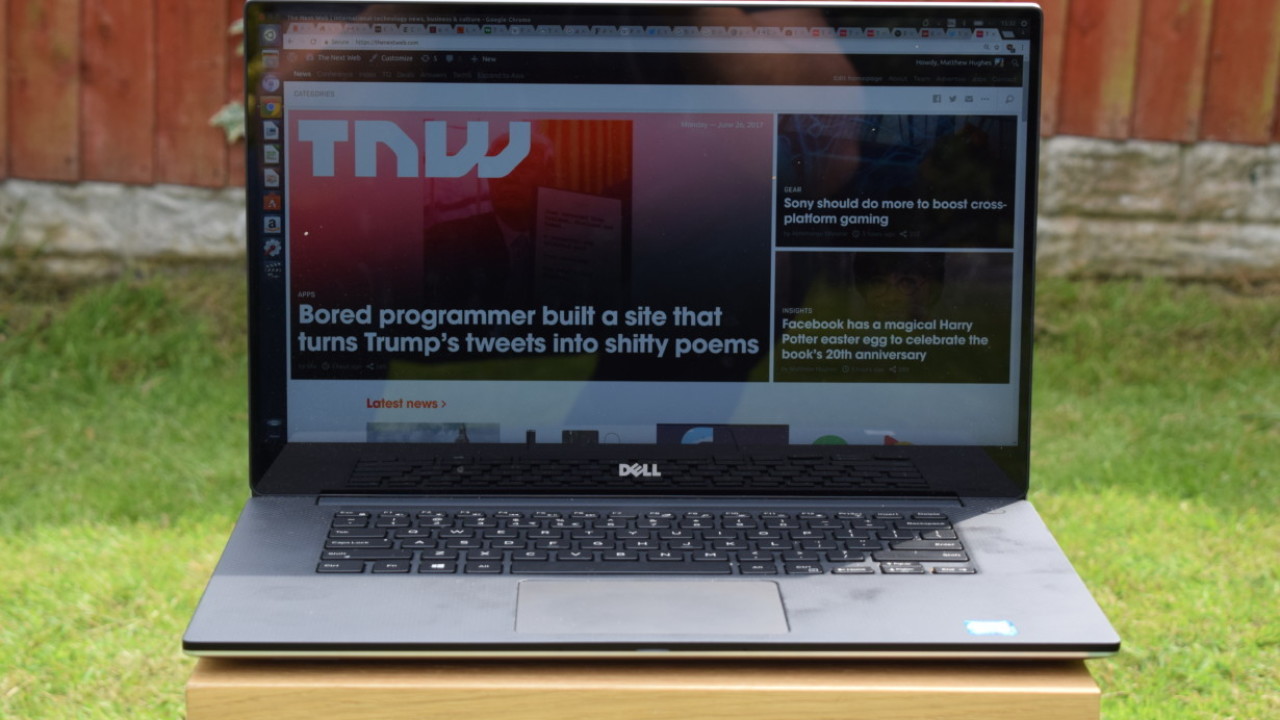 The transformation of Dell into Linux hardware maker is nothing short of extraordinary. It started in 2012, when Dell’s Project Sputnik started to offer Ubuntu pre-installed on specific developer-class laptops, like the Dell XPS series. Five years later, Dell is offering Ubuntu on an even broader array of PCs, including the gorgeous Precision series.

Dell’s Precision 5520 Ubuntu is a capable machine, with looks to match. But does this justify its astonishing pricetag, which depending on configuration, can soar past the $3,000 mark?

As is the case with most Dell laptops, the Precision 5520 is eminently customizable. During the order process, you’re given the chance to decide its CPU, GPU, RAM, storage, and display.

The review loaner sent to me by Dell essentially maxes these out. When I priced it out on the Dell website, it quoted me over $3,000.

This is a beast. But if you cheap out (if you call spending nearly $1,400 ‘cheaping out’), you can get the same machine, but with a lower grade of screen and battery, a mechanical hard drive, a lesser i5 GPU, and only 8GB of RAM.

The professional desktop replacement market is a niche within a niche. It broadly sits shoulder-to-shoulder in the same category as gaming machines, like those offered by Razer, as well as Dell’s own Alienware. These are computers designed for performance above everything else.

But there are several points of contrast between professional powerhouses and gaming machines. The most immediately obvious is looks. While gaming laptops can be drop-dead gorgeous (the svelte Razer Blade comes to mind, as to does the muscular Alienware 15), nobody has ever looked at a Thinkpad and thought phwoar.

The Dell Precision 5520 is an outlier in that respect. It’s drop-dead gorgeous. This is a laptop you won’t be ashamed to be seen using at the local hackerspace or Starbucks.

It looks almost identical to the (also stunning) XPS series of laptops, which are some of the nicest looking PCs on the market right now. The biggest difference is in weight and girth. This is inevitable, when you consider it packs a discrete GPU, a larger battery, and a fan powerful enough to cool down its power-thirsty innards.

This doesn’t make it feel any less portable though. I was able to throw the Precision (and its accompanying power brick, which is roughly the size of a BlackBerry circa 2007) in a rucksack without feeling encumbered.

You can comfortably use it from your lap, although this depends on what you’re doing. When taxed, the Precision 5520 gets extremely hot.

This laptop is a bit of a chunky monkey, and comes with an array of ports: two USB-3.0 ports, one USB-C, an all-important SD slot, a 3.5mm jack, and a full-sized HDMI port.

That said, for the money, I would have appreciated a couple more US-3.0 ports, and perhaps an ethernet port. It felt like a strange exclusion for a device aimed at developers and professionals.

Perhaps the best part of the Precision 5520 is its gorgeous InfinityEdge display, which has quickly become the standard across the highest echelons of Dell’s lineup. InfinityEdge is as close to a bezel-less design as you can possibly get at this point, and the end result is a machine that looks svelte and ridiculously streamlined.

Speaking of the display, I can’t stress how good this is. Colors are accurate; whites are white, and blacks are black. It’s bright, and is easily visible in sunlight. I can’t say enough good things about it.

I’m going to resist gushing about the keyboard too heavily; there’s a lot of personal taste to factor into here. However, I found it to be precise (no pun intended), and extremely comfortable to type on. I find it a lot more pleasant than the Butterfly-style keys found on Apple’s latest laptops. Given that the average person who stumps up for this laptop will likely be writing a lot of code, this is essential.

The Intel Xeon E3-1505M is the second-fastest mobile Xeon silicon around at the moment, and it uses a 14nm process. Despite that, it’s still extremely power-thirsty. Then there’s the small matter of the 4K display, and the discrete graphics card. This means that, even with the larger 6-cell battery, you won’t last long when away from the mains.

In terms of getting shit done, the Precision doesn’t disappoint — at least, this particularly beefed-up version of the Precision. I could watch four separate 4K videos on YouTube, while using the device’s GPU to train a neural network, and it heroically remained standing under the pressure.

As a workstation GPU, the Quadro isn’t really intended for gaming — it’s mostly for using its CUDA features for serious number crunching, or for CAD/CAM applications. But that’s not to say it isn’t possible, and the machine indulged me in several rounds of BioShock Infinite and Tomb Raider on reasonably high specifications.

Many developers find they’re more productive in a Unix-like environment. Some prefer to use MacOS, while others use Linux on PC hardware. Either approach is valid, and Dell has long excelled at catering to the latter demographic.

The two biggest reasons someone would buy a PC with Linux pre-installed (rather than buying a PC and then installing Linux) is that it works perfectly out-of-the-box, and that you’re spared paying the ‘Windows tax.’

On both accounts, Dell’s Linux efforts satisfy this criteria. Buying the Dell Precision 5520 with Windows 10 will set you back an extra $101.39 (or £82.60 in the UK). Moreover, it comes with all drivers installed and configured. It’s ready to rock straight out of the box.

Unlike its Windows efforts, Dell has taken a light touch with how it customizes its Linux offering. It comes pre-installed with all drivers, and a few other basic utilities (mostly relating to recovering the system and configuring the built-in GPU). You won’t see the type of irritating shovelware found on its consumer offerings. It’s a blissful, McAfee-free zone.

That said, there are a few places where I wish Dell took the initiative.

Here’s an example. When you boot into the machine, you’ll notice that icons and menus are infinitesimally small. You have to squint hard to make out what’s happening on the screen. That’s thanks to the Dell’s outstanding, ultra-high definition display.

There’s a quick fix for this. In the settings, you can change the scale of icons by changing a multiplier. Adjusting “Scale for menu and title bars” from one to two seems to do the trick.

It’s worth mentioning that this doesn’t work for every application, although that’s hardly Dell’s fault. Popular apps like GIMP and Steam come with lackluster support for ultra-high resolution displays, but Google hard enough and you’ll find a decent third-party HiDPI patch.

I was also underwhelmed by the trackpad drivers on the machine. The Precision’s trackpad is delightfully large — similar to the one on the latest-and-greatest MacBook Pro laptops. Unfortunately, the larger surface area means it’s much easier to accidentally graze it with your palm.

It’d be nice if this came configured to ignore these accidental presses, as is the case with Dell’s premium Windows offerings. Similarly, I wish it came configured with some touchpad gestures. It’d be nice to be able to swipe up and see all open applications, for example.

The Dell Precision 5520 is a gorgeous piece of hardware, matched harmoniously with Ubuntu. For those looking to use it in industrial contexts, or as a ridiculously souped-up development machine, it’s ideal.

The Precision occupies a small niche of the computer market. When you narrow this down to those running Linux, it gets even smaller. Its closest direct rivals would be System76’s Bonobo WS and Serval WS machines, and Entroware’s Athena laptop. Perhaps, when looking at the lower-specced out Precision 5520’s, you could also consider the aforementioned System76 Oryx Pro.

But you want a tough, number-crunching machine that looks stylish, I can’t recommend the Precision 5520 enough.