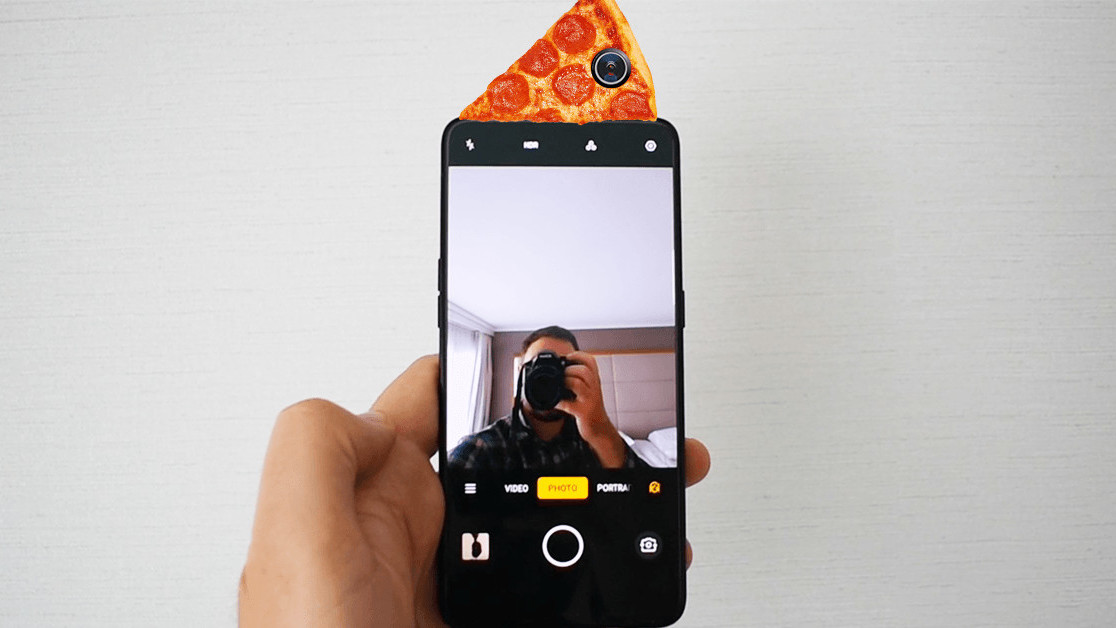 OPPO – the Chinese smartphone manufacturer – has a history of trying to straight-up murder the notch. Its Find X device introduced a slide system, but, with the brand new Reno, it has something different in mind: the pizza-slice selfie camera.

We attended the phone’s launch in Zurich and were able to get our hands on the Reno for a day or so. Before we dive in though, it’s important to note this is an engineering version, not the final bit of hardware. So, this piece is more of an overview of the Reno, not an in-depth review.

That, friends, will come later. So, let’s get the basics down.

Cool – are there multiple versions of the Reno?

For sure. There are three types, the standard Reno, the Reno 5G (which we won’t really talk about), and the Reno 10x Zoom (which we definitely will). The latter phone is the one we got our hands on, so it’s going to be our focus.

First things first, the cameras. It has three of the badboys on the rear. These are:

As the name suggests, the Reno 10x Zoom also includes a… 10x hybrid zoom. If you crank it up to the very top (it goes up to 20x), it’s pretty impressive. Here’s one photo:

And another from the same location zoomed into the max:

For completeness, the standard Reno has dual rear cameras (48MP and 5MP), instead of the triple threat set-up. Happy now?

Yeah, pretty much. Does the phone actually take nice photos though?

No matter how decent they are, the shots didn’t blow me away. Still, speaking to OPPO, there’s going to be a raft of software updates before the Reno goes live. We’ll withhold proper judgement until then.

Fair. So… what about the pizza-slice selfie camera?

Well, OPPO refers to it as the “Pivot Rising Structure,” but I think our terminology is better. This includes the front camera, flashlight, and earpiece – but I never tried out the last feature.

I’ve gotta say, it’s pretty cool. Here’s a GIF of it in action:

It takes around 0.8 seconds to, uh, appear? When I shared this in TNW’s newsroom, some people were aghast at the speed. Personally? I don’t really mind it. The extra screen space in everyday use is worth the bit of time spent watching the pizza-slice slide out. But, at the end of the day, your thoughts on this are your own.

Despite this, I definitely prefer the Reno’s pizza-slice design to the Find X’s slider. The fact it goes directly into the phone – rather than sitting on its back and moving up like the Find X – makes it feel more resilient.

OPPO says the pizza-slice will last for 200,000, uh, appearances? If you’re worried about it snapping into cheesy shards when dropped, OPPO has installed a mechanism that’ll automatically, uh, disappear (?) the wedge when it detects a fall.

Of course, we’ll only know how well it’ll function after some solid use, but, at the very least, OPPO‘s anti-notch hardware is definitely evolving.

What benefits does the Reno’s pizza-slice bring then?

It’s all about the screen. The Reno 10x Zoom has a continuous 6.6-inch OLED display (the other Reno has a 6.4-inch screen) – and it really is lovely. The colors are vibrant, it has a resolution of 2340×1080 pixels, and a 93.1 percent screen-to-body ratio. Basically, it’s mouth-watering

You’re not going to get something as immersive as this with a notch.

The pizza-slice design also means the Reno has a very smooth feel, with the rear cameras hidden under the back cover. I found it smudged quite easily, but it also wiped off quickly.

Sounds lovely – anything else I need to know?

There are a few other nice features, such as VOOC 3.0 fast charging tech, which – according to OPPO – will give you two hours of talk time for five minutes of charging. Breathtaking if true. The screen is also covered in Gorilla Glass 6, which should make it tricky to smash into a thousand pieces.

Overall, the Reno is an impressive phone that has a creative way of slaughtering the notch. The huge screen space is pretty captivating, but the big issue is how well the pizza-slice selfie camera holds up. Still, I’m excited for the notchless future.

The normal Reno will be released on May 10, the 5G at some point in the same month, the the 10x Zoom is being released in June. Stay tuned to Plugged for the full review.