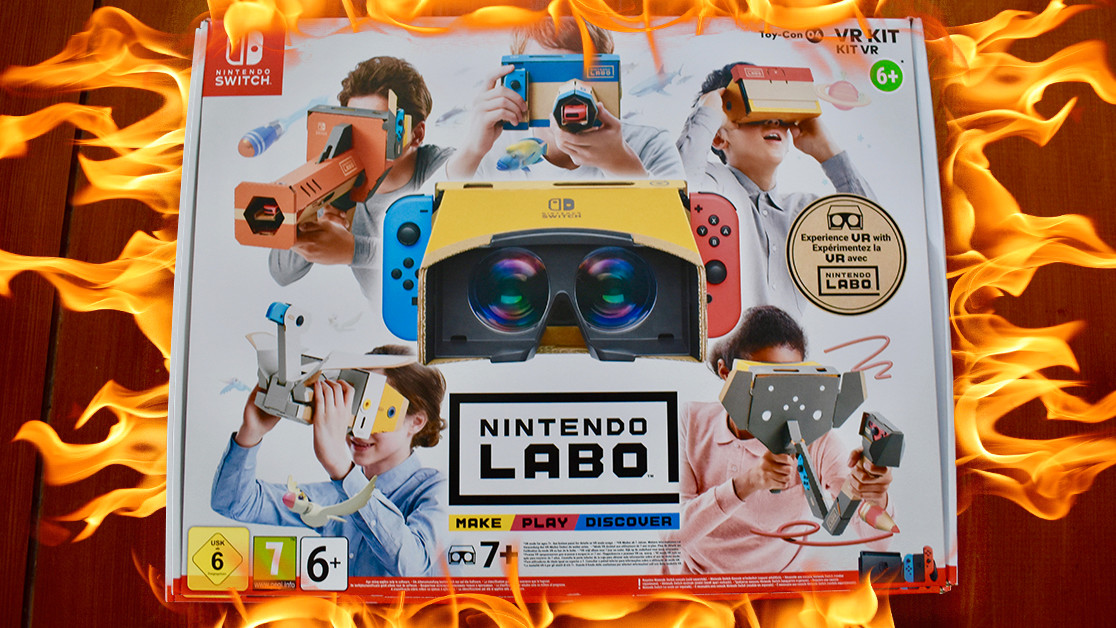 No one expected the Labo.

Nintendo’s cardboard-based contraptions for its Switch are the sort of thing only the Japanese game giant could do. I mean, could you imagine Microsoft coming out with an arts-and-craft set that lets you turn the Xbox into a piano? Nah, me neither.

I never played with the original Labo. Nintendo refused to send me one, which led to the creation of the Labooth, something you can read about here and here. Thankfully, things have changed. Yes, Nintendo finally saw the light and sent me an advance copy of its new product: the Labo VR.

A quick note before we begin: this isn’t a review – at least, not a full one. Instead, this piece is some initial thoughts from my short time with the Labo VR kit.

Let’s get into it!

The designs are ingenious…

The Labo VR kit includes a variety of items called Toy-Cons, which are things like a set of goggles, a blaster, an elephant mash, a camera, and a bird. These come as flat bits of cardboard, and then fold and slot together to create.

I’ll be honest, I didn’t build them all – I just didn’t have the time. But, the objects I did put together were great.

The instructions were clear and finely animated on the Switch, and the whole thing felt very origami-ish. Construction was both intuitive and magical.

…but building them takes a while

Putting together the VR goggles took me just under an hour, with the camera taking a similar amount of time.

According to the estimate on the Switch, the more complex Toy-Cons (for example, the elephant mask) could take up to two hours to complete. Whether you see this as a positive or negative is down to, uh, you.

On one hand, you’re getting a lot of hours out of your investment. On the other, you need to sink a lot of time into it to get playing.

The games are fun, but short-lived

The titles I played involved things like taking photos in the ocean, throwing a ball through a hoop, and wandering around a virtual world. All are entertaining, but have short shelf-lives.

One element that could combat this though is the Labo Garage feature. Available both in normal and VR modes, this allows you to build your own bits of hardware and experiences. I didn’t use this much, but it definitely extends the shelf life of the Labo VR kit. Well, if you’re creative and curious.

It… kinda made me nauseous

This is a tough one to judge. VR always make me feel ill. Normally after about ten minutes of use I have to take a break, then it takes a while before the sickness passes. I had the same experience here.

Is the Labo VR kit worse than similar bits of the tech in this regard? Not in my experience, but if you’re sensitive to VR, it’s going to make you feel unwell. Not really much anyone can do about that.

The screen quality is only okay

The VR goggles magnify the Switch’s screen and… this doesn’t give the best quality experience. Still, while the pixels are quite large, it doesn’t really detract from the whole experience – it’s just clear the Switch wasn’t made with VR in mind.

Everything about the Labo VR kit made me feel like a kid again. It’s like a way more entertaining version of building Ikea furniture.

My major issue is longevity. Once all the Toy-Cons are built, will you keep coming back? Possibly not.

Ultimately, the Labo VR kit is a prime example of why I love Nintendo. It’s a weird and inventive product that almost no one could’ve produced. Is it going to change your views on VR? Not one bit, but it is fun, if somewhat flawed.