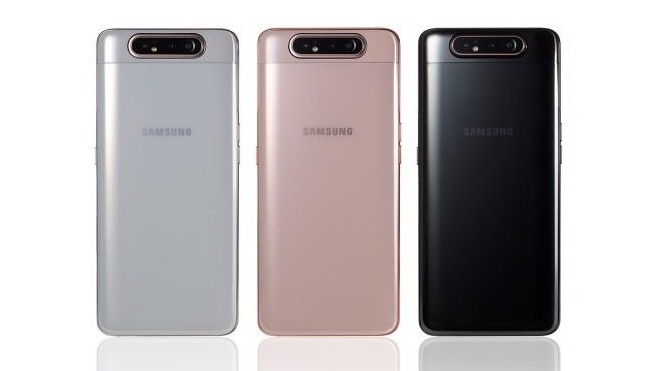 At an event in Bangkok, Samsung today announced a swathe of new phones for its mid-range ‘A’ line. These middle-of-the-road phones are decidedly conservative in nature. They seldom break ground, instead choosing to offer respectable specifications without breaking the bank.

I said “seldom,” because the Samsung Galaxy A80 bucks that trend in the most spectacular way possible, and it’s all thanks to the phone’s impressive rotating camera mechanism. This allows users to take selfies using their phone’s array of rear-facing cameras, while also enjoying a 6.7-inch FHD+ Super AMOLED display that’s completely notch-free.

Here’s how it works. A bit like the Huawei Honor Magic 2, the Samsung Galaxy A80 uses a slider mechanism. Except, instead of having two separate camera elements, there’s just one camera. This automatically rotates depending on whether you’re taking a selfie or not. If you’re finding that hard to visualize in your mind’s eye, check out this hands-on from Unbox PH’s Lea Cruz.

This mechanism is certainly interesting, but I’d be interested to see how it holds up over time. Will it still function properly at the end of a typical 24-month contract? It’s a legitimate question. Unlike solid-state mechanisms (like the dreaded notch), mechanical systems rely on moving parts that are subject to wear-and-tear and require maintenance.

As for the camera itself, the A80 boasts a 48MP primary shooter. This is paired with an 8MP ultra-wide-angle lens, as well as an 8MP 3D depth-sensing camera.

Over the years, Samsung’s developed a solid reputation for photographic excellence. It’d be interesting to see if this is carried into its latest mid-rangers. While 48MP certainly sounds impressive, it’s worth mentioning that cameras with large megapixels counts can struggle in low-light conditions.  Only real-world testing will tell.

Storage wise, users get 128GB to play with. Sadly, that’s not extensible with a MicroSD card. That’s likely going to be a nuisance for especially snap-happy users. Based upon my experience with the Honor View20, 48MP photos can be pretty big, often measuring 5MB apiece. If you take a lot of them, you’ll quickly find yourself running low on space.

Under the hood, there’s an octa-core Exynos platform, consisting of two 2.2Ghz cores and six 1.8Ghz cores. This is accompanied with a reasonable 8GB of RAM. On paper, the Galaxy A80 isn’t a slouch. It’s also comes with sufficiently sizable 3,700 mAh battery, which supports 25W fast-charging.

Finally, the Samsung Galaxy A80 uses an under-screen fingerprint reader. These are increasingly common across the mid-range and beyond. Although earlier efforts were a bit ropey, they are fortunately getting better in terms of responsiveness and accuracy – although I’d still maintain they can’t hold a candle to normal hardware-based fingerprint readers.

Broadly speaking, the Samsung Galaxy A80 is a somewhat respectable mid-range phone. What makes it special is its unique approach to ditching the notch, which builds on previous slider-based efforts, like the Honor Magic 2, Xiaomi Mi Mix 3, and the OPPO Find X.