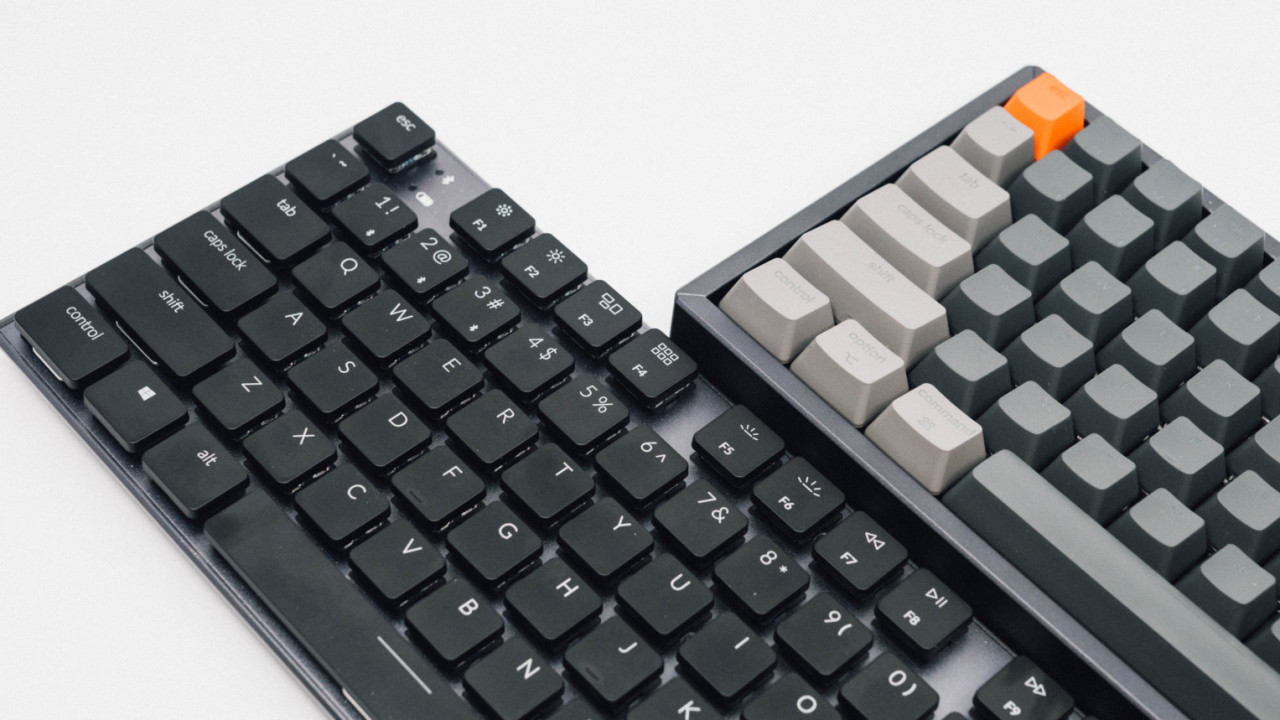 If you spend most of your day typing, you need a good keyboard. Thankfully, there are good keyboards aplenty nowadays. Entire forums and YouTube channels are dedicated to mechanical keyboards, and people obsess over the feel of numerous switches and keycaps.

Despite all this, it’s surprisingly hard to find keyboards that do all the things I want. Specifically:

Then Keychron offered to send over its K1 and K2 keyboards – the former with low-profile switches, the latter with standard ones. It was like someone had read my mind. Here were two solid mechanical keyboards that, for once, weren’t designed specifically for gamers and came with Bluetooth and USB-C. The price was reasonable, with the K1 starting at $74 (plus shipping). They’re also two of few mechanical keyboards designed with Mac users in mind – they come with keycaps for both Windows and Mac users.

I spent most of my time with the K1, as the K2 isn’t on the market yet (my K2 sample is a pre-production unit). The keyboards are functionally very similar though, so more on the differences later.

My first impressions of the K1 were encouraging. It looks and feels like it was made by people who care about industrial design. Mine came in a classy space gray, though it currently appears to only be available in black. It has an elegant, legible typeface. It feels nice and weighty. And perhaps best of all, it’s devoid of any visible logos.

The one concession it makes to the typical gaming crowd is an RGB lighting configuration, though that’s a $10 premium over the white LED model. It’s a basic RGB setup though – no more advanced than what you might find on cheap RGB keyboards elsewhere. You can cycle through a few color options and effects. I just left mine on light blue or white most of the time, but it’s nice to have options.

More importantly, my typing experience on the K1 was near-perfect from the get-go – it’s the happy medium between laptop and mechanical keyboards I’ve been looking for.

As much as I love good mechanical keyboards, I’ve spent most of my adult life typing on laptop-style chiclet keys, and to some extent, I find their lower height more comfortable. The K1’s low profile ‘Fraly’ switches feel like a good scissor switch and a Cherry MX Blue had a baby. They’re about as clicky as a Cherry Blue, but are significantly quieter. They have far more travel (3mm) than most laptop keys, but not quite as much as a traditional switches (4mm). The keyboard sits a lot lower on your desk, and unlike some low-profile keyboards I’ve tried, the keycaps aren’t wobbly.

That said, I do wish they keycaps weren’t quite so flat. Many of the best laptop keyboards have a slight curve or indent to guide your fingers, and it would’ve been particularly welcome here given the extra travel. You also can’t adjust the height on the K1’s base, so you’re stuck to slight the slope of the chassis itself.

Both wired and wireless performance was unremarkable, but I mean that in a good way. I’m not the fastest typist – about 84 WPM on average – but I didn’t notice any particularly delay using a Bluetooth connection, let alone wired. And though it’s not aimed at gamers, the K1 does feature N-key rollover and respond quickly. It should satisfy all but the most hardcore in this regard.

Though Keychron quotes the battery life for the RGB model at just 10 “working hours,” – 15 for the single LED model – I found this translated into several days of use in the real world. Because it uses USB-C, I simply plugged it into my phone charger for a few minutes every now and then; the battery never died during my testing. It should also last several weeks if you avoid the lights.

Alternatively, you could leave the keyboard connected to your PC all the time and use Bluetooth for secondary devices. It allows for three Bluetooth connections, so you can connect it to your tablet or phone if you need to do some serious typing on the go.

One caveat: my K1 test unit had its RGB button below the right shift button, which could make you prone to accidentally switching the lights while typing. Thankfully this has been rectified in the current revision of the K1 as well as the K2.

Speaking of the K2… I’ll keep this section short. Functionally, it’s basically the same as the K1, but in a more traditional compact mechanical keyboard form factor.

Thankfully, it stands out from the crowd with its design. The various shades of grey and a reddish-orange escape button look quite sharp. The text on the letter keys blends subtly into the grey around it, making the K1 almost look like it uses blank keycaps (and allowing you to show off your touch-typing skills). For those of us who do have to look at our keys from time to time, turning on the LEDs makes the writing bright and clear. I also appreciate the lack of empty space on the keyboard, making the K2’s footprint a little smaller than the K1’s.

My unit came with Gateron Blue switches, and the typing experience was unsurprisingly solid – more switches will be available when it goes on sale next month. That said, unlike the K1, there’s no option with a Numpad, and I do wish KeyChron offered more colors options. Still, though I prefer typing on the K1 ever so slightly, the K2 definitely gets my vote for aesthetics.

Despite minor caveats, the K1 and K2 get all the basics right. Bluetooth works reliably, battery life is solid, they connect via USB-C, the design is excellent, and the typing experience is great. Starting at $74 (plus shipping), the price is more than fair. They may not be perfect keyboards- there wouldn’t be such a thriving keyboard community if such things existed – but I think for most people, they tick the right boxes.

If you’re interested in picking up the K1, it’s currently available from Keychron’s website. The K2 will begin shipping in May, but is available to pre-order via a Kickstarter campaign now. While I don’t normallyrecommend products in the middle of crowdfunding, the K1 was also crowdfunded and delivered in a timely fashion. The K2 is already well past its funding goal of $50,000, sitting at nearly $250,000 at the time of writing.