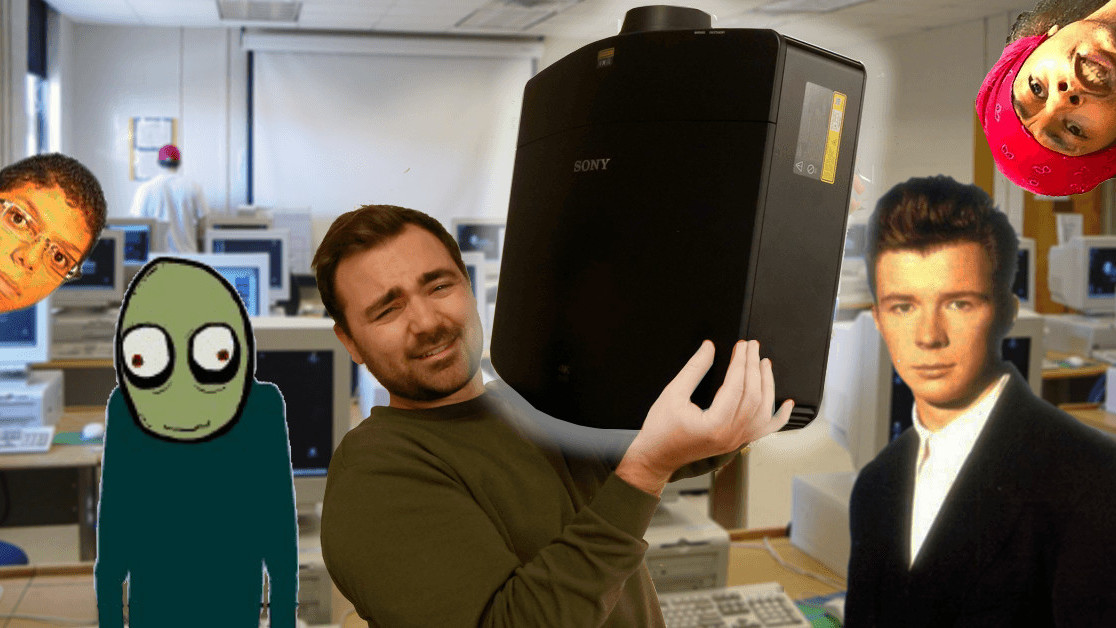 Remember the old days of the internet? When you had to actually load videos? Yes, those times sure were both magnificent and awful times. And this got me thinking – could we combine the worlds? And watch old internet videos on modern new tech?

I mean, yes. Of course you can, that’s a stupid question.

This sounds dumb, but fine. First question: who would buy such an expensive projector?

Sony’s projector is aimed at small venues – such as event spaces – or the home cinema enthusiast. Yes, $35,000 is a lot of money, but this is a serious bit of kit.

Oh, a quick note – this device is known the VPL-VW870ES in Europe (where we tested it) and the VPL-VW995ES in the US. We’re going to use the latter for the rest of the piece.

Got you. So, go on, what are the specs like?

Threateningly hearty. It weighs 22kg, uses a Z-Phosphor laser light source, and has a brightness of 2,200 lumens. In real world terms, this means it’ll work for a home cinema set-up with some ambient light.

The VPL-VW995ES should also operate at peak capacity for at least 20,000 hours of continuous video playing. Oh, and it arrived on a crate in a box like this:

If you want a more in-depth rundown of features and specs, you can find all that information here. We’ve got other business to attend to, like what it’s actually like.

Fair enough. Then, pray tell, what’s the VPL-VW995ES like?

Which is awesome. I don’t want to pay $35,000 for something that’s light. It just seems plain wrong.

In terms of build-quality, the VPL-VW995ES (yes, I’m going to keep referring to it as that) felt great. It was sturdy, well-manufactured, and just felt like a premium bit of hardware.

The projector had a wide range of connections, that – for better or worse – got me excited. In other words, it should make the VPL-VW995ES suitable for anyone. Well, if you have $35,000 you really want to get rid of.

Damn straight. I was also a big fan of the remote. Mainly because the keys lit up blue when you pressed a button. This is obviously so you can control the projector in dark rooms, but it’s more fun if you think of it as a long-lasting glow stick.

Ugh. So, tell me, how good is the picture then.

Taking pictures of projections doesn’t give you a whole load of information (or accuracy), but I did it anyway. What, are you gonna come to my house and stop me?

It mirrored a brand new Macbook Air’s retina display flawlessly, in fine detail, and at a huge size. The image really doesn’t do it justice.

Nice. But what about those videos…

Well, moving images on this beast popped more than champagne corks at New Year. Try to ignore the bad grammar (the titles are lifted straight from YouTube) these are videos I tested the VPL-VW870ES with:

We can all agree it’s an endless run of classics. So, let’s see how it got on… WITH A GIF MASTER CUT!

Beautiful. The colors were rich, the movement was smooth, and they almost looked like they weren’t made over a decade ago on shit equipment.

I’ll put it this way: Sony‘s projector is one of the most beautiful and badass things I’ve used. It straight-up rocks. The picture quality was insane, the device was easy-to-use, and I couldn’t find any major flaws. Of course, I did this watching old internet videos, so do with that information what you will.

Thing is, few people have $35,000 to spend on a projector. If you do? Great! Then this is the device for you and you should definitely buy it. I loved my (short) time with this monstrosity.

But if you, like me, don’t have anywhere near that sorta cash? There’s not much we can do but admire it from afar. Overall though? Wow.

Oh, and one last thing: I really miss the old internet.