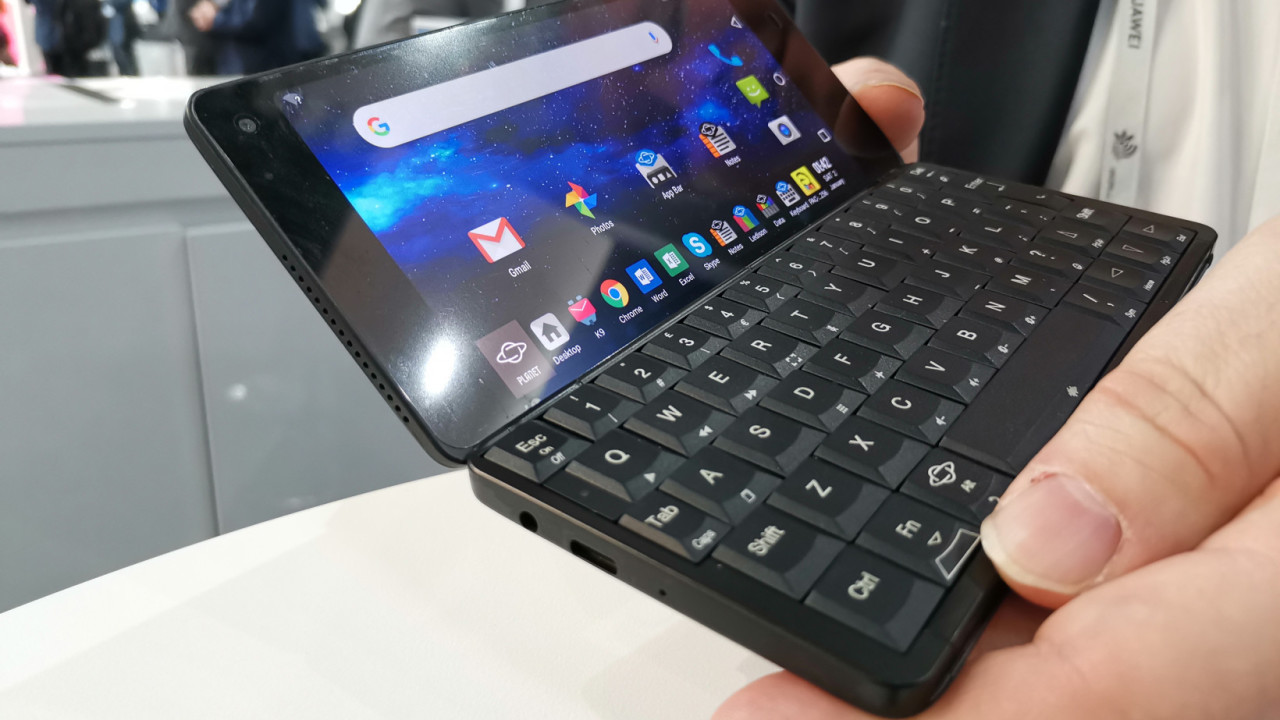 Some ideas are immortal. Take, for example, the humble Psion PDA. Although most people (rightly) thought it died in the early-2000’s, it’s since enjoyed an unlikely revival thanks to the efforts of British firm Planet Computers. Last year, the firm launched its Psion-inspired Gemini clamshell PDA (which we reviewed and liked), and is currently working on the follow-up, the Cosmo Communicator.

During the madness of Mobile World Congress in Barcelona, TNW sat down with Planet Computers CEO Janko Mrsic-Flogel to look at an early prototype. There are several key differences between the Cosmo and the Gemini, perhaps the biggest being that it’s trying to be a better phone.

Although certain models of 2018’s Gemini computer came with a built-in 4G radio and could place and receive phone calls, it was seriously cumbersome to do so. With no LCD screen, you couldn’t see who was calling. Furthermore, to place a call, you’d have to use the device’s Google Assistant-based voice assist feature. This, like any voice-recognition technology, was a bit hit-and-miss, and you’d often end up calling the wrong people.

The Gemini addresses this and includes an outside-facing LCD screen that lets you perform a limited selection of tasks, like the caller ID, control calls, and adjust music playback. This, Mrsic-Flogel explained, mirrors much of the functionality of a smartwatch when paired with a smartphone.

“The key thing with the Cosmo is we wanted to make it an all-in-one communicator,” Mrsic-Flogel said. “It needs to be three things. In today’s world, you it need to be a great phone. It needs to have a great camera. And we wanted it to be a great pocket computer.”

Admittedly, I was a little disappointed Planet Computers didn’t go all-in and offer a secondary screen that could access the underlying Linux or Android operating system. There’s precedent here, thanks to recent dual-display devices like the Nubia X, or the HiSense A6. This would make the Cosmo more useful during the times when it’s not practical to unfurl the device, like when stood in a queue.

One feature – not yet implemented – is the ability to use the rear touchscreen as an ad-hoc mouse for when using the Gemini in Linux mode. This is handy, as few Linux apps are optimised for touchscreen environments. Plus, it means you’re less likely to cover the main display with unattractive fingerprint smudges.

Above the LCD display is a 24-megapixel camera. Although this serves as the Cosmo’s main camera, it can also be controlled with the touchscreen to take selfies. We haven’t seen any samples yet, so we can’t attest to the quality of the snaps. While it stands tall in the megapixel count, the lack of a secondary camera means you’ll probably struggle to take bokeh-filled portrait pictures.

The Cosmo comes with the ability to connect the phone to a monitor and peripherals, similar to Huawei’s Desktop Mode and Samsung’s DeX software. This, arguably, makes the product a lot more compelling. You could be composing a document on the Gemini during your commute, and when you get to the office, you’d just have to plug in a USB-C hub to finish it.

Given the overarching goal behind the Cosmo is to create a pocket computer, being able to dock it and use it as a normal laptop seems like a no-brainer. The demonstration seen by TNW was smooth, and showed multiple apps, like Firefox and Microsoft Excel, being used simultaneously. Admittedly, it was a bit sluggish, with some lag as application windows were resized, but this was within tolerable limits. It’s a bit unreasonable to expect PC-level performance from a mobile device running on a mid-range MediaTek chip. That being said, it would have been nice to see a more potent SoC, especially considering the high price it commands.

The keyboard was the best part of the Gemini, allowing you to bang out emails and blog posts with ease, thanks to its comfortable travel and haptic feedback. The Cosmo improves upon it with the addition of backlighting, making it easier to work at night. There’s also a fingerprint reader, which lets you log into the operating system, and authenticate with banking apps.

In terms of specifications, the Cosmo comes with 6GB of RAM (compared to the Gemini’s 4GB), 128GB of storage (doubling the Gemini’s modest 64GB), and an octa-core 2Ghz MediaTek P70.

As with the Gemini, Planet Computers is crowdfunding the Cosmo on Indiegogo, where it’s raised over $1.3 million at the time of writing. Interested punters can pick up a device at the reduced price of $569. There’s also a slightly gaudy gold edition, which retails for $1,999. Perhaps the perfect present for the productivity-obsessed Russian oligarch in your life?

Units will ship to backers in June, and according to Mrsic-Vogel, the Cosmo will reach general retail availability by Q3 2019. If you can’t wait, you can pick up a 4G-enabled Gemini on Amazon in the meantime for £599.99.