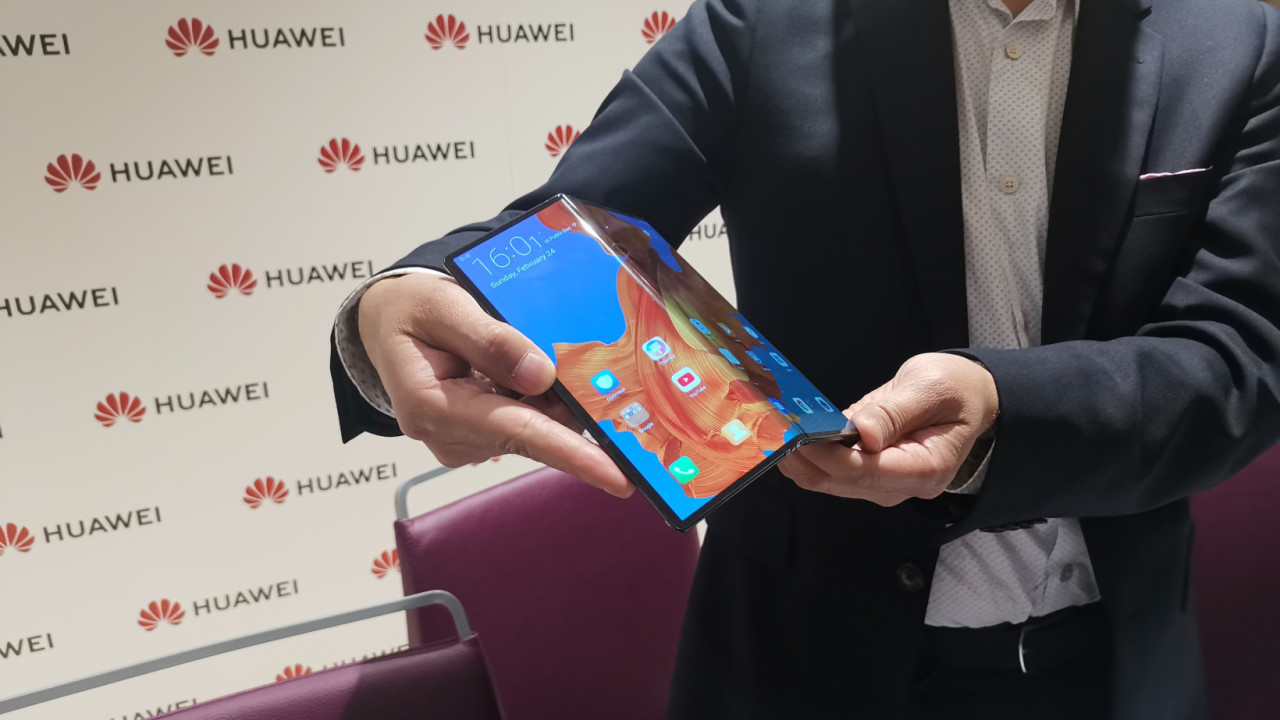 When Huawei decided to unveil its latest phone in the surroundings of Barcelona’s ornate Museu Nacional d’Art de Catalunya, it was undoubtedly dropping hints to the attending tech reporters for what they’ll see. After all, the Huawei Mate X, announced today, is a bit like a rare Picasso painting.

For starters, it’s gorgeous. Not pretty – that’s a bit diminutive. Gorgeous. It’s got arguably the most drool-worthy industrial design of any phone I’ve seen in my seven years of covering tech. It’s the product of deep contemplation and imagination by Huawei, manifestly pushing the boundaries of what smartphones can be.

And yes, a bit like a Picasso, it’s arse-clenchingly expensive. The Mate X is the Le Rêve of phones. But perhaps, given what’s on offer, it can justify its steep asking price.

The Huawei Mate X has one display which can transform into three distinct configurations. The first is an 8-inch tablet mode. This is an almost perfect square, with an 8:7.1 aspect ratio, and a 2,480 x 2,200 resolution.

Because the screen is on the “outside” of the phone, when the device folds over, you end up with two screens. The front-facing screen offers 6.6-inches of edge-to-edge real-estate, complimented by a 19.5:9 aspect ratio, and a 2,480 x 1,148 resolution.

There’s also a rear display, which offers fewer screen inches, as it contains the device’s cameras and handle. You’ll primarily use this for taking selfies. This bit offers a decent (but narrow) 6.38-inches of screen size, at a somewhat compressed 25:9 aspect ratio and a 2,480 x 892 resolution.

When the phone is folded, it measures 11mm thick, and unlike the rival Galaxy Fold, there isn’t an unwieldy tell-tale gap. It’s completely flat, and snaps together with a satisfying click. I’d be interested to see how well it stays together though, or if it accidentally unfurls when thrown into a handbag, for example.

When unfolded, the Mate X measures 5.4mm thick, which is marginally thinner than the iPad Pro.

Running across the side of the Huawei Mate X is a handle (Huawei’s term, not mine, but it’s reasonably descriptive, so I’ll use it). This contains the phone’s three cameras, including one using Leica’s hardware. This wasn’t a surprise. The same configuration has appeared on all of Huawei’s phones since the P20 Pro. It would be weird if Huawei cut corners here on such a groundbreaking device.

You’ll notice that there isn’t a dedicated front-facing selfie camera on the phone. That’s because the three primary cameras are the selfie cameras. To take a picture of yourself, you just need to fold the phone and flip it over.

That’s pretty exciting. Huawei’s premium phones are regularly ranked as having the best cameras on the market. Although the company didn’t share any camera samples during the event, I must admit I’m excited about the prospect of being able to take a selfie with the Mate X’s constellation of high-end cameras, augmented with the company’s Master AI software.

And because the “rear” of the device also contains a screen, you can use this when taking pictures – for example, to give the subject of a photo a preview of what it’ll ultimately look like.

Huawei says there isn’t a camera bump on the Mate X. This is welcome news, both in terms of look and feel, as well as overall durability. The latter is something that the company has focused on, announcing a specially-designed protective case with the phone.

It’s important to remember that Huawei isn’t just a phone maker. It’s got fingers in a whole host of pies, including SoC design. Therefore, it’s no surprise that the Mate X uses Huawei’s Kirin 980 silicon for its processor, as well as its Balong 5G modem.

The latter is especially interesting, as Huawei promises that it’ll more than double the performance of modems from rival firms, like Qualcomm’s Snapdragon and Samsung’s Exynos offerings. Deep-pocketed punters will purportedly be able to take advantage of 4.6Gbps download speeds, swallowing a 1GB movie in just three seconds. Of course, we haven’t been able to independently verify that (and, for that matter, neither has anyone else), so take that with a grain of salt.

The Mate X is a dual-SIM phone, with one slot supporting 5G, and another limited to just 4G. If you don’t need the latter, you can just whack in a Nano Memory (NM) card and add some extra storage. That being said, the base phone comes with 512GB of storage. Even the most enthusiastic film-hoarders are unlikely to use all that.

With such a large screen to power, you’ll be glad to know that the Mate X comes with a pretty gargantuan battery. It has two cells which, in total, measure up to a respectable 4,500mAh. Sadly, there aren’t any battery benchmarks right now, so I can’t tell you how that translates into real-world usage.

The company did share that the Mate X comes with a 55W supercharge feature, which can refill the phone’s battery to 85 percent in just 30 minutes.

In terms of software, the Mate X runs Android 9.0 Pie. A Huawei representative told TNW that the company’s Desktop Mode software will be available for its newest foldable phone, allowing it to be used as a smartphone, tablet, and desktop computer.

The Huawei Mate X is arguably the most important phone ever unveiled by the ascendant Chinese tech brand, and not merely because it cements its reputation as an innovative premium phone manufacturer. This handset realizes more than three years of research and development efforts from the company, and enmeshes advances in both materials tech and communications hardware.

With that in mind, don’t be surprised that it’s really bloody expensive, with prices starting at €2,299 ($2,612). When Huawei CEO Richard Yu dropped that bombshell, the silence from the crowd he previously enjoyed was replaced with a crescendo of murmurs. It costs how much?

Huawei isn’t oblivious to the Mate X’s steep cost, and during the talk, Richard Yu said that the phone was priced to reflect the high cost of the device’s research and development. The patented hinge dividing the two displays, he explained, was the process of a three-year development process, and contains over 100 distinct parts. That kind of R&D isn’t cheap, and it’s inevitable that costs will get passed on to the punter.

Two things are inevitable though: firstly, that there will be no shortage of enthusiastic early-adopters that are prepared to drop the price of a used car on a phone. There’s an undeniable allure in being among the first to have something. Although Huawei won’t be able to take advantage of volumes (as it does with its cheaper phones), it’ll absolutely kill it in margin.

Secondly, prices will inevitably go down. Perhaps not for this phone, but certainly for foldable phones in general. In the grand scheme of things, €2,300 phones will be seen as an aberration more than anything. This’ll be driven by several factors, ranging from inevitable economies of scale, to competition from other upstart brands like Xiaomi and Oppo, who are both making confident inroads into the West.

Huawei didn’t say how much it’ll cost in the UK, but if I was a betting man, I’d say that it’ll be about £2,300. This guesstimate considers previous pricing trends, the UK’s steep sales tax, and the ongoing decline in the pound.

Yu failed to mention any plans to release the Mate X in the United States. That’s not surprising. The company seldom launches phones in the US. The Mate 20 Pro, which until recently was the best Android phone money could buy, was completely absent from the US market, forcing American consumers to import devices from abroad. This could push prices further for stateside users, who’ll potentially be forced to pay steep customs duties and taxes.

Huawei says that the Mate X will be released halfway through the year. Sadly, it wasn’t more specific than that. I guess we’ll just have to wait and see.