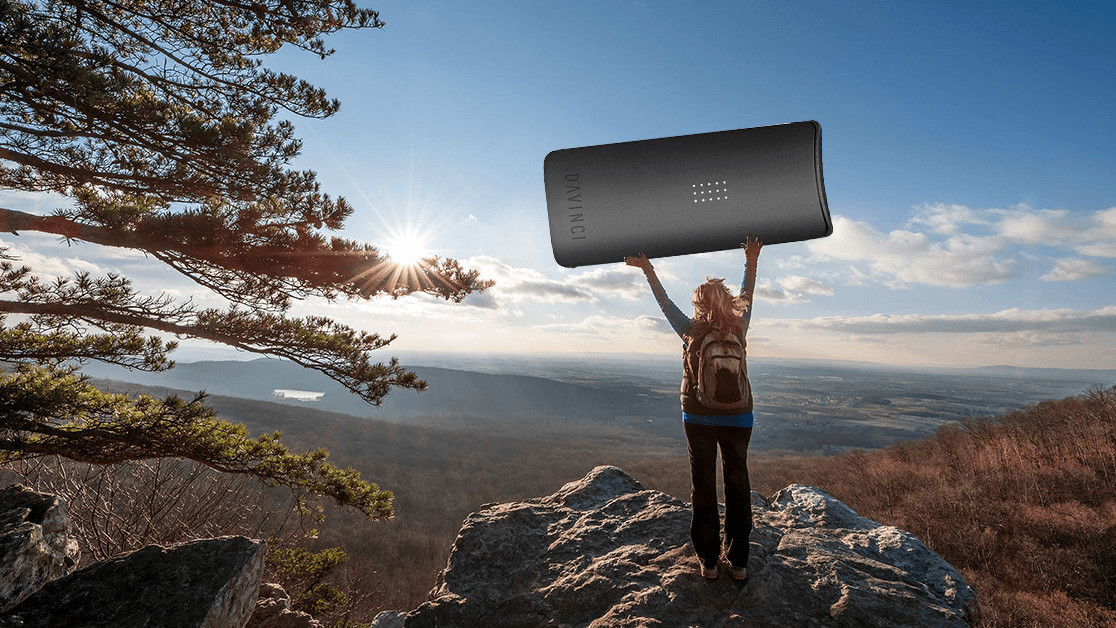 Vapes are the future of weed consumption. I know it, you know it, and your mom probably knows it too (what, you think she didn’t get what was happening all those times you stumbled into the house with bloodshot eyes? Come on).

While there are plenty great dry herb vapes out there, the Davinci IQ is one of the best. So, when we found out the company was releasing an even smaller version of the vape – the Davinci MIQRO – we knew we had to try it.

And we did. And it’s very, very good.

Well, according to the company, the MIQRO is 33 percent smaller than the IQ. Apart from that, it looks virtually identical to the previous iteration:

As you can see, it is smaller than the IQ, but has a very similar look.

But does it work the same as the IQ?

Yep, it’s almost identical. The only thing you can’t do on the MIQRO that you could on the IQ is customize the smart paths. These are specific temperatures you can select using a button on the side of the device. I didn’t find this offputting at all though.

Aside from that, things are much the same. The MIQRO has two compartments: one on the top and one on the bottom. The former is where you suck that sweet weed smoke from and contains the battery access point.

The bottom compartment has a chamber you put your bud in. One of my criticisms of the IQ was that the magnets didn’t hold the compartment lids down firmly enough for my liking, causing the lid to occasionally rise when smoking. Thankfully, this appears to have been fixed on the newer model.

The MIQRO still uses conduction to heat up the weed, the same method as the IQ. Basically, this means the side of the chambers warm up and cook the marijuana, as opposed to convection, which uses air.

Convection is generally seen as the premier way to burn marijuana for smoking, but Davinci used a clever trick in its vapes to improve its conduction method. How? Through the use of a zirconium pearl, something you can see pictured below. This increases the heating surface area, which helps the company’s devices deliver a better smoke.

Both the IQ and the MIQRO have these, but the latter has a new, clever little feature: an adjustable pearl. If you twist it, the pearl moves up and down a screw-esque protrusion. This changes the size of the oven, reducing it up to half of its original size. In other words, you have more control than ever over how much weed you smoke at a time.

It’s a great idea and works well, but it does feel flimsy. Despite this, I’ve never had any problems with the pearl falling off, so maybe my reservations are unfounded.

How well does it smoke?

I’m a huge, huge fan of the MIQRO. Massive props to Davinci for delivering a smoking experience that’s as good as the IQ in such a small device – it’s very impressive.

The MIQRO takes about a minute to heat up (of course dependant on what smart path you’re using), but it does take longer to do so than the IQ. When it’s ready to go, the MIQRO delivers nicely sized vapor clouds and a clean, full taste. I also found that the pathway needed cleaning a bit less often than the IQ. Generally, I found the bigger device was more likely to leave weed residue on my lips or tongue – especially after prolonged use without much care.

I’ll put it this way: the MIQRO got me high real good.

Nice. This pretty much sounds like the perfect portable vape

Yep, the MIQRO is excellent, but there are a few things that could be improved. First off, the device itself gets too hot. This doesn’t impact its use a large amount (apart from the occasional bout of “hot lips”), but it is irritating.

Secondly, it has an auto-shutoff feature that powers down the Miqro after five minutes. I don’t mind this per se (as it does help save battery life and you can turn it back on very easily), but there’s no way to disable this feature. Or, if there is, it’s not in the manual or easily findable resource. Again, it’s more of an annoyance than a deal breaker.

The biggest issue I had with the Miqro though was battery life. As you can see in this photo, the thing’s pretty small:

While most of the vapes I’ve used would last at least an evening’s smoking, the MIQRO needs charging after four or five smokes. Even considering the size, this isn’t good enough.

There is a solution to this though. I only had the standard kit, but if you pay an extra $50, you can pick up the Explorer’s version. This includes an extra battery, alongside a range of other accessories, like a case for the device, a weed storage tube, and extra parts for the MIQRO, just in case you misplace them.

If you’re going to get a MIQRO, I’d suggest you shell out a little bit more and grab the Explorer’s Kit.

Who’s the MIQRO for then?

Basically, anyone who loves smoking weed, and wants a discrete, portable vape. It’s that simple.

I’m a big fan of the Davinci MIQRO. It’s wonderfully crafted, looks great, and delivers a great smoke. Its only real issue is the battery, but thankfully that’s solvable if you pick up the Explorer’s Kit. Still, I hope this is something that’s solved in future upgrades.

So, if you’re on the hunt for a stylish and easy-to-transport weed vape, you could do far worse than the MIQRO.

You can grab yourself one here. Happy smoking!