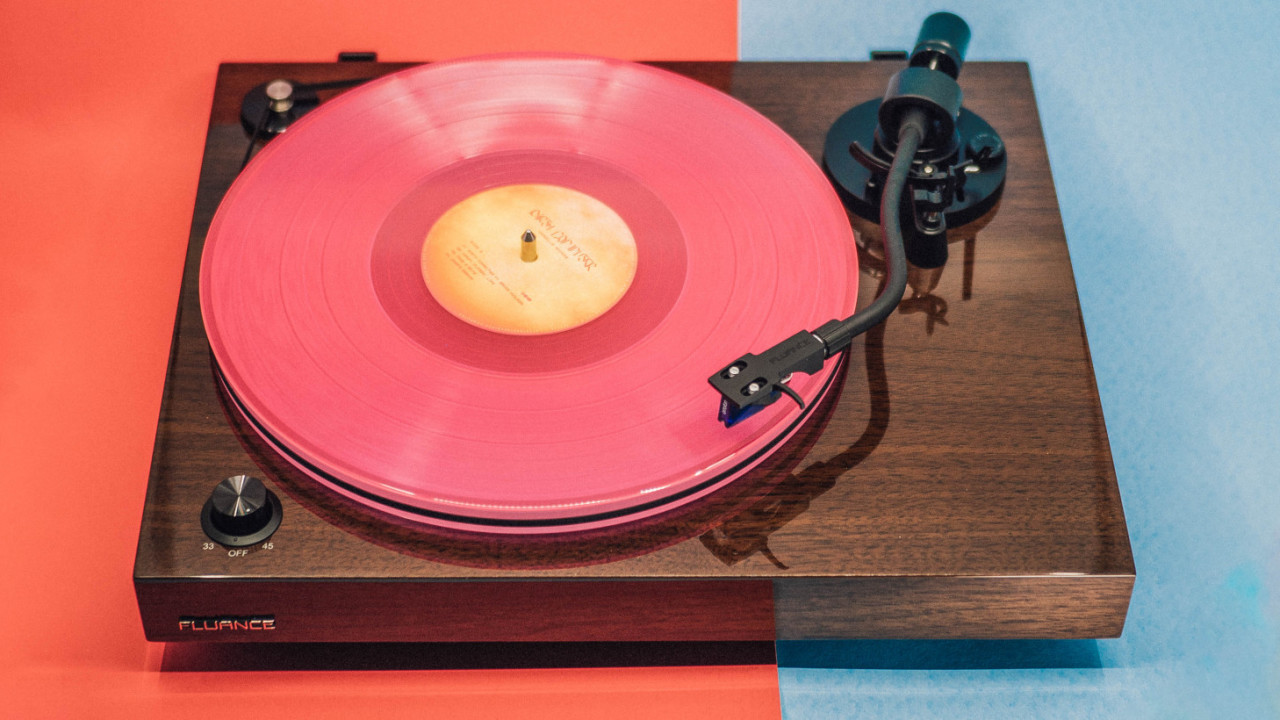 I have a bit of a confession to make. I’ve spent more money on audio gear than I care to admit… but I’ve never been that much into vinyl.

Sure, I’ve owned some budget tables over the years, and I’ve quietly admired the Regas, Technics, and VPIs of the world at audio events. I appreciated their value for those with extensive vinyl collections, or simply for the experience of the album art and ritual of placing a record on a platter. But as someone who grew up with the convenience digital era, I never felt compelled to invest in a fancy turntable.

Then Fluance sent over the RT85, the $500 flagship of its new ‘Reference’ turntable family. I think I get it now. The RT85 is a beautiful, well-thought-out table, and for this vinyl noob, its sound quality was good enough to make me something of a convert.

This merits a quick disclaimer: I’ve tested oodles of audio gear over the years, but turntables aren’t my expertise. Audio reviews thrive on direct comparisons, and I haven’t spent enough time with decent turntables to tell you whether to buy the RT85 over something else. Other reviewers will be able to do that, but for now, I hope this review can prove valuable from the perspective of a newcomer to hi-fi turntables, or other vinyl noobs looking to make a purchase.

That out of the way, if you’re not familiar with Fluance, the Canadian audio company has made a name for itself by offering high performance per dollar. Its speakers are strong performers for the price – I quite liked its Fi70 a couple of years ago – and its previous turntables, the RT80 and RT81, were often recommended to beginners.

Then in December, Fluance announced four new tables, ranging from the $300 RT82 to the $500 RT85 that is the star of this review. They are all variants on the same design, different only in your choice of platter material and cartridge (the bit that ‘reads’ the turntable). That means you could upgrade the RT82 to the RT85 down the road by swapping those two components.

At the more affordable end, the RT82 and RT83 use an aluminum platter, with a rubber mat. The RT84 and RT85 use a heavier acrylic one that should better maintain speed consistency and reduce unwanted resonances (acrylic has similar resonance properties to vinyl). I haven’t heard the metal platter to tell whether the acrylic is actually better, but it definitely looks cooler.

The more immediate difference is in the cartridges. Fluance offers three popular ‘moving magnet‘ cartridges from Ortofon: the OM 10 on the RT82, the 2M Red on the RT83 and RT84, and the 2M Blue on the RT85. The pricing structure reflects the relative performance of the cartridges, and I recommend you read reviews and comparison of each online to see which suits your needs. But if none of these tickle your fancy, you could also just buy the RT82 and install your own aftermarket cartridge.

Each of the reference models shares the same wooden plinth, in your choice of a glossy black or a real wood veneer. I went for the wood, and it’s gorgeous – especially with the acrylic platter – in a slightly anachronistic way. I do wish there were more color options or a lighter wood for my more modern design sensibilities, but it should look classy in any home.

Below the plinth, you’ll find three adjustable, pointy feet. New to the Reference series, these allow you to easily level the turntable (a little bubble level is included in the box) while reducing the vibrations transferred from the surface it’s placed on. It’s certainly a lot easier than leveling your media console.

The RT85’s other headlining feature is its new servo-controlled motor, which is supposed to eliminate speed variations – a potential annoyance in turntables using belt-driven platters. The servo monitors the motor’s speed and makes adjustments to maintain a consistent 33 or 45 RPM. With the acrylic platter, Fluance claims a variation of just 0.10% – which is excellent for the price. I used a free Android app to measure the speed variation myself and got 0.12%; for a highly unscientific test, that’s good enough for me.

Despite the entry-level price, the Reference series isn’t one of those increasingly popular do-it-all turntables. You won’t find fancy features like Bluetooth or USB here. There’s also a bit of prep before you can begin playing music.

For one, you’ll have to supply your own phono preamp – the component that amplifies and equalizes a turntable’s faint signal into something usable for a typical sound system. Unlike the RT80 and RT81 – and like most high-end turntables – the Reference tables don’t come with one built in. Lastly, you’ll need to calibrate the tonearm manually for your particular cartridge, for which Fluance provides an easy-to-follow guide.

Once that was all done and I got the music playing, the experience was a bit of a revelation. It’s likely there’s some degree of confirmation bias at play, but I finally understood why some people have such an affinity for vinyl.

Going into this review, I did not expect my records to sound better than their digital equivalents, and generally, that wasn’t the case. Vinyl’s disadvantages are well-documented, ranging from inconsistent frequency response, to surface noise, to the fact you literally degrade your records every time you play them.

But vinyl’s experiential advantage – the way it forces you to pay attention to your music – is well-documented too. Allow me to quote one of my previous articles:

As you navigate through your record collection, you appreciate the 13-inch wide album art in a way that’s nearly impossible on your phone or PC. You place the record onto the platter, lower the stylus onto the outer rim, and wait with anticipation until the music starts to play.

You sit at your couch, listening attentively, or perhaps you do some work around the house. Either way, you’re compelled to listen to the entire album and re-engage with the music when it’s time to flip over to the B-side. Even when you’re not listening to music, you need to care for your records to ensure they last years.

Compare that ritual to simply opening up Spotify, playing your weekly mix, and leaving it at that. It’s more convenient of course, but it certainly doesn’t encourage you to listen in any meaningful way.

You will also occasionally find that older recordings are mixed better for vinyl, as the format’s physical limitations forced a certain degree of care with mixing that isn’t necessary with digital.

But on the whole, rather than expecting my music to sound better with the RT85, I was hoping it would cross quality a threshold. In other words, I hoped the music would sound good enough that vinyl’s inconveniences would be worth it – that it might provide a different sort of audiophile experience. At this, the RT85 passed with flying colors. I knew vinyl could rival digital with some of the four-digit turntables, but the RT85 showed me it could also sound fantastic at an attainable price.

For vinyl nerds, the Ortofon 2M Blue is only an upper-middle-range cartridge, but for someone who’s mostly listened to cheap and/or integrated cartridges at home, I was taken aback by the transparency it exhibited on the RT85. This wasn’t just the ‘warmth’ and ‘smoothness’ stereotypically associated with vinyl (and indeed, my old cheapo record players). I was able to hear details and nuances in the music that were normally lost on cheaper tables and rivaled digital recordings.

I was particularly impressed by the soundstage when comparing some records to their digital equivalents. On some albums, there was a sense of space, clarity, and separation that I preferred to digital. This was apparent despite the fact I was listening through a pair of KEF LS50W, which digitize the analog signal before playback.

A vinyl pressing of Stephen Sondheim’s 1981 “Merrily We Roll Along,” for example, sounded so very-obviously better on the RT85 than streaming from Tidal that I had to relisten several times just to make sure I was hearing things right. On the vinyl, I had a better feel for the singer’s positioning in 3D space, and everything just sounded more cohesive.

With some of my Beatles records, it varied per track. Some of them sounded better on the vinyl, others I preferred on digital.

On a contemporary album like Janelle Monae’s “Dirty Computer,” the sound was a little less dynamic, the synth bass beats a little less taut.  But coupled with that “vinyl experience” I was talking about – including a snazzy translucent pink record – it felt like I was rediscovering an album I’d heard a hundred times in the past year.

The same was true of most music I listened to on the RT85. It didn’t always sound better than high bitrate digital in direct comparisons, but the RT85 crossed a good enough threshold that meant I was willing to sacrifice some convenience and quality for the experience. Digital is superior for everyday listening, but vinyl is allowing me to rediscover some of my favorite tracks. That’s worth the hassle.

One note of caution though: if you’re new to decent turntables, you might make the assumption that a better system would reveal less of vinyl’s cracks and pops. If anything, the opposite is true. The 2M Blue may reveal details in my music a way that approaches digital, but that extra high-frequency information also makes surface noise more apparent than cheap turntables. It sounded clean on fresh records, but otherwise, investing in a decent record and stylus cleaner is a must.

With any audio purchase, I always recommend you try before you buy and make comparisons where possible. But given Fluance’s mostly-online presence, that’d be difficult. It’s a good thing, then, that the RT85 sounds so good to this vinyl noob.

It’s fairly-priced too, considering the Ortofon 2M Blue goes for $236 on its own. For $500 total – less if you opt for one of the cheaper configurations – the Reference turntable should keep you satisfied for a long time, and it’s nice to know you could easily upgrade the cartridge when you’re ready for something fancier. I just wish Fluance sold a cartridge-less option for people to mix and match.

I can’t tell you whether the RT85 is the very best option in its price range, especially considering how many decent turntables and cartridges you can find used for cheap. But I can say that the RT85 sounds good enough that I don’t feel like I’m missing out versus digital.  Of course, I won’t stop streaming music anytime soon, but I think my vinyl collection is about to get much bigger.