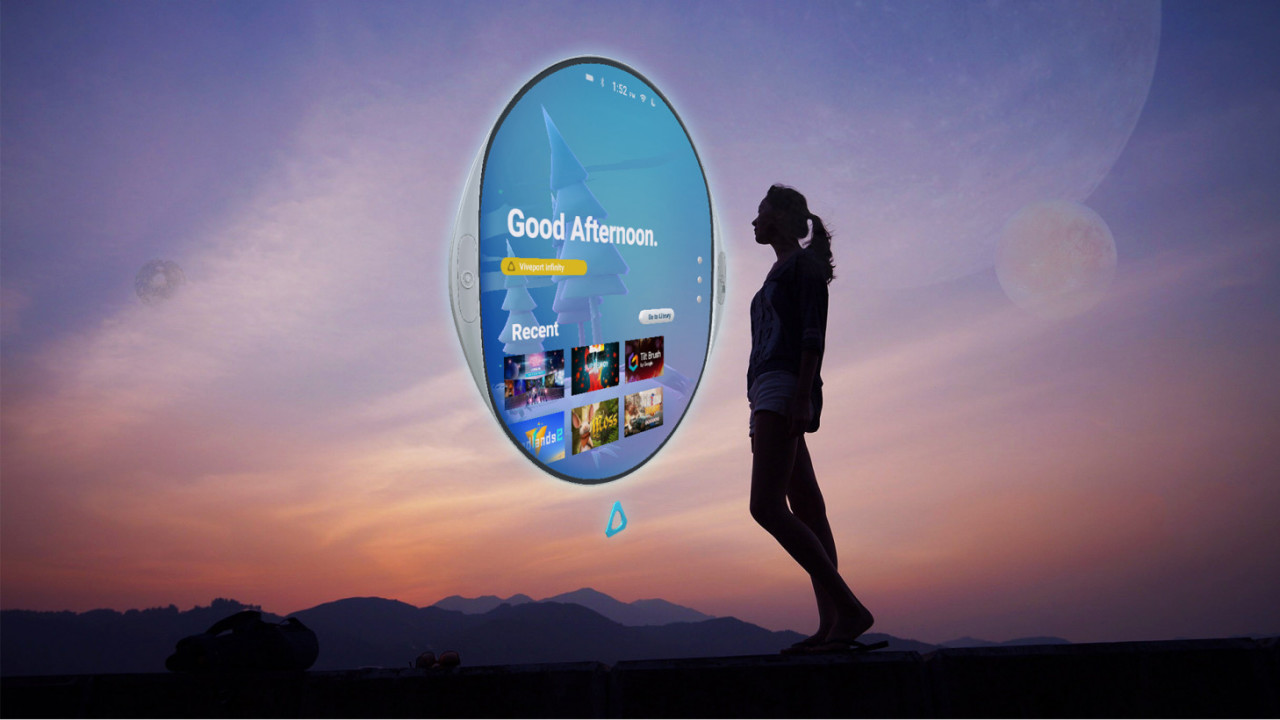 Okay, so we’ve all heard that one before. Despite the fact analysts predict it’ll be a great year for VR companies, the tech is still a novelty to most. HTC hopes to change that by finally addressing VR‘s biggest problem: a disjointed user experience.

HTC unveiled a slew of updates to its Vive platform earlier this week during its presentation at CES.

The biggest splashes came in the form of the new Cosmos hardware (an Oculus Go/Quest competitor) and a new eye-tracking system to be debuted in an update to the Vive Pro called “Vive Pro Eye.”

Eye-tracking is a big deal for VR. The Vive Pro Eye, according to HTC, will accurately monitor users’ eye movements inside the headset.

Note how the above image shows there aren’t any normal Vive controllers attached to the headset. The baseball bat has a tracker mounted on it, but all menu navigation is handled by eye-tracking.

Traditionally, VR developers have used head-tracking to navigate menus in VR by fixing a virtual pointer to the center of the headset and having the user turn their entire head to select a virtual object. But, with eye-tracking, it’s a simple matter of just looking at the menu item you wish to select.

The technology could also facilitate foveated rendering, a fancy way of focusing computer resources on producing the best graphics where the user is actually looking. This should help make games look better and run smoother on less powerful computers.

Vive Pro Eye will be available in Q-2 2019, while HTC says it’ll release the Cosmos later this year.

The Cosmos and eye-tracking grabbed all the headlines, but they weren’t the most exciting Vive announcements if you ask us. That distinction belongs to Viveport Infinity, Vive Reality System, and the newly announced Mozilla/Amazon/HTC partnership to build a better internet browser for VR.

Viveport is one of the more disappointing subscription gaming packages out there. Its library doesn’t contain every VR title available on Vive, but among its hundreds of titles there are numerous top-tier games and apps. Unfortunately you can only choose five games a month, and there’s no exchanges if you decide you don’t want to play one of them for 30 days.

Viveport Infinity removes the five game restriction and gives you complete access to the entire subscription library, much like Xbox Game Pass.

This doesn’t address the fact that VR is boring unless you’re actually engaged in a title, but it does at least give you more titles to try. And, considering the vast majority of VR titles – even the good ones – are usually pretty short experiences, this is the first time the subscription makes sense.

Viveport Infinity should be available starting starting April 5. Pricing has yet to be announced.

More importantly however, Vive is launching a better jump-off point called the Vive Reality System. At first it’ll only be available with the Vive Cosmos, but eventually it’ll be the standard Vive experience across devices.

We’ve set out this year to refine VR for consumers and businesses, delivering hardware, content and platforms so that there’s more to do in VR than ever before. This year at CES, we completely reimagined the way people experience the virtual world—from hardware, to unlimited content with Viveport Infinity, to the the total user experience with Vive Reality System.

Right now, it’s typically easier to launch a game from your computer desktop and then slide your headset on. It’s simply not intuitive to go into VR first, where you’re standing in front of a giant screen that’s either too close to navigate comfortably with gestures or too far away to read.

If HTC can make the experience of transitioning between titles more intuitive, and make the world we enter before we even load a title seem more alive, we might finally have a reason to put the headset on every day.

Finally, HTC also announced a partnership with Mozilla and Amazon to create a new kind of web browser built from the ground up for VR. This is probably the least sexy of the company’s CES announcements, but it’s sure to provide the biggest immediate benefit to VR users.

The best web navigation method (across platforms) we’ve found, so far, is using the Oculus Rift’s recently implemented in-VR desktop display. It allows you to take your entire computer desktop and display it as a screen within your VR world. This is the best, but that doesn’t mean it’s any good.

It feels a bit silly to try and work with your desktop in VR when it’s much, much easier to just pop the headset off and look at your computer monitor. Typing on a virtual keyboard, for example, is an exercise in swinging controllers like drumsticks, but in slow motion so you can hit the tiny little letter blocks hovering in front of your face. It’s worse than typing on a smart phone with big thumbs.

A browser built specifically for VR should address these issues.

We’re excited to work with Amazon and HTC to ensure that the web is the best way to experience 3D content from the internet on the best VR devices in the market. We are bringing Firefox Reality to this platform to ensure that users have a safe, fast, and private experience on the next generation of hardware.

The Vive-dedicated VR browser will likely debut with the Cosmos hardware later this year as part of the Vive Reality System.

VR probably isn’t going to break into the mainstream this year — it’s just not ready for prime-time yet. That’s not exactly a bad thing: the modern VR era only began in 2016. It took more than two decades for console developers to progress from the Atari 2600 to the Sony PlayStation 2.

James Halladay’s vision isn’t here yet, but at least HTC seems to be heading in the right direction. 2019 is shaping up to be a good year for early adopters.