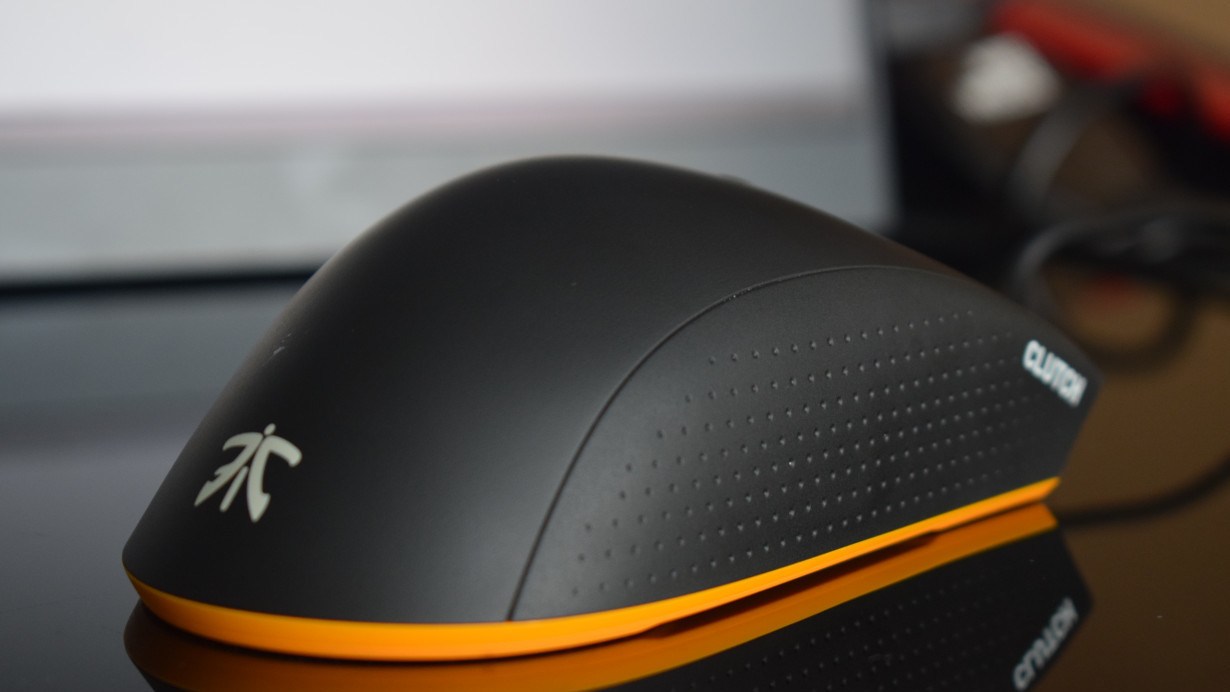 As vertical mice are beginning to reach a zenith, there’s still a place for more traditional-looking offerings. This week we’re taking a look at Fnatic’s Clutch 2 – a right-handed wired gaming mouse that’s an unabashed all-rounder, yet is sufficiently customizable for even the most competitive of gamers.

The first thing that strikes you about the Clutch 2 is that it’s supremely comfortable to hold. Unlike other gaming mice I’ve previously tried – like the Alienware AW958 – it’s not too big, and its gentle contours grip the hand nicely. Its myriad of buttons are easily reachable, meaning you don’t have to do any weird contortions.

The Clutch 2 uses Omron D2FC-F-7N mechanical switches for its buttons, which are extremely responsive and offer a satisfying “click” when pressed, but don’t require too much attenuation to activate. This makes it a decent choice when playing frantic FPS deathmatches, where every shot counts, and the line between victory and defeat is wafer-thin.

Underneath you’ll find a Pixart 3360 sensor. This supports a resolution of up to 12,000 CPI (Counts Per Inch), although the default settings on the Clutch 2 give it a CPI of 400. This is ideal for everyday tasks, and jobs that require the utmost precision, but admittedly a bit sluggish. If you’re gaming online, you’ll want to crank that number up dramatically.

Fortunately, this is easy to do with the free Fnatic OP app, which is available to download online, and allows you to customize almost everything to do with your mouse. You can, of course, adjust the CPI to your preferred level. Mine is set to 800 CPI, which I feel is an all-around happy medium.

But the customizations don’t just stop there. The app also lets you adjust the polling rate (the speed at which it communicates with the computer), as well as tweak the lift off distance, which is the elevation at which the mouse stops sending signals to the computer.

Users can also activate angle snapping, which is detrimental for gamers, but if you’re doing stuff that requires a certain level of finesse (like, for example, editing pictures with Photoshop) it can be handy.

As you’d expect from a product aimed at the gamer community, the Fnatic Clutch 2 comes with all sorts of LEDs baked in, which you can tweak through the Fnatic OP app. I must say, unlike most gaming hardware that crosses our desk, this is pretty tasteful stuff. The LED elements are delightfully understated, and offer gentle lighting effects that aren’t too distracting.

The app also lets you adjust the behavior of the mouse’s five buttons and single scroll wheel to perform custom tasks, like invoke keyboard macros with a single click. These macros can be created within the Fnatic OP app. You can also configure your mouse’s buttons to launch applications and open files or web links.

The Fnatic Clutch 2 is a great mouse. Ergonomically speaking, it’s extremely comfortable. I’m a big fan of the ease in which it can be customized to the needs of the user, as well as the gorgeously clicky mouse switches. In my opinion, it ranks up there with the likes of the Logitech MX Master II – which is probably my favorite mouse.

At the time of writing, the Fnatic Clutch 2 is available on Amazon UK for £50. In the States, it retails on Amazon for $60. And if you’re looking to get a complete keyboard-and-mouse set, take a look at our review of the Clutch 2’s companion, the Fnatic miniStreak, which is an excellent gaming keyboard.