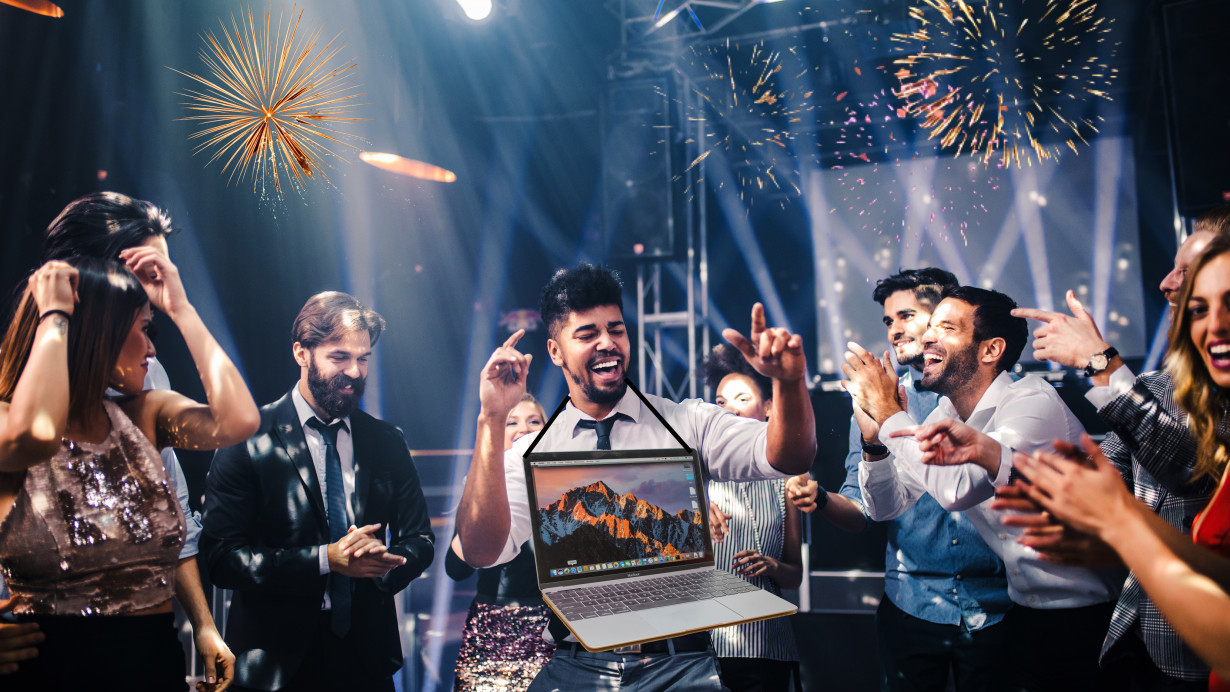 Being an adult is hard and having responsibilities is harder. I mean, who hasn’t begrudgingly gone out for a single, but ended up spending the majority of the night out, sleeping in a bathtub, and forgetting they had to throw an office party the next day? Not I, friend, not I.

So, you’re in this mess now. You’ve got a whole party to plan, but your brain is shriveled and you can’t leave the office. Don’t worry, it’s okay. We’ve got you.

Just follow the instructions below and you’ll be throwing a raging office party using only your Mac laptop and some common supplies.

Get yourself some music

First thing you’re gonna need is music.  I have one word for you: Spotify.

You’re too busy to work out what to play, so let an algorithm decide. As you will soon be rocking some trippy visuals, a strong light show, and a smoke machine, you don’t want to push out the boat here. So, head into the music platform and search for something like “party classics,” or “best Christmas tracks,” or “overplayed music that makes you want to smash your face into a wall until you lose all feeling.”

Your colleagues will love it.

As good as your laptop is, it probably won’t be loud enough to really blast the music to get people dancing. And where are you gonna get a speaker at this hour? Yeah, no chance.

This sound booster for Mac (also available for Windows) will be a lifesaver when it comes to getting the party going. The app provides immersive 3D surround sound, whether you listen using your laptop speakers or via headphones.

You can increase the volume of your Mac’s speakers so they can handle a group setting. Plus, it allows the user a huge amount of control over EQ, ensuring that the crappy club music you’re forced to blare out actually sounds okay.

Next step: set up a bangin’ light show. I mean, how else are people meant to know it’s time to party? And because you don’t have access to a proper rig, it’s time to improvise. So, head into your kitchen at work and grab some tinfoil. Then you need to get yourself some tape. And tape the tinfoil to the back of your laptop. Like this:

Then you need to head onto your phone’s app store and download a strobe app for your device. Position the light so it’s facing the rear of your laptop and, before you know it, you’ve got your very own light show:

This looks a lot more impressive in real life. I promise.

Make the party pop with some intense visuals

It’s pretty common in clubs to have projections on the walls, it adds atmosphere and a sense of class. Often these are classic movies or trippy patterns, but we can do better.

Well, kinda. There’s no way you’re going to get a projector on such short notice, so we’ll have to play something on the laptop.

Yeah, if you’re throwing a Christmas party you could put on a selection of seasonal movie clips, but that’s boring. No one’s going to remember that office party.

Instead, you need to go left-field and play some attention-grabbing. Our recommendation? La Planète sauvage (AKA Fantastic Planet), an experimental, surreal and pretty bleak French animated movie from 1973.

Trust us, the party will kick up a notch when they see this bizarre spectacle played to them. What’s an office party if it doesn’t get weird?

Let me ask you a question: have you ever been to a good party that didn’t have a smoke machine? I didn’t think so.

But where’s your hungover mind going to source a fully working smoke machine from? Shh, don’t worry – we’ve got you. Close your eyes and have a think. Who in your office vapes? Someone will. Picture that person. Then approach that person and ask for their help. And their vape.

Make them sit next to your computer and rip some of the tonkest clouds of smoke ever. Check it:

This flawless plan will give your party its very own smoke machine. And someone nicotine poisoning, but we can’t win all the time, right?

So say hello to your one-stop party kit

Yeah, that’s the stuff. Good luck with your office party and stay strong.

This post is brought to you by Boom3D. Want to learn more about Boom3D? Check out their video here: