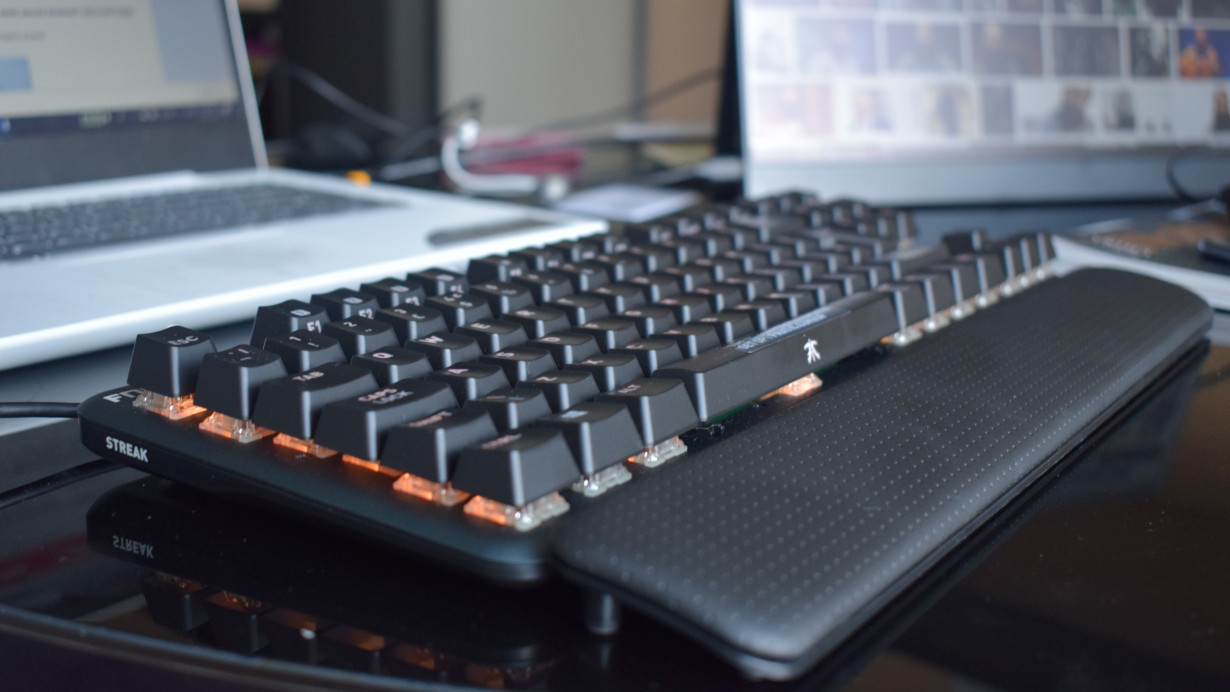 Gamers and writers are alike in one important respect: they’re both extremely discerning about the keyboards they use. As someone who sits in the middle of that particular venn diagram, I was thrilled when Fnatic offered me the chance to review their miniSTREAK compact gaming keyboard.

The Fnatic miniSTREAK is ideal for gamers who want an authentic mechanical keyboard experience, yet lack the desktop real-estate for something bigger, like Alienware’s chunky AW768 Pro Gaming Keyboard. It comes with a gorgeous RBG backlit system, which is customizable through an optional downloadable app.

Punters also get a choice between red, blue, and brown Cherry MX keyswitches. For this review, we looked at the Cherry MX Brown variant.

There’s an unfortunate tendency for gaming hardware to be – in a word – hideous. Beauty is in the eye of the beholder, of course, but far too many gaming products look like the unholy lovechild of a PCB board and a can of Monster energy drink.

The Fnatic miniSTREAK bucks that trend. In fact, if you leave the RGB backlighting turned off, you can barely notice that it’s aimed at a gamer audience. This means that it’s appropriate for more conservative environments, like a shared office, where more elaborate keyboards look distinctly amiss.

Speaking of RGB backlighting, you get a lot of leeway to play around here.  It supports eight different lighting modes (with self-explanatory names like ‘pulse,’ ‘wave,’ ‘ripple,’ and ‘rain’) and 16.8 million color options. To play around with this, you need to install OP – an optional downloadable package that lets you configure almost everything about the keyboard.

At the rear of the keyboard is a magnetic signature plate, which displays the Fnatic logo. Further down the line, customers will be able to create their own signature plates, allowing them to customize their keyboards. While this isn’t something I can imagine myself doing, I imagine those who game competitively will relish the opportunity to enhance their equipment with their own personal branding.

Underneath the keyboard are four rubber strips which keep the keyboard fixed in place. These are really grippy and ensure the keyboard doesn’t slide around during the most frantic moments of playtime. I’m currently writing this review on a glass table, and the Fnatic miniSTREAK has stayed put the entire time.

Users can also control the elevation of the keyboard thanks to its rubberized kickstand. This feels sturdy, but it’s a shame you can’t control the specific height and angle of the keyboard, as you can with other specialist models, like the Ergodox EZ.

The Fnatic MiniSTREAK connects to your computer over a removable USB-C cable. I’m a big fan of this, as it means that if the cable breaks (which is easily done if you’re regularly carting your hardware to tournaments), it’s not game over.

It also comes with a soft, leather wrist rest. This is removable and can be adjusted to three different levels. As an added bonus, it’s also really easy to detach and clean.

At the top of the keyboard, you’ll find four buttons beyond the usual QWERTY fare. One activates the function keys, allowing you to adjust key brightness, as well as control audio playback. Another mutes your microphone. Another mutes your computer’s audio. The last button is dubbed ‘Competition Mode,’ and turns off your keyboard’s RGB backlighting effects.

And then we get to the keyboard itself. I must admit, the Fnatic miniSTREAK is a lovely little model. The keys are compact, without being squished together. Spacing is one area that Fnatic has got perfectly right.

Each key has a consistent feel, while the PCB keycaps are nice and rounded, allowing you to easily grasp them.

As mentioned, the Fnatic miniSTREAK comes with several keyswitch options. The company decided to go with Cherry’s iconic switches, rather than the (also very good) Gateron clones, or a random Chinese knock-off, which can be somewhat hit-and-miss.

Each keyswitch has inherently different characteristics. Cherry MX Blue switches, for example, are both tactile and clicky, which makes them ideally suited to those who do a lot of typing, like programmers and writers. Cherry MX Red keys, on the other hand, are linear, which are lighter and require less compression force for a press to register. This makes them an ideal choice for competitive gamers.

Finally, Cherry MX Brown keys are a happy medium between the two. They’re tactile, but nowhere near as clicky as the notoriously loud Cherry MX Blues.

In my experience, Cherry MX Brown keys offer the best of both worlds for gamers and writers alike, and are a decent all-rounder. Keys require a bit of actuation to register, but it’s nowhere near as onerous as you’d expect with a Cherry MX Blue keyboard. Crucially, they allowed us to evaluate the merits of this keyboard from both gaming and writing perspectives.

In both scenarios, it stood up to the competition — and then some. When writing longer-form articles, like features and reviews, I didn’t feel as fatigued as I would have if I used my laptop’s built-in keyboard. As someone who writes for a living, this is a huge plus.

I was similarly impressed with its gaming credentials. I felt that the well-designed spacing of the keys, combined with the ergonomics of the adjustable wrist rest, lent favorably to long FPS sessions. I was simultaneously more precise and more comfortable.

Who is the Fnatic miniSTREAK for?

The Fnatic miniSTREAK is a fabulous little keyboard. It checks almost all the boxes you’re likely to care about. It’s stylish, comfortable, and hardy.

While it’s a perfectly good keyboard, you’ll find it’s the small details that make the Fnatic miniSTREAK special. From the wrist-rest to the rubberized feet, this is an intelligently-designed piece of kit.

If you’re a gamer, this is worth giving a shot. If you’re not a gamer, but want a decent keyboard to write or code with, it’s still worth examining, courtesy of its comfortable design and delightful ergonomics.

You can grab the Fnatic miniSTREAK from Amazon UK for £90 (Brown and Silent Red variants). On Amazon US, the Cherry MX Red variant retails for $100. Unfortunately, at the time of writing, no other variants are available via Amazon, but a broader range can be found via the official Fnatic website.