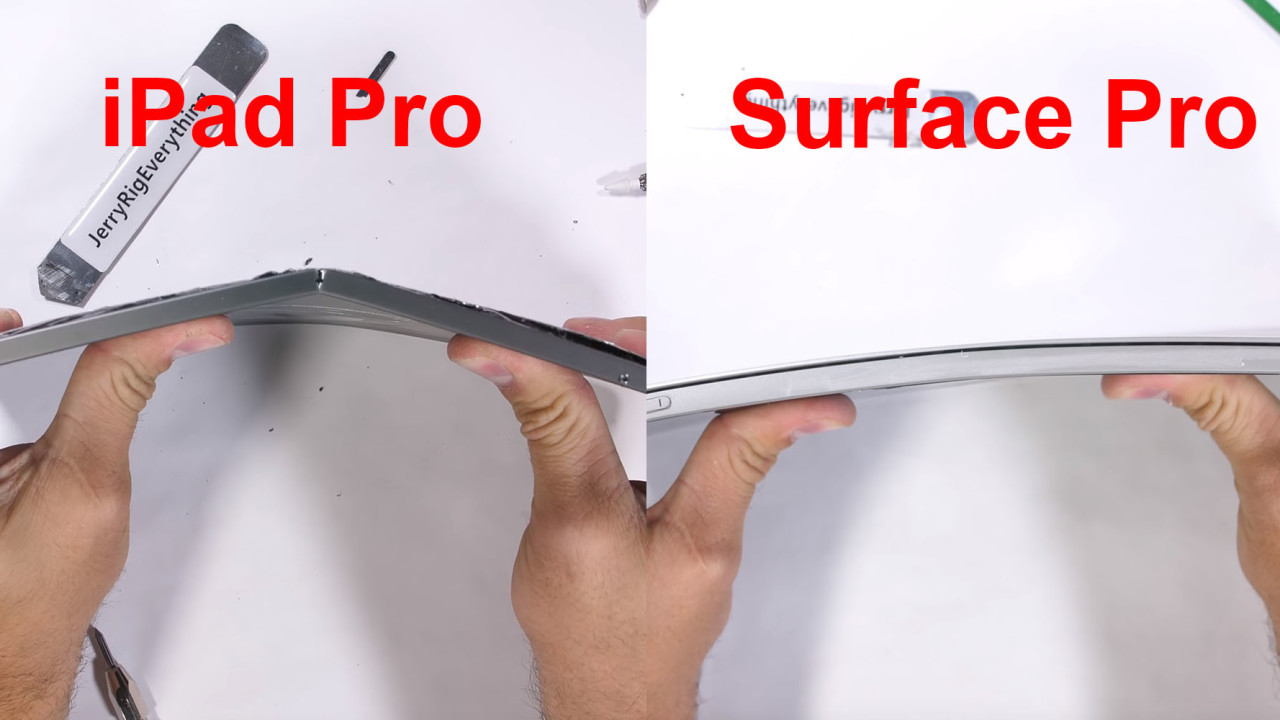 If you follow tech YouTube channels, you’ve probably heard of JerryRigEverything. A buff bald dude called Zach Nelson puts devices to the (admittedly unscientific) test by scratching their glass, setting fire to the displays, and – the most popular bit – trying to bend them in his bare hands.

The problem wasn’t that the iPad pro bent. Older iPads bent, other tablets bend. It was how easily it seemed to fail.

The question is how likely you are to suffer from a bent iPad in the real world. To this point, some commenters called foul. You should be taking care of your $800+ tablet. A large and thin 11-inch tablet is more prone to bending than JerryRigEverything’s usual victims, phones. Perhaps most importantly, and despite dozens of videos spanning several years, Zach hadn’t tested an iPad before, or even anything with so large a screen.

So today, he uploaded a video where he put Microsoft’s Surface Pro 6 to the same test. It survived. Mostly.

While it’s worrisome the screen cracked during the scratch test – arguably a bigger concern than a bend test – and there was a fair bit of flexing, the Surface Pro managed to survive the bend test. It is a bit thicker than the iPad Pro, but the larger surface area mitigates that benefit. It’s likely the chunky kickstand contributes significantly to the overall structural integrity.

Look, we realize none of this is particularly scientific and that these are different devices with different use cases. And Surface aside, other tablets bend too.
Still, a quick search shows there have been several reports of bent iPad Pros throughout the interwebs – sometimes straight out of the box.

Enjoyed opening my iPad Pro to find it was bent straight out the box. #ipad #ipadpro pic.twitter.com/J96opEqalT

My new iPad pro came out bent right out of the box. I am sure mine was a not so common defective unit but you should definitely check for any issue since lots of people are complaining about bent iPad pro. #iPadPro #bent #bend pic.twitter.com/pCgKhT4w1v

Well i got mine bent out of the box, since i didn't got apple care, I'm stuck with a bent ipad pro that cost more than 1k$ great

@tailosivetech in response to your latest video, my iPad has bent from normal use over the course of just a couple of days. This is my SECOND iPad Pro 2018 to bend on me. I had to exchange my first one in because it was bent right out of the box. pic.twitter.com/4mrHgNynpq

I certainly don’t think the tablet is going to snap in half with everyday use, and it’s possible JerryRigEverything’s popularity – and the darn press – amplified a minor issue. But for a device that you’ll use for years and stuff into a bag or backpack regularly, it does raise concerns about deformations developing over time. Fundamentally, I don’t think shaving off a millimeter or two is worth that risk, especially when it seems other tablets can survive similar strain.

We’ll have to wait and see how this pans out – or for more bend tests to show up. But whether or not you think the new iPad Pro’s pliability is a real issue, highlighting structural weaknesses can have a positive impact. After the iPhone 6 fiasco, Apple tweaked the iPhone 6S so it wouldn’t suffer from the same problem – even though its chassis was outwardly nearly identical. And I think we can all agree a stronger device is a better one.

For now, maybe just take a little extra care with your fancy tablet.