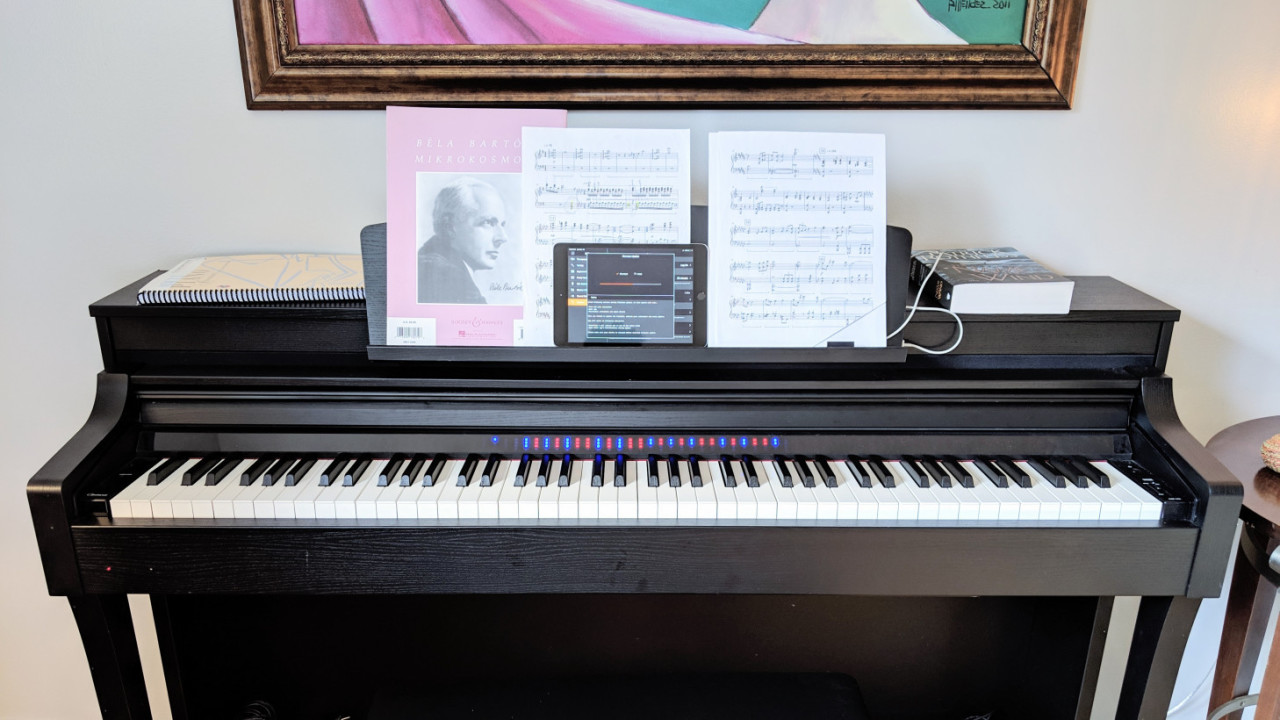 Yamaha is a giant of many industries, but it’s best known for its massive portfolio of instruments – pianos in particular. For over a century, it’s made everything from concert pianos, to classy uprights, to cheap plastic keyboards for beginners.

Along with its cheaper sibling, the $3,500 CSP-150, it borrows elements from all over the company’s piano family. It uses sound samples from Yamaha’s flagship CFX and Bosendorfer Imperial concert pianos and comes in an attractive upright body. It’s real claim to fame, however, is its ability to teach you songs using LED lights like one of those cheap plastic keyboards. Even cooler, it’s not just built in songs either – it can analyze songs in your library and create basic sheet music for it through the magic of technology.

You don’t often see those kinds of smarts on a piano of this form factor. After all, console pianos are a piece of furniture as well, even when they are digital. All those lights and buttons and doodads aren’t very attractive on what should be a classy centerpiece.

Yamaha gets around this with a few clever tricks. For one, the l lights are hidden behind a black strip above the keys, which is completely inconspicuous when the lights are off. Second, there are only three control points on the unit: a function button, a volume slider, and a power button. Everything else is controlled via an intuitive Android and iOS app.

Before we delve deeper into the smarts, it’s important to note the CSP-170 is a solid digital upright even without any of techy features.

It uses Yamaha’s ‘Natural Wood X’ keyboard action, which the best Yamaha has to offer outside of its pianos with real acoustic actions (the CSP-150 features a very similar action, except the keys are all plastic and no wood).

It’s not my favorite keyboard action in the price range – I prefer those on Roland and Kawaii’s pianos – but that’s subjective, and it’s still one that feels far more realistic than what you usually get on a digital piano. A longer pivot length than most digitals means you can play further back into the keys with less fatigue, and the keys handle quick repetitions better than some real uprights.

Browse around piano forums and you’ll see thousands of messages debating piano actions. You can learn on any decent weighted action, but a good digital action will help you better transition to the real thing. Often, the only reason people upgrade their digital pianos is for an improved action, as you can always buy a better sound engine by hooking up a PC, but you’re stuck with the action you’ve got.

Yamaha’s sound system is impressive on paper. There are four speakers positioned strategically for a more enveloping sound. Yamaha pumps 180 watts into those speakers, allowing the CSP to get much louder than you’d need in any normal home – and many venues. Importantly, they also reach far down into the sub-bass, providing a tactility to the lowest octave you rarely get on digital pianos. When I used the CSP-170 as a giant speaker for my smart device, it easily filled up the whole home.

(Here too the CSP-150 differs, only offering two speakers and 60 watts of power.)

This is all fine and dandy, but the first time I played it, I was only impressed with the sound output, not the piano tone itself. Yamaha is known for its relatively bright and clear piano tone, yet the primary two piano voices both sounded so warm to as to be almost muddy. It might’ve just been my room acoustics – it was less pronounced when using headphones – but I expected better given this is Yamaha’s flagship sound engine.

Thankfully, there’s that app I mentioned.

Plugging in an iPad mini running Yamaha’s Smart Pianist app opened up a wealth of options and controls that were far more intuitive and comfortable to use than the usual tiny display and controls on most keyboards.

The first thing I did was check if I could make the sound a bit brighter. Lo and behold, there’s a ‘brightness’ option in the sound settings portion of the app. Dragging the brightness slider up and turning down the default reverb – artificial reverb on top of your room’s own acoustics can further muddy things up – made the tone oodles clearer, and far closer to the Yamaha studio grand I practice on during my lessons. I usually practice with a piano sound engine on my PC with my own keyboard, but I felt no need once I’d tweaked the 170’s sound to my liking.

And there are a lot of tweaks, including various mechanical noises, sympathetic resonance, a binaural recording setting for headphones, and the ‘openness’ of the lid. You can even change the tuning and volume of every individual note, should you be looking for a particular sound. None of these options are particularly unique among the competition, but Yamaha’s interface is the most intuitive I’ve seen.

But the heart of the CSP-170 is in the music learning features. Unlike some other pianos with guide lights, the CSP-170 use waterfall-style “stream lights” that help you time when you need to hit the notes, not just see which notes are next. As I wrote when I reviewed the similarly luminous One Smart Keyboard Pro, I think these features are no replacement for traditional sheet music – but they can be a useful aid to motivate younger learners and total beginners, or help with speed up rote repetition for those further along.

The app itself doesn’t display any Synthesia-style falling notes and defaults to the sheet music. There’s a solid selection of built-in pieces – including practice items from common lesson books – and you can download more from the internet.

My only real problem with the stream lights is with their colors. Red is for white keys, blue is for black keys. It’s somewhat redundant, as the lights already have different shapes matching that of the keys.

I would’ve much preferred each color represent your left or right hand. Sometimes when following along with the built-in music, I wouldn’t know which hand to use for the next note, especially if the melody jumped around a lot. Still, it’s a handy feature to have, and one that’s completely optional.

I’m more enamored with the CSP-170’s ability to analyze music in your library and create chord progressions for it. Though it can’t pick out the melody lines yet, it works surprisingly well with the popular tunes I tried – pretty much anything that wasn’t too harmonically complex. You can view the chords as either sheet music or as a list of chords – great for any guitar players following along. You can even bring in singers, thanks to a microphone port as well.

That said, keep in mind it only works with music you have actually purchased – streaming titles won’t work.

You can get similar tools on a PC, mind you, but it’s awesome to have it integrated so intuitively right on your piano. Again, I’m a stickler for learning with books and a teacher, but easy access to chord progressions, coupled with the intuition of the learning lights, helped me jam along to new pieces faster than I expected.

If you’ve read this far along, you’ve probably already decided whether you think paying upwards of four grand for a digital piano is even worth considering. If you don’t care that much about more powerful speakers and the wooden action – really, they feel very similar – then you should opt for the cheaper CSP-150. It’s what I’d recommend to most buyers, as you can always augment sound with your own speakers down the road.

Likewise, if you don’t care about the lights and or/don’t mind a less realistic keyboard action, you can opt for any of the other recent Yamaha instruments compatible with the Smart Pianist app, such as the $599 P-125 slab or YDP-S34 console. You’ll still get the same music analysis and sound tuning features.

But with the CSP-170, you’re paying for a uniquely versatile combination of features: the classic design, the feel of the action, the impressive sound output, and the useful learning features in one package. Sometimes it’s simply more efficient – and fun –  to have everything you need in one package and just start making music.

If you have the dough to spend, the CSP-170 is a worthwhile addition to a home with a novice pianist of any age.