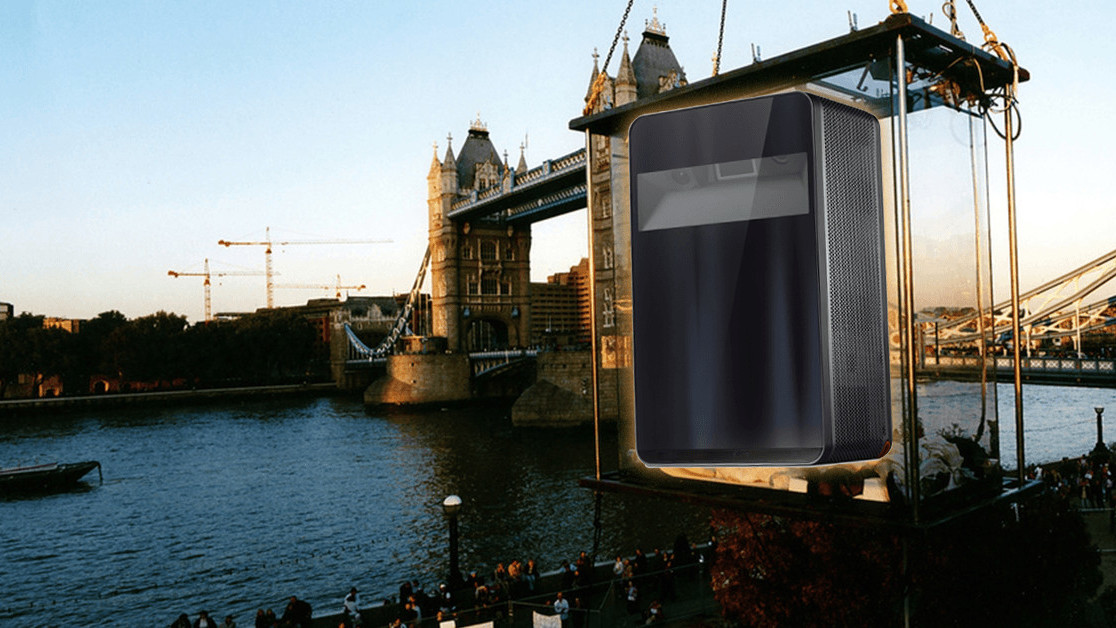 Technology fucking rocks. Just when I think I’m numb to new things, along comes the Puppy Cube and blows my mind.

Basically, it’s a cuboid-shaped projector. Yep, despite the name, it’s not actually a cube. Still, rather than just being a normal projector, the Puppy Cube has some tricks up its sleeve. It runs an Android OS and – here’s the magical part – when it’s stood up, the surface it shines light onto becomes a touchscreen.

Then when you lie it down on its back, it functions like a normal projector. And, even better, it’s battery powered – meaning you can use it anywhere. This video does a good job of summing the Puppy Cube up:

Right? To be honest, when I was first offered to review it, I expected it to be a piece of shit. In my experience, ambitious hardware from companies you’ve never heard of tends to be bug-filled and barely useable. And while the Puppy Cube isn’t perfect, it’s surprisingly good.

First off, it works. When it projects onto a surface, you can actually use it like a normal touchscreen. No, it’s not as responsive as a smartphone and you’re not going to be writing your novel on it, but it’s still pretty slick.

The light level of the Puppy Cube was better than I thought it’d be too. I assumed that the projection would get washed out in bright light, but it handled these environments decently. Of course, the picture quality is nowhere near as precise as a screen, but that’s true of most vaguely affordable projectors, so it’s hard to be too critical.

I also found that the battery life was solid, with it lasting a couple of hours of use. Basically, it lasted long enough to watch a movie with.

Talk to me about aesthetics, son.

Yeah, it’s not breathtaking, but it’s pretty in a functional sort of way.

Cool – you mentioned it works as a normal projector too?

Yep. When you lay the Puppy Cube on its back it switches modes and projects onto a wall (and therefore a larger space). You have to use a remote to control the device when it does this, as the touchscreen functionality doesn’t work with the bigger visuals. Quality-wise, it projects at 720p, which isn’t amazing, but neither is it bad.

Switching between these modes was also impressive. When you move the device, it whirs before projecting, and automatically focusing the picture. Easy.

There are also a set of 5W speakers on the Puppy Cube which delivered a richer sound than I thought they would. No, they won’t become your primary listening device, but they do a job.

What about the negatives?

Well, there are a few. First off, the Google Play app store isn’t on the Puppy Cube. Instead it uses the UpToDown store. This seems reputable enough and has most of the big hitting apps on, but I would’ve much rather had Google Play if I’m honest.

Also, while the touch screen works the majority of the time, there are still glitches and moments where it doesn’t quite work. This is especially true if you’re typing out something long.

The price and its long-term use.

It’s currently raising funds on Indiegogo and has an early-bird price of $799. This will rise to $1,499 once it’s out properly. Both of these figures are pretty, pretty high.

This price range would be acceptable if there was a killer use for it. For example, I’d have no problems shelling out for a laptop between $800 and $1500, because that device fills a particular need in my life.

The Puppy Cube though? I couldn’t find a single killer use for it. It’s not precise enough to replace a tablet or your TV. It’s in the middle ground. And while it’s badass, it’s still a novelty. And $799 for a novelty is a lot of money.

I can see situations that the Puppy Cube would be amazing in – at parties, in the kitchen, or on a trip – but I’m not sure that I’d to splash out the cash for it.

So who’s this for?

Anyone who loves gadgets and has money to burn.

Look, the Puppy Cube is one of the coolest devices I’ve played with. It’s new, interesting, and exciting. Despite a few rough edges, it works far better than I thought it would. It feels a bit like magic.

But no matter how much I like it, I just can’t see where it’d slot into my everyday life. If you can, then god bless.

Head over here if you want to back the Puppy Cube, but remember that you do so at your own risk. No matter how good crowdfunding looks, it can always fail.

Stay up to date on the latest gadgets, follow TNW on Flipboard.