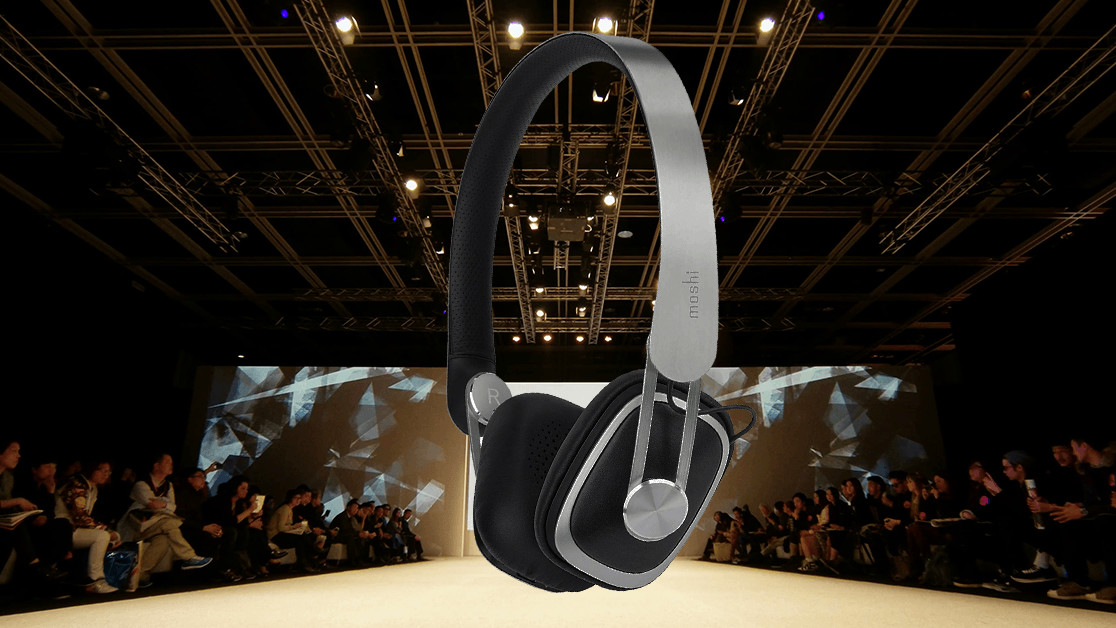 The premium headphone market is crowded. There are not only boatlands of brands battling for your earholes, but some very established companies (think Sennheiser, Sony or Bose) who suck up a lot of market share.

Well, one of the latest companies to enter the ring is Moshi. It’s hoping that its Avanti Air on-ear, wireless headphones will earn it a foothold in the space.

Yep. The company made its name with phone cases and battery packs. Business shifting from accessories to headphones isn’t new (like Anker), but these tend to be on the budget end.

Moshi’s Avanti Air headphones – which retail for $300 – are aiming a bit higher.

Pretty great. They straddle the line between retro and modern, with clean, sleek lines combined with lots of brushed metal. They also won a Red Dot Design Award, which isn’t too shabby of an accolade.

While the headphones are a decent size, I’m a fan of how easily they fit in a small (and tough) case – making them very transportable.

Moshi also did a good job in designing the buttons on the headphones.

They’re subtle, easy to press while wearing the headphones, and, more importantly, just worked. It might sound like a basic thing to praise, but you’d be amazed at how much audio gear messes this up.

How comfortable are the Avanti Air?

First off, I’m not a fan of on-ear headphones. I find over-ear models both more comfortable and better at delivering sound. Still, you’ve got to judge what’s in front of you and the Avanti Air were… okay.

The leatherette ear cups are soft, but I found wearing the headphones for more than a few hours awkward, as they squeezed my head too much. To be fair though, this might be because I have a big head.

Another element of the Avanti Air I found irritating was the adjustable slide on the headband. Getting them to stay on my skull was tough and there was no consistency in their hold. One side was slippery, while the other was almost frozen shut.

After a bit of tinkering and fiddling, it was fine when I was sat down. As soon as I moved around though, Moshi’s Avanti Air would slip off my head – especially if I bent down to pick something up.

This isn’t an issue with this type of slide either. I’ve owned a pair of (over-ear) Sennheiser Momentum (which use a similar method) for about three years and I’ve never had this issue.

You said they were wireless, how does that work?

The Moshi headphones use the aptX bluetooth codec, arguably the best of the bunch. There were problems though.

When connected, the headphones hissed quietly. Sometimes this sound would disappear, but often it was there in the background. Which isn’t good.

I also took issue with the bluetooth connectivity. While the headphones would work at a good distance, switching between different devices (such as a phone or computer) was far more irritating. I ended up having to power the Avanti Air on and off regularly to connect to my desired device.

There’s also no headphone jack on the Avanti Air. Is this surprising? No, not really. I do always appreciate it when a company gives me an option to use a cable though. Wired listening still delivers the best sound, I’m still in love with my iPod, and I don’t think including a headphone jack is that much work. Still, this is hardly a deal breaker.

If I had to sum them up quickly, it’d be solid, but not good enough for the price.

This isn’t to say they suck, far from it. You can get some good sound from the Avanti Air. Let’s take a look at Roy Orbison’s classic ‘Love Hurts.’

In my experience, the headphones handled this sort of soft and fiddly music best. Folk and acoustic tracks in particular clear and precise.

The Avanti Air didn’t hold up so well for their price outside of this type of genre. Take Lil Peep’s ‘Cry Alone’ as an example.

The late-singer’s track has a nursery-rhyme style simplicity, but elevates itself from a dirge with its dynamic changes. The song shifts and twists, moving from a simple guitar line, adding hip-hop influenced drums, and then crashing crescendo.

The loud parts of the track should be a punch in the gut. The quieter parts vulnerable. Instead it’s pedestrian.

There’s a lack of meatiness and power to the way they handle music. There’s bass, but it lacks kick. Trebles don’t sparkle. Drums don’t have the guts that other headphones deliver.

It’s all a bit flat and lacking in precision.

Okay – so the Avanti Air are good for quiet music, but not so good for noisier stuff?

Basically, yeah. But in all honesty, they just don’t compete with other $300 range headphones sound-wise.

On a positive note, I was impressed with the battery life. The company states the Avanti Air last for 27 hours of listening and this was pretty accurate. There’s nothing more annoying than wireless headphones you have to charge constantly, so shout out Moshi.

So who are these for?

A style-conscious person who listens to a lot of gentle ambient, acoustic, or folk type of music.

While I enjoyed using the Avanti Air, I have a feeling that Moshi put a lot of focus on aesthetics and maybe didn’t pay enough attention to the sound.

Still, Moshi is definitely a company to keep an eye on. If they can fine tune the sound and iron out some design flaws, they might be onto a winner. In their current iteration though, they don’t quite live up to the price, which is a shame.