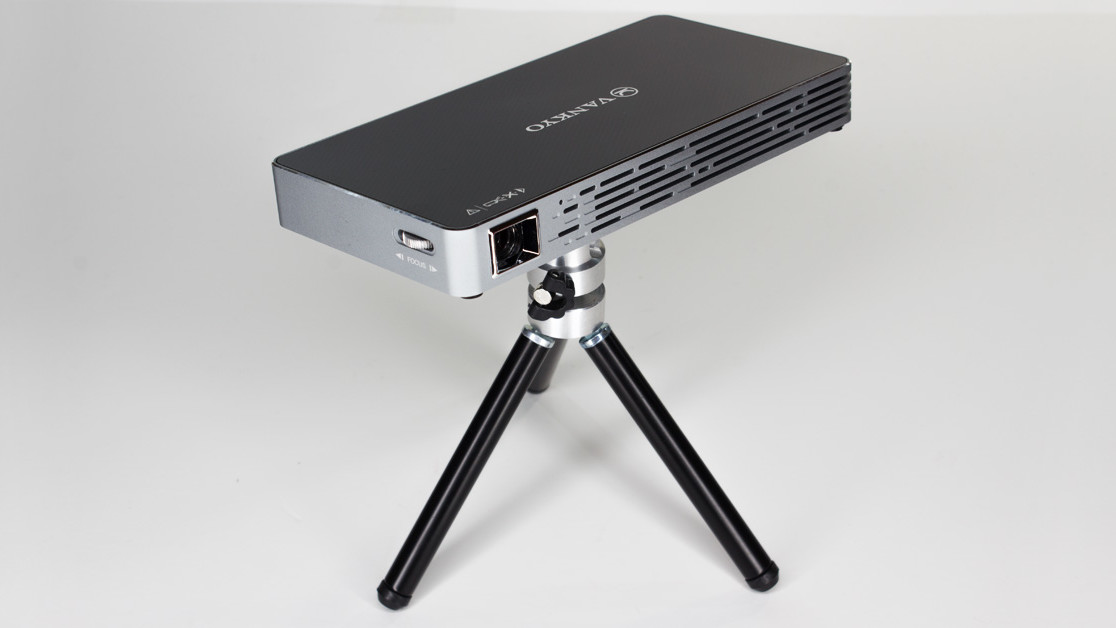 The Vankyo M50 Passport DLP mini-projector is an Android-powered gadget that can project onto just about any flat surface. It’s pocket-sized, so I smuggled a review unit home to see what it could do.

The M50 Passport is an immediately accessible gadget. It’s small – about the size of a passport, hence the name – and it runs on Android, which means most of us are familiar with its software already.

It’s also quite fetching, especially compared to regular projectors. Its larger colleagues look right at home on one of those rickety metal carts you remember from grade school, but the M50 seems like it should be spinning on some cool person’s finger. 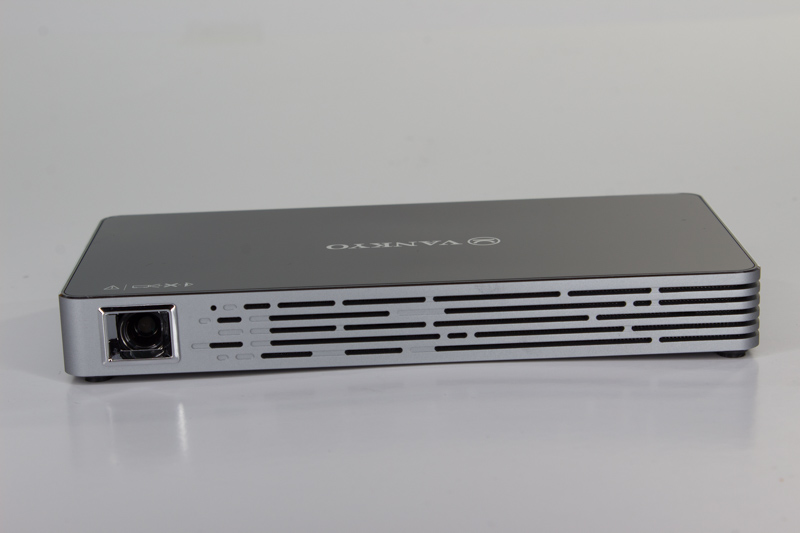 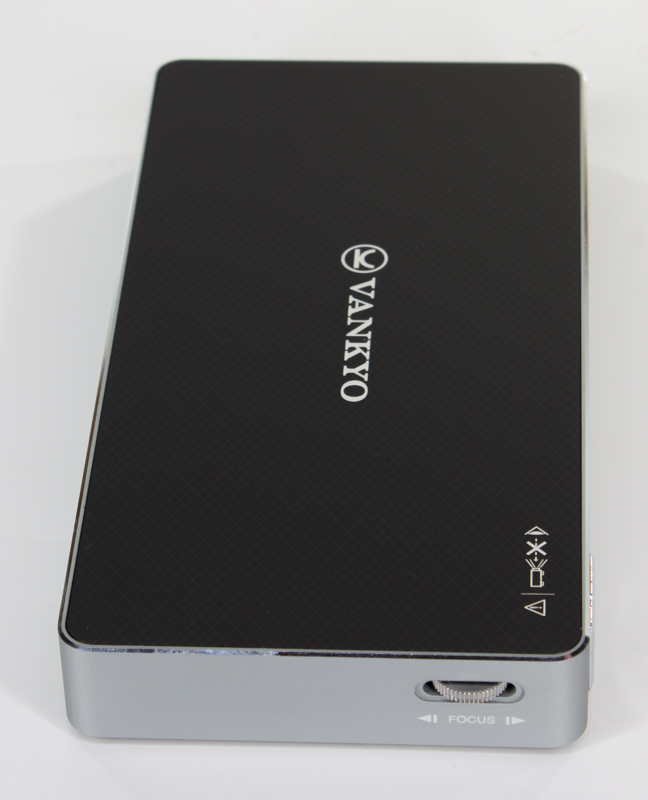 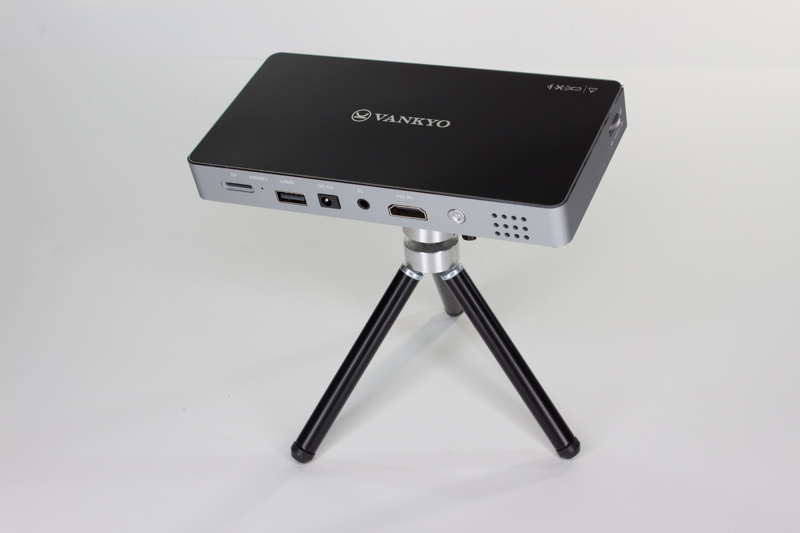 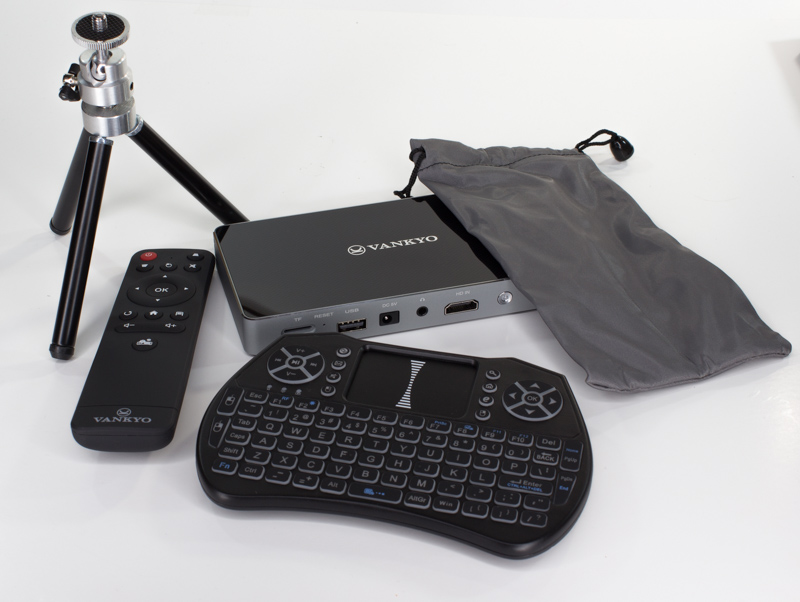 I wish it were any other color than black, but the shiny silver accents around the lens and frame do look pretty sharp. Besides, you’re supposed to look at the image, not the projector.

Before we get into performance, let’s take a look at some specs:

The device itself is pretty simple to use. It has a power button and a manual focus dial, but otherwise everything else – including setting the keystone shape and picture size – is done with a remote control.

Interestingly, it ships with two remote controls. One is a slim affair that reminds me of Amazon’s bare-bones remotes for its Fire TV sticks. With it, you can access all of the functions of the M50 – including surfing the web with Chrome by toggling mouse-mode on and off. It’s not elegant, but it does the job.

The second remote is as big as the M50 itself. It has a full QWERTY keyboard and a touchpad. I tested it with a couple Android phones, and my Windows 10 PC, and it worked with all of the devices via plug-and-play wireless connection through an included USB dongle.

It functions fine and made surfing the web with Chrome and logging into my Netflix and YouTube accounts much easier. But, it feels pretty cheap and I’m probably only going to use it for the projector.

The picture created by the M50 is bright and clear, and that’s the most important thing about it. A manual focus knob makes it easy to keep things from getting blurry even at maximum size, and there are numerous screen sizing options to make sure the picture fits wherever you want to project it.

I was impressed with how bright the image was. YouTube videos were clearly visible in broad daylight, even when projected against a dark surface. And, using this projector with a screen designed for the purpose resulted in an image that looked convincingly HD.

In fact, shining it on anything even remotely screen-like worked perfect. Here’s what it looks like projecting Netflix onto a piece of construction paper.

I believe I was fair and honest when I reviewed the 410. But I left out the fact that I don’t really have a lot of use for it personally. My walls are dark and I don’t really have the space for the screen. It’s definitely something I’d use, just not daily or even weekly.

The M50, on the other hand, I can see myself using quite often. I’ve only spent a week with it, but the fact that it doesn’t need to connect to an external video or power source makes all the difference.

I like that, since the M50 runs on Android, I can screen mirror my phone to it over Wifi. This makes it perfect for setting up impromptu slide shows with family and friends. It’s also great if you’ve got an app you want to show a group of co-workers, but you don’t want a bunch of people leaning over you to see your phone screen.

It also connects to a computer via HDMI, which makes it a quick and easy second screen for people who don’t actually have a second screen.

But, for me, the best thing about the M50 is that it doesn’t have to connect to anything. You can take it out of its bag, turn it on, and project a movie from Netflix, Hulu, YouTube, or Prime Video onto any semi-suitable surface.

You don’t even have to plug in any cables or cords if you don’t want to. Its internal speaker isn’t anything fancy, but you can hear it. And its internal battery lasts just long enough watch a whole movie (2 to 2.5 hours in my testing). My fiance and I have been using it to watch Tromaville movies on the ceiling while we relax after putting the baby to bed. It’s become a date night staple for us.

There are a few issues with the device. I wasn’t able to follow the included directions and use wired-USB screen-mirroring with my phones. When connecting my devices it’s supposed to prompt me to download something, and that never happened. I could, surely, install some other 3rd party software and get it working, but I wasn’t willing to go out of my way. Besides, the Wifi screen-mirroring works fine.

Basically, the instructions and documentation for this product are terrible. For example, the QWERTY remote comes with startup instructions and that’s it. There’s no description for using it with the M50, so you’re on your own when it comes to figuring out how to change the volume or keystone settings using it (if it’s even possible — I gave up and used the other remote).

These are minor quibbles though, because it’s really simple to turn the M50 on and start watching something. I never found myself in a position where I couldn’t get it to do what I wanted, though sometimes I found myself going about it the wrong way.

The bottom line is that this isn’t the projector you set up in your media room so you can have a 100-inch screen. You throw this in your back pack and pull it out wherever you feel like. It’s super-portable and easy enough to use that you won’t be fumbling around in front of your friends for five minutes setting it up just to show off a 30-second YouTube video.

I recommend this for people who want the convenience of a projector but don’t have room for a projection screen or big white walls.