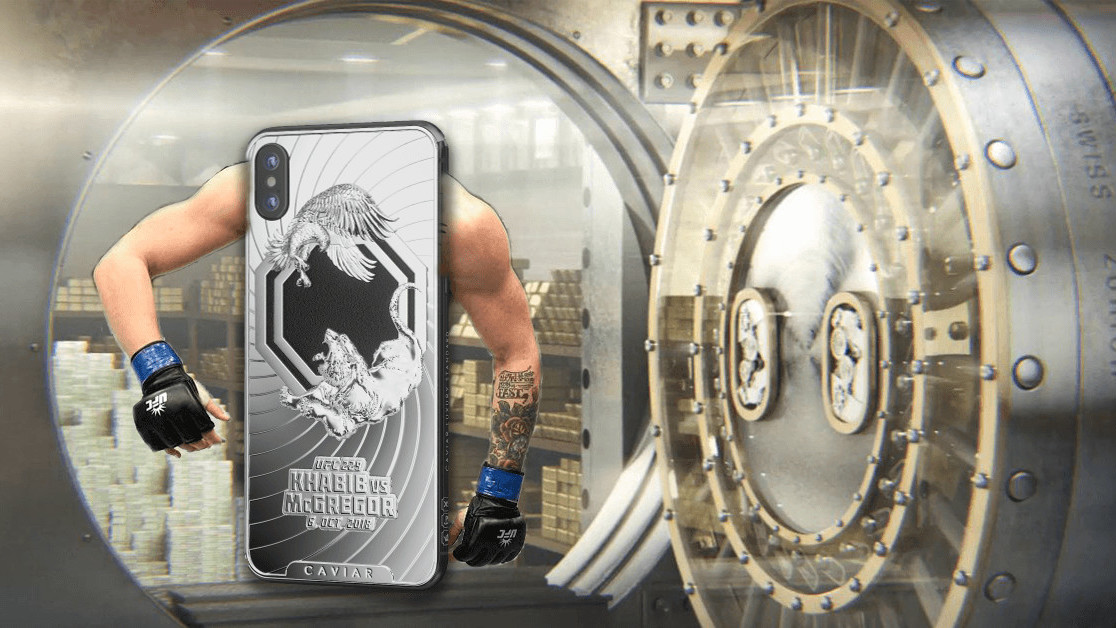 It makes me sad every time I pull my phone out of my pocket. Yeah, it’s a breathtaking piece of technology and example of human ingenuity, but I can’t look at it without thinking “why isn’t this advertising an MMA fight?”

I know you feel the same. I understand why you spent four fully-clothed hours, rocking back-and-forth in the shower. I get it. You needed one thing and one thing only: a $4,560 titanium-coated iPhone emblazoned with references to the Conor McGregor vs. Khabib Nurmagomedov UFC fight that took place over the weekend.

Well, dearest one, you’re in luck. Caviar’s Titans Of Force brand has released its Khabib vs. McGregor iPhone Xs/ Xs Max phone and, best of all, it can be yours.

Stare long and hard at into its shiny surface:

Let’s look at the phone’s main features and find out why.

This is the stuff. Right here, is where the stuff is.

There’s a lot of symbology on this phone. Powerful, absorbable symbology. And if you can absorb it? It’s worth money.

The soaring strings, the liberal use of words like “force” and “destroy”, the fire graphics – this promo has it all. It’s hard to put a monetary value on its importance (art elevates the soul and that’s priceless) but they say “fight” six separate times in like 97 seconds, so that’s worth at least six thousand dollars.

They say good fighting is all about deception. You force your opponent to expect one thing and then you attack in another. This is what I assume influenced Caviar when it said this about the ring on the back of the phone:

“The spectacular, clean-cut geometry reminding the lines of the boxing ring attracts eyes and doesn’t let it go…”

Interesting approach. The athletes are competing in MMA and I’m pretty sure that a boxing ring is square.

The lifestyle improvement you get from owning a box like this (+$98,000)

Advertising always comes true, just ask anyone who has ever bought perfume. That’s why this final image of the Caviar device is so alluring. Look at it.

Plus, that box looks like it’s worth some money too (+$1,000). Bless adverts for automatically changing the way we live.

How much is the Caviar fight-phone actually worth?

All the above features add an astonishing $114,000 of extra value. Considering Caviar are only charging you $3,560 on top of the normal price of the phone, you’d be stupid not to buy it.

So what are you waiting for? Go on, buy it. How else will you fill that aching void inside you?