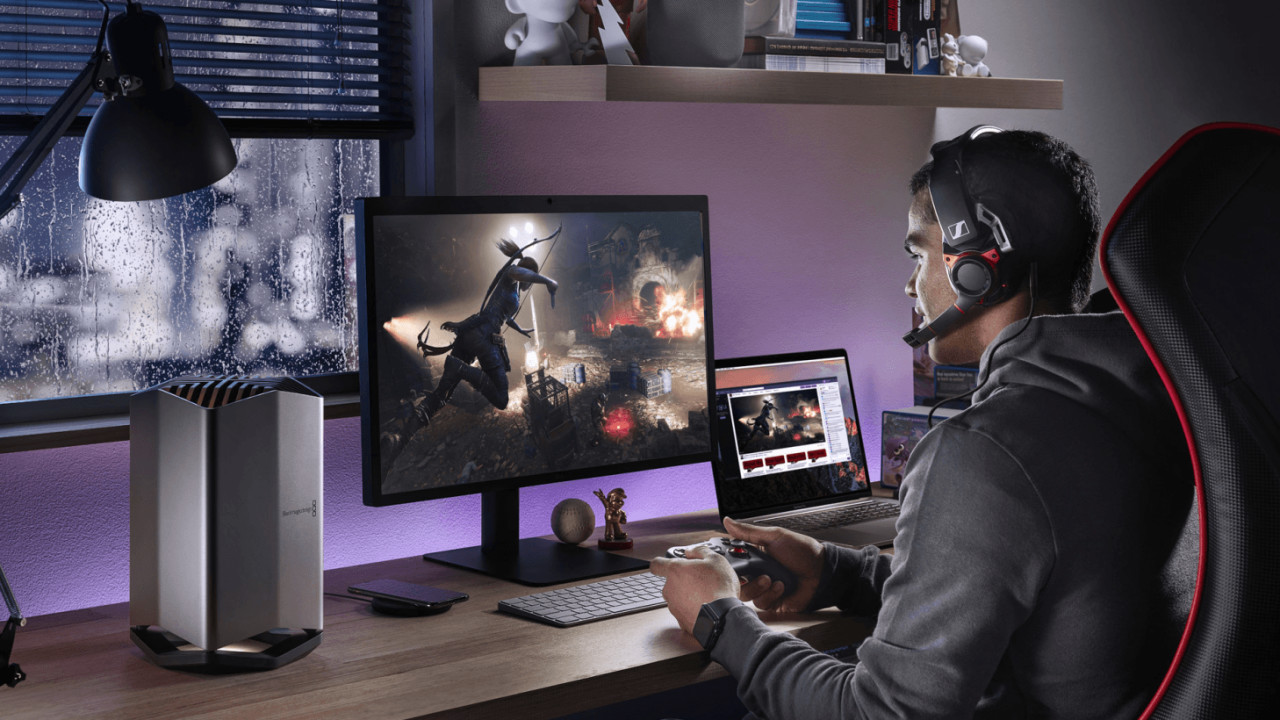 As an Apple fan, I rarely get the luxury of options. For Pro level users, those options are, currently: Buy the 5k iMac Pro, grab a 2018 MacBook Pro, or wait it out for the next Mac Pro and hope that your credit card balances can handle it.

If you’re like me, none of these are ideal. I like to tinker. I want to build a machine that serves my needs while not breaking the bank on things I don’t want or need.

Take the display of the iMac Pro. It’s beautiful; but I don’t want it. I’m willing to sacrifice some resolution to keep using the 34-inch Acer Predator ultra wide I’ve fallen in love with. Being an all-in-one, though, I don’t get that option. I’m going to pay for the screen whether I want to use it or not.

There’s the MacBook Pro. It’s newly upgraded, and a powerhouse in its own right. But it’s still a laptop. Even its beefier specs can’t hide the fact it’s rocking a laptop GPU that’s, well, a little on the weak side for gaming and video editing.

That leaves Apple fans in a place they often find themselves in, a compromise between what they want, and what’s available.

Enter Blackmagic. When Apple announced external GPU support at last year’s WWDC, my heart skipped a beat. When it rolled out the first of these eGPUs with Tim Cook’s stamp of approval this year, I was flat out floored.

There’s a lot to like about Blackmagic’s eGPU offering.

It’s the first of its kind to support Thunderbolt 3 and USB-C monitors, although these are still semi-rare. The only Thunderbolt 3 monitor that officially supports the eGPU, to date, is the LG 5K UltraFine Display. Which, for anyone that owns that monitor, is great. For everyone else, you’ll need to grab a display port adapter and hope for the best.

It certainly works on other monitors. It handled my Predator ultra wide, though not officially supported, just fine — using a DisplayPort adapter, of course.

Looks-wise, it’s about as good as it gets. Underneath you’ll find an intake fan that sucks air in, using it to cool the GPU inside before it vents out of the top. It’s a design similar, at least visually, to the Mac Pro trash can models everyone loves to hate.

It’s also whisper quiet. So quiet, in fact, I routinely found myself checking the GPU monitor to ensure it was on.

Inside there’s a non-upgradeable AMD Radeon Pro 580 GPU with 8GB of VRAM. Unlike the Razer Core and other comparable models, you can’t swap the graphics processor for a beefier card. This, for lack of a better word, is a bummer. It’s essentially a useless device after two to three years, as opposed to competitors that allow you to just swap in a better card.

Plug and play, though, was pretty much limited to my MacBook recognizing it existed. I had to Google some fairly complex configuration guidelines that didn’t come with the eGPU, nor were they mentioned by the company itself in our talks. It worked; I could see it was functioning by checking the GPU monitor and the little icon in the menu bar, it just didn’t seem to have much of an effect.

So I turned to Google. The problem, as best as I could gather, was that it wasn’t optimized to run on High Sierra, since that version of macOS prioritized the internal GPU and the dedicated 560 on my model of MacBook Pro. There was nothing to allow me to prioritize Blackmagic’s card.

Fair enough. I quickly booted into a beta version of Mojave (and later, the actual release version) and found that I could force apps to use my very expensive paperweight.

But it didn’t really matter. The eGPU, while supported, was optimized for almost none of the programs I use most often. On Final Cut, in a head-scratching turn of events, it was actually slower completing some processes than my MacBook Pro was without it plugged in. On Adobe Premiere Pro, and Photoshop, it led to zero gains, and sometimes crashed the app, requiring a restart.

After reaching out to both Apple and Blackmagic, I was given a sort of finger-pointy response that placed the blame on Adobe, and then Apple, for not offering better support for eGPUs.

There’s some truth to this statement. Support for eGPUs on Apple devices is lagging, and sometimes non-existent. While compatible in the sense that you can plug then in, Apple recognizes the device, and there’s some performance benefit, they’re hardly the devices Apple raved about on stage. It’s not a Blackmagic problem; the company seems to have nailed its end of the deal. This is a marketing problem. These simply aren’t ready for primetime, support-wise.

It’s a $700 device that, currently, doesn’t seem to offer much in the way of upside. I mean, I liked that I could plug my laptop into it, thus negating the impact of using a second USB-C port for power. I liked that the four USB 3.1 plugs provided a hub of sorts to plug in my mouse and keyboard for charging.

But for me, this, and most other eGPU models, are still just really expensive hubs. There’s not enough bang for the buck to warrant a recommendation — at least not yet.

Where I did see an obvious benefit was in gaming. Fortnite, for example, was nearly unplayable on even “medium” settings with just the MacBook Pro. The eGPU bumped the laggy 20-25 frames per second up to around 30-35 on Medium settings — which is still nowhere close to the 60-plus FPS most game developers aim for.

It was definitely playable though. When switching to High, it maintains its playability but adds a bit of lag. On Epic settings (the highest offered), it’s a laggy mess of dropped frames, blurred textures, and overall bad performance.

To be fair, Blackmagic doesn’t make claims that its eGPU offering works with everything, or even most things. In fact, its website only really claims to speed up its first party video editing software, DaVinci Resolve — which I was given the option to try, but declined. I declined the invitation for two reasons. One, it’s not a program I used, and I like to test review items with the scope of how I’d actually use it. And two, I was doubtful, at least at the time, that the eGPU would only show these kind of results on one program.

I hope that’s not the case, anyway.

We’re still in the earliest stages of eGPU support. Over time, as developers latch on to their potential, we’ll see the benefits of these devices. One has to wonder though, with a non-upgradeable GPU on Blackmagic’s offering, will it still be relevant when we do?