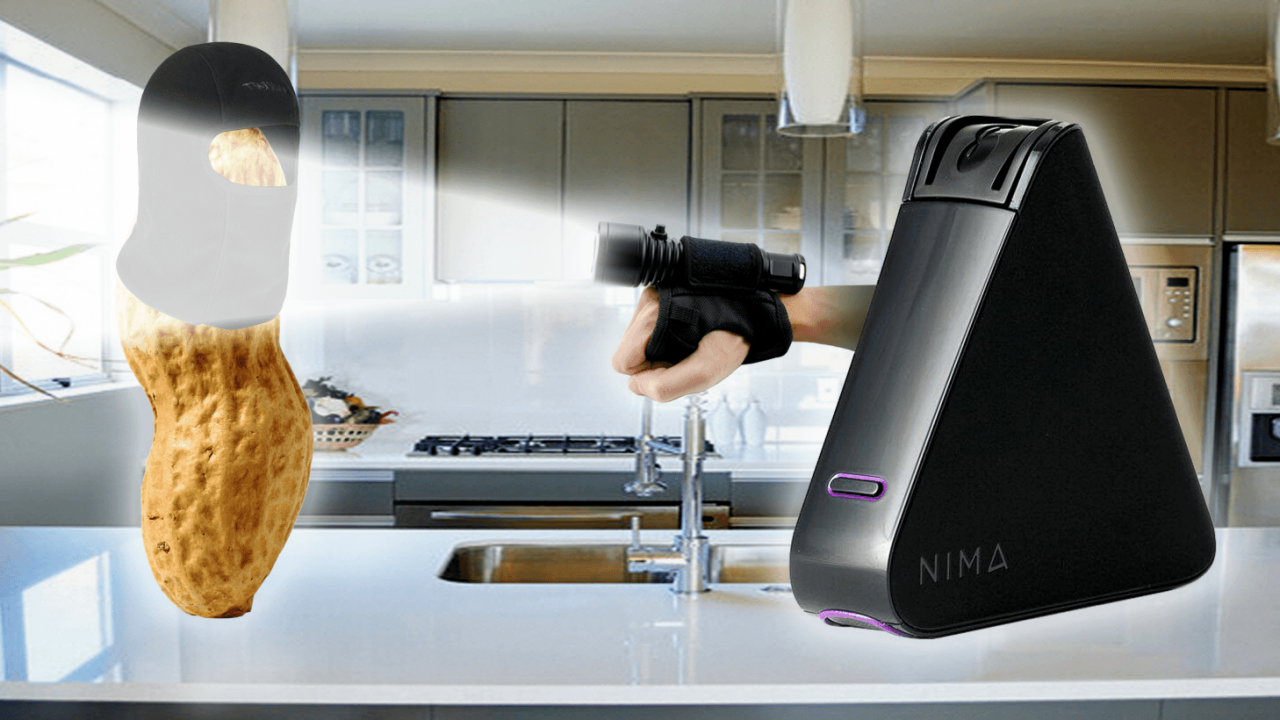 Thankfully, I don’t suffer from a peanut allergy. For the people I know who do, it seems to constantly weigh on their minds. Well, the Nima Peanut Sensor was created to solve this particular problem and ease the mental burden of having a peanut allergy.

It looks a lot like an onigiri (a delicious seaweed-wrapped, rice-based Japanese snack). Don’t believe me? Here’s a picture of some onigiri:

And here’s a picture of the Nima Peanut Sensor:

The just-released Nima Peanut Sensor has come out hot on the heel’s of the company’s Gluten Sensor. No prizes for guessing what that does.

The Peanut Sensor can detect 10 parts per million of peanut protein. It’s been genuinely scientifically tested, so it’s not just empty marketing bollocks. You can find a link to those reports here.

The device comes in two main parts, which you can see below:

The triangular block on the right is the actual testing device. The object on the left is a one-use capsule that holds the food. You place a pea-sized bit of the substance you want tested in there, before screwing it into the Nima Peanut Sensor.

Each time you do this, the capsule has to be thrown away in order to avoid future contamination. Testing takes about five minutes. The device alerts you if peanuts have been found and, if not, this adorable little face pops up:

Despite all this, I do have some reservations with the device. First off, it only has an accuracy of 99.2 percent. This means that over a thousand meals, there’ll be roughly eight occasions the sensor will miss the peanuts in the meal. How much of an impact this will have depends on how often you eat food prepared by others, for example if your office provides breakfast or lunch.

It’s unlikely you’ll get stung, but it isn’t exactly a sure thing you won’t. To be fair, the company understands this and doesn’t shy away from addressing it.

“Nima is not designed to replace your EpiPen,” Shireen Yates, CEO and co-founder of Nima said. “As a person with allergies, it’s still extremely important to do your due diligence and keep your EpiPen on-hand for emergencies. Nima is designed to provide one additional data point… to help users make a more informed decision.”

Who’s the Nima Peanut Sensor for?

In my mind, anyone with a peanut allergy and some money to burn. Or triangle enthusiasts.

The Nima Peanut Sensor is a great invention that I can imagine becoming a vital tool in the arsenal of anyone with this particular allergy. Unfortunately though, it’s not the end to this problem, just a step closer.

Anyway, I’ll conclude with a quote from a beta user of the device:

“When my son eats peanut, he can’t breathe. We like our son to breathe, so that’s why we got a Nima Peanut Sensor.”

We like our sons to breathe too, beta user. We really do.