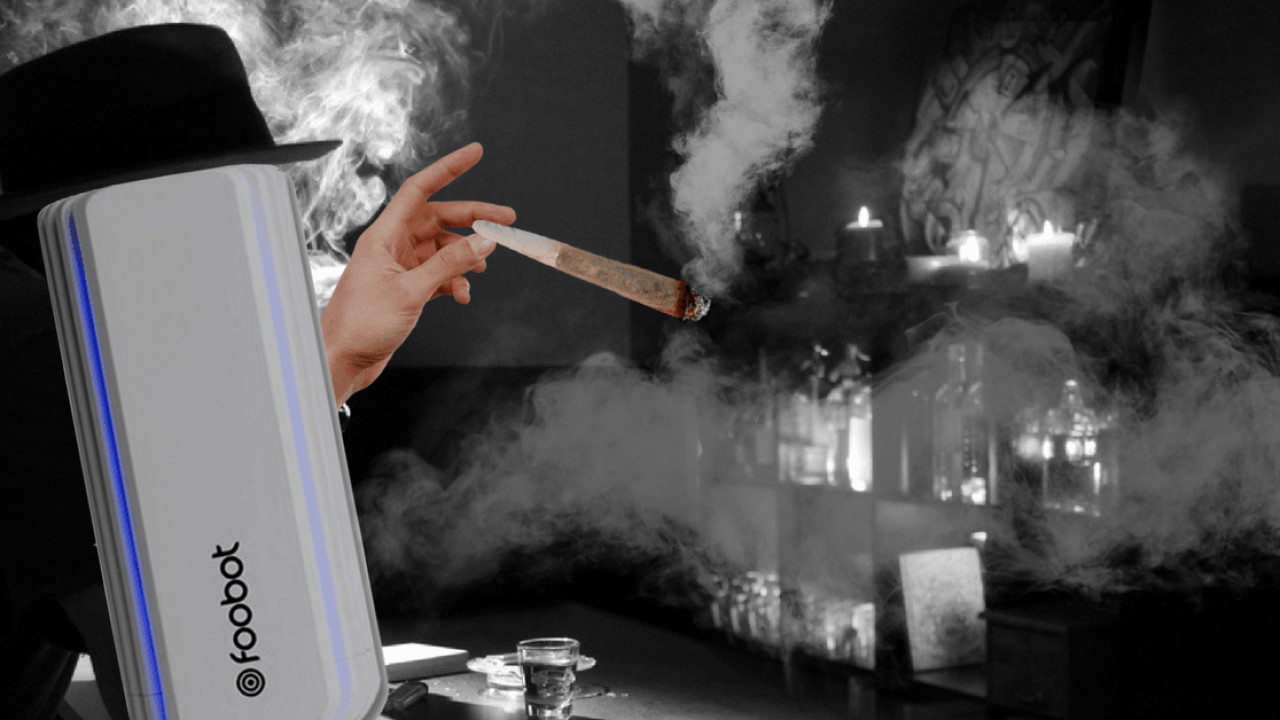 Air quality in cities didn’t used to bother me – I could cycle behind a diesel bus smoking a cigarette and feel fine. But, age has changed me. These days, my wheezing lungs seem to notice variance in air more. So, when I found out about the Foobot – an internet-connected air monitor for your home – I was hyped to get my hands on one.

You plug the Foobot in, sync with your phone, connect it to your WiFi network, and then leave it for five days to calibrate to the atmosphere in the room.

Once this has happened, the Foobot starts monitoring the surrounding air quality. On a superficial level it does this with some LEDs that circle the device. They’re blue when stuff’s a-okay and an orange color when they’re, uh, not.

Right, but what does that actually mean?

Well, as it’s internet-connected gadget, you can open the Foobot app wherever you are and have a gander at the air quality in the room you placed it:

This might be hard to decipher at first, but it makes a certain amount of sense. The Foobot broadly categorizes the air quality into four categories: great, good, fair, or poor, hence the middle part of the image.

It comes to this conclusion using the various metrics that surround the overall reading in the middle, which are:

Fine particles: The device can detect airborne particles from 0.3 µm to 2.5 µm. In other words, it’ll detect the presence of things like dust, smoke, and incense – letting you know if it’s at a damaging level.

Volatile compounds: These are carbon based vapors, such as benzene, formaldehyde, and toluene. These can arise from a range of sources, including paint, detergent, air-freshener, and similar products.

Okay… does it work?

Well, I put it through a couple of unscientific homemade tests. One involved me burning some incense, which should count as fine particles. It turned orange. I also burnt a bit of oil while cooking, which turned the Foobot orange. You know, like this:

All this wasn’t enough though. I needed to know how the Foobot reacted in real-time. So I sprayed it with some air-freshener.

Damn son, I’m gonna get one!

Well, not quite so fast. Despite a published scientific paper supporting the Foobot’s ability to measure particulate matter, there have been some complaints about the device‘s accuracy.

Take this story from David Heinemeier Hansson, the creator of Ruby on Rails, for example. Due to a problem with the air in his house, he purchased three Foobots. And, when he set them up, he found they all gave it widely varying readings – especially compared with some C02 measuring units.

In response to this, company said that the variations were “within regular operational parameters,” before finally stating that the Foobot is “not a measuring instrument.”

There are some important points on both sides here. We have to take Hansson’s story seriously, while understanding where he went wrong. This is because there’s a core philosophy every gadget fanatic should absorb: never trust non-medically approved devices with your health. Never.

The Foobot is going in the bin then

I wouldn’t go that far, but just appreciate it’s a rough guide, not a resource.

Fine. What did you actually use it for?

Now we’re getting into the crux of the matter. I didn’t use it for… much. I actually check the app and air history more than I thought I would, but that’s still only every couple of days. When the device costs $199, I’m not sure if I’m engaged enough.

The main problem I have is that if I have bad air quality, what do I do? How am I meant to improve it? One example the company use is that the Foobot will let you know when you should crack a window to balance the contaminated air, but I feel most people have a handle on that anyway. And, if that doesn’t work?

Well, you just have to live with the knowledge that your air is garbage.

It’s for the connected-home enthusiast and the person who worries about the air quality in their home. It could be ideal for asthma sufferers so they can monitor what sets them off or for parents of children with respiratory issues. Just don’t rely on it completely, okay?

The Foobot’s a slick little device and I enjoyed using it more than I thought, but I’m always wary when a non-regulated product tries to do something scientific.

Still, as long as you remember the Foobot’s role is to work as an indicator of air quality, rather than gospel, then you’ll be okay. Just don’t expect it to cure your cough.