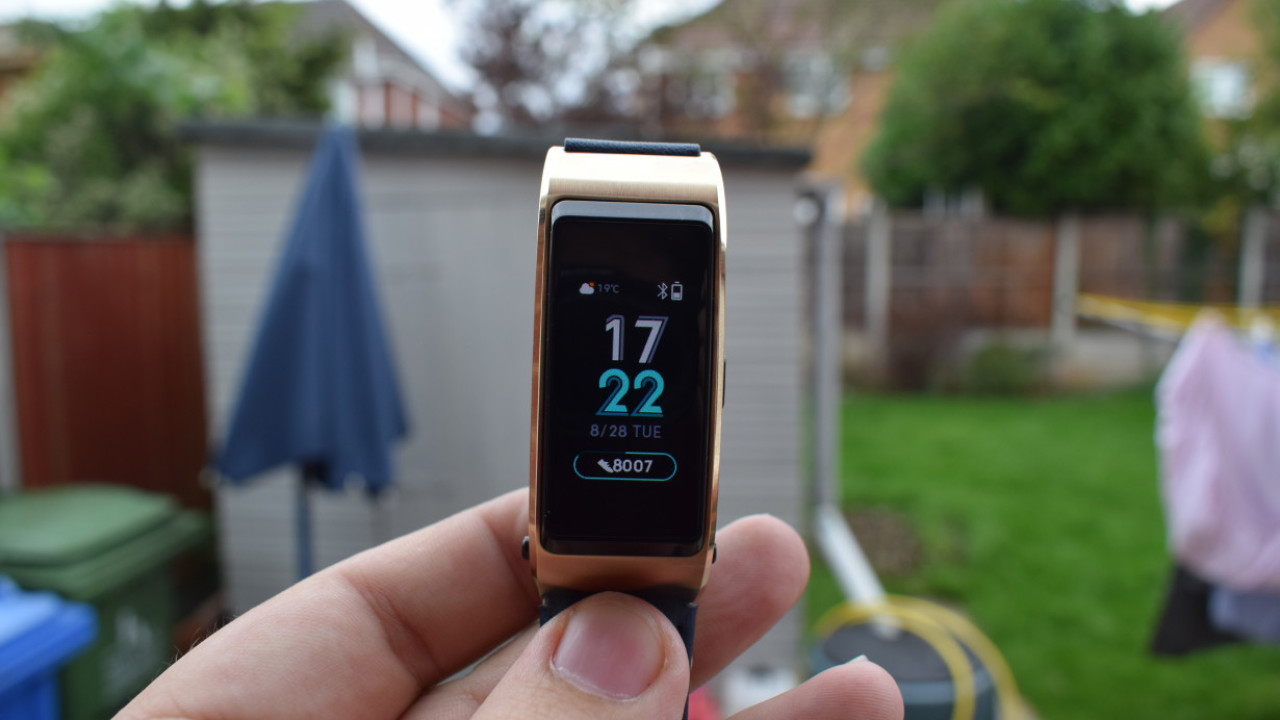 The Huawei TalkBand B5 is a fabulous fitness tracker. I’ve used a bunch, from devices from little-known brands like Amazfit, to units from more established industry figures like FitBit, and it’s easily my favorite so far.

There’s a lot to love about it. The build quality is second-to-none. It’s comfortable. Since I’ve started using it, my skin — which is more sensitive than the floppy-haired lead singer of a band headlining the Warped Tour — is yet to break out into a painful rash.

The partner app, Huawei Health, is well designed, and it tracks all the fitness lifestyle metrics I actually care about. As for the OS on the tracker itself, it’s smooth and intuitive. All things considered, I really like the Huawei TalkBand B5.

But wait, I forgot to mention something. Hidden under the hood is a legit Bluetooth headset.

That’s where the “Talk” in TalkBand comes from, and it works pretty well too. Press a button, and it gracefully pops out of its housing with a super-satisfying click, thanks to a spring-loaded mechanism. It’s comfortable to wear, and call quality is satisfyingly clear — even when out-and-about.

But do these two elements work well together as one broader ensemble? It’s a question worth asking, especially when you consider that headsets and fitness trackers aren’t natural bedfellows, and Huawei is doing something no other manufacturer has thought to do.

The answer to this question offers a better overview of the TalkBand B5’s value proposition. Curious about how it stacks up? Read on to find out more.

From the iPhone-besting Huawei P20 Pro, to its MacBook Air-rivalling laptops, it’s clear Huawei is trying to position itself as a premium brand. That aspirational philosophy is abundantly clear on the TalkBand B5, which simply oozes grace and sophistication from every pore.

The band on the unit provided by Huawei to TNW, for example, was constructed out of thick genuine leather. It looks (and most importantly, feels) legitimately amazing to wear. Unlike cheaper polymers, I’ve been able to wear it for extended periods without any discomfort.

The housing for the TalkBand unit itself is a mix of copper-hued stainless steel, paired with a sturdy ceramic bezel. This looks great, and is seriously rugged, allowing it to survive drops and scrapes alike with ease. That’s handy if you plan to use it in an active setting.

On the side of the device you’ll find a spring-loaded switch, which smoothly pops the TalkBand out of its housing, which is handy if you plan to use it to make phone calls. You’ll press this in order to charge the device via its carefully hidden microUSB port.

The TalkBand B5 boasts a highly-responsive 1.13-inch 2.5D AMOLED touchscreen that’s a pleasure to use, and offers decent viewing angles. It’s readable in bright and dull weather alike, which is handy when you live in the UK, where the climate swings from one extreme to another.

Unlike many fitness trackers, the TalkBand B5 boasts an intuitive operating system that is a legitimate joy to use. It lets you easily view activity and sleep stats with a flick of your index fingers, and lets you change certain settings, including the watch’s face.

Battery life is strong, and in our experience, easily lasts a few days between charges, although this dips markedly if you use Huawei’s more sophisticated (and accurate) sleep tracking technology.

Plugged tested the Huawei TalkBand B5 on iOS. There’s also an Android app, and it follows that your experience may differ if using this, as certain Apple-specific features (like HealthKit integration) won’t carry over.

Pairing the TalkBand B5 with my iPhone 7 was easy, and once connected to the Huawei Health app, I was able to update its firmware and view the data it’s gathered.

At its core, Huawei Health offers the data visualization features you’d expect from a fitness-tracking app.

You can see how much you’ve slept, and your overall sleep quality. The TalkBand B5 breaks it into “light,” “deep,” and “REM,” which offers a level of granularity seldom seen in this space.

The TalkBand B5 also lets you track your steps, and see how far (in terms of kilometers or miles) you’ve walked. Huawei Health estimates how many calories you’ve burned, and can show you your heartrate, via the device’s built-in sensor. With a couple of swipes, you can select a particular workout routine, although annoyingly it is unable to detect this automatically.

Fitness trackers are increasingly incorporating some element of training and coaching into their offering, and the TalkBand B5 is no exception. You can create workouts for a variety of different sports, including cycling and running, as well as create running plans, if you want to hit a particular personal endurance record.

The Huawei Health app also pairs a (very) small selection of third-party apps, most notably MyFitnessPal, which is one of the more fleshed-out fitness products on the market. This allows you to share data about things like step counts, calories burned, and how you’ve slept.

There’s something inherently weird about a fitness tracker including a bluetooth headset. I’ve used the TalkBand B5 for roughly a week, and it’s something I’m still getting used to (with difficulty).

So, here’s the thing. The headset itself is good. Call quality is more than acceptable, and when it’s stuck in my ear, I’m able to conduct conversations with ease.

While it doesn’t offer the most snug fit into my ear (and therefore isn’t really something I could see myself using at the gym or on a run), it’s not exactly loosely-fitting. Overall, it’s pretty solid.

Similarly, popping the headset out of its housing is ridiculously easy. You can transition the TalkBand B5 from wristwatch to earpiece (and vice-versa) in a matter of seconds.

That said, it feels like something you have to deliberately force yourself to use. That’s because it just doesn’t feel natural in the slightest. The process of detaching the earpiece to accepting the call feels… well… cumbersome isn’t the right word. Convoluted maybe?

And if you’re on a run, you’re probably already listening to music via a pair of microphone-enabled headphones. I’m not sure why you’d choose an earpiece over that.

There’s not much worth talking about in terms of software. Using the Huawei Health app, you can create a list of contacts accessible through the watch, and you can view your previous calls. It’s all pretty barebones.

So, to recap: the TalkBand B5 is a great fitness tracker. It’s a gorgeous piece of kit, and the software and hardware feels exquisitely designed.

It’s also a decent bluetooth headset. But do the two mingle effortlessly? Nah. It’s a bit sad, but Huawei has built two decent devices and stitched them together, and it doesn’t really work.

But that shouldn’t put you off the TalkBand B5, which stands tall on its own merits as a fitness tracker. The device is currently available in the Middle East and China, where it fetches a price of 999 yuan (roughly $150 USD). Annoyingly, it’s yet to appear on Amazon in the US or UK, although that should happen fairly soon.