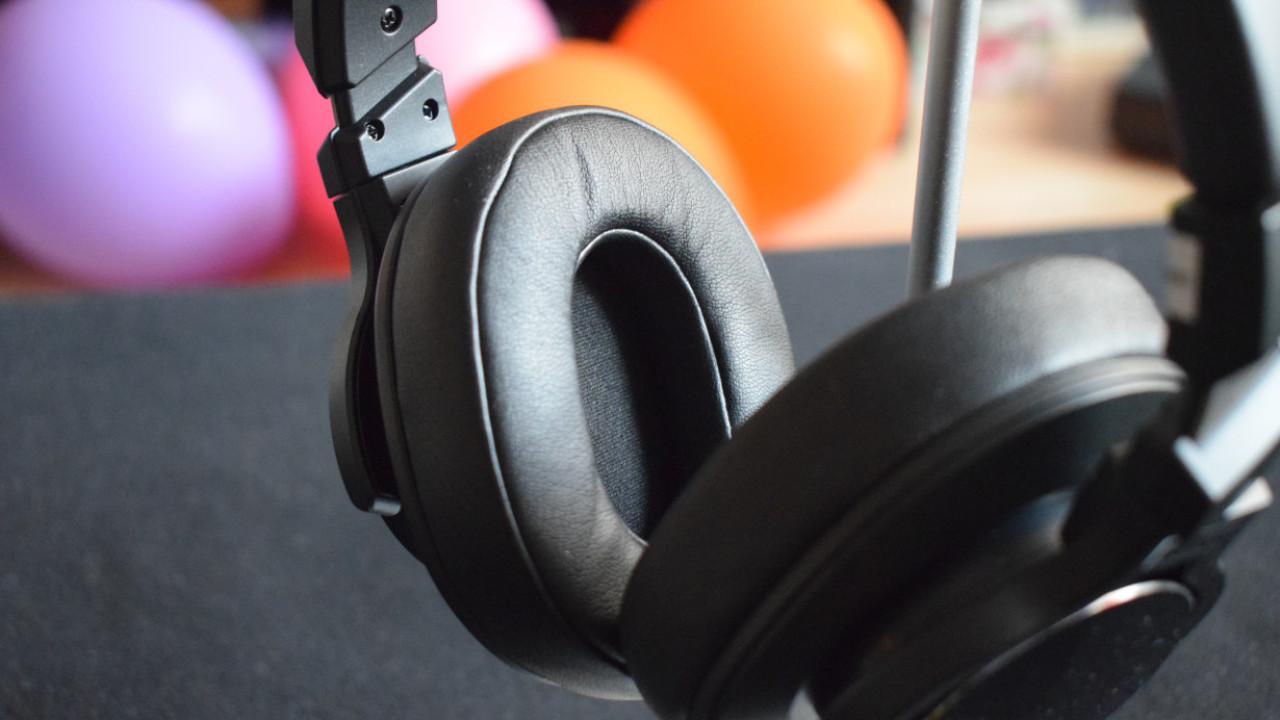 The US firm recently launched its latest wireless headphones, the Mixcder E8’s, which offer 18-hours of battery life and active noise cancellation (ANC) for the truly bargain-basement price of £60.

I’m fascinated by little-known audio brands, because they often have the capacity to surprise. In the past couple of years, I’ve stumbled across genuinely good gems from brands as obscure as TaoTronics and Vava. So, how does Mixcder stand up?

Well, you’re just going to have to read on, aren’t you?

But first, let’s clear something up.

There’s a vast gulf of difference between the Mixcder E8’s and Mix, the editor of TNW’s crypto sub-brand, Hard Fork.

The E8’s come in a soft fabric case, and look decidedly utilitarian. They’ve got big chunky buttons and the earcups are cushioned with soft foam.

Mix, on the other hand, looks like Agent 47 took a sabbatical from killing goons in order to wrap his shiny, chrome-domed head around Blockchain.

In terms of sound, the E8’s diligently play pretty much any audio you send its way — from jazz to DJ Jazzy Jeff; podcasts to Pantera.

Mix, on the other hand, tends to just talk about weed and crypto.

Hang on, did you agree to review this just to make that joke?

I am a serious tech journalist.

Haven’t you got some headphones to review or something?

Right, so let’s get down to business.

When you first get your hands on the Mixcder E8’s, you can immediately see where corners have been cut, ostensibly in order to help it achieve its fairly low price.

I’ve joked that if East Germany existed long enough to get into the wireless audio business, it’d produce something like the Mixcder E8. There’s something decidedly un-flash and utilitarian about these cans, which ultimately is a bit of a blessing and a curse.

Adorning the rim of the earcups are a mélange of buttons, all distinctly chunky and square. On the plus side, they’re also supremely clickable, making it easy for you to adjust volume or activate ANC while on the move. I like that.

Speaking of the earcups, it’s worth pointing out that they’re weirdly comfortable. They’re wide, and constructed out of a soft memory foam, and you can easily forget you’re wearing them, making the Mixcder E8’s ideal for long listening sessions and Netflix binges. That’s nothing short of miraculous when you consider how bulky they are.

On the downside, they do get a bit sweaty. And by a bit sweaty, I mean that if you wear them in the middle of a heatwave, they’re liable to end up smelling like the inside of Tyson Fury’s boxing gloves.

One frustration I had with the Mixcder E8 is they don’t fold particularly well. Although they’re sufficiently rugged to be thrown into a backpack, they do take up a fair bit of space, whch is something most travellers will be wary of.

That said, if you choose to use the included carry case, it’s a bit of a moot point, as, in terms of dimensions, it’s roughly on par with what you’ll see with other brands. The carry case included with the Anker Soundcore Space NC’s is roughly the same size as the Mixcder E8’s, for example.

Inside the carry case, you’ll find the usual assorted gubbins. This includes an instruction manual, microUSB cable, and a 3.5mm audio cable.

The latter comes in pretty handy. The Mixcder E8 can run for 18 hours wirelessly, but this already respectable battery life stretches to 40 hours when using a cable.This improved longevity is welcome on long flights, or during times when you don’t want to break from listening to charge your cans.

That nicely brings me on to the Mixcder’s ANC capabilities. When it comes to filtering out outside noise, these do a fairly decent job. For example, I recently flew across Europe in an antiquated Boeing 737, and it managed to filter out the throbbing hum from the plane’s aged, wheezing engines.

That said, it copes less well with higher frequencies. If you buy these hoping to filter out the noise from your co-worker’s expensive mechanical keyboard, prepare to be disappointed.

So, here’s the most important part: how does the Mixcder E8 stand up from a pure audio perspective?

Eh, for £60 they’re alright, I guess. There are some glaring flaws, but given the price point, they’re forgivable.

One of the tracks I used to evaluate these cans was Taylor Swift’s Shake It Off, from her 2014 album 1989. Compared to the rest of Swift’s repertoire, Shake It Off is pretty stripped down, even though it represented a major departure from her usual Country-tinged fare.

The song opens with a punchy drumbeat provided by Swedish producer Shellback, who effortlessly blends cymbals and bass drums. This is accompanied by an unequivocally catchy brass hook.

Although the E8’s did a decent job at reproducing the lower notes, it unfortunately didn’t quite follow through in the highs-and-mids.

I observed the same profile in tracks like Smells Like Teen Spirit, from Seattle’s grunge legends, Nirvana. Although the bassline was clear and punchy, even at higher decibels, everything else felt fairly flat and sterile.

It’s worth noting that activating ANC has a discernible influence on the levels of tracks. In addition to filtering outside noise, it also emphasizes the highs-and-mids. This doesn’t always sound good.

The Mixcder E8 packs a microphone that allows you to place phone calls hands-free. I haven’t really got any criticisms here. In my experience of using the cans, the recipient was always able to clearly discern what I was saying.

The Mixcder E8 is a bit of a mixed bag (pun intended), but there’s a fair bit I actually liked. To recap:

That said, there were a fair few letdowns. The most significant ones are below:

Despite that, I’d still recommend it. Despite its many warts, the Mixcder E8 represents solid value for money. That said, there’s stiff competition within its price bracket, particularly from insurgent brands like Taotronics and Anker. Both companies have released compelling ANC-equipped headsets in recent months, which we reviewed and loved.

With this in mind, before you drop down your hard-earned cash for the E8’s, I’d strongly encourage you to check out the competition.

You can grab the Mixcder E8’s on Amazon in the UK. It’s also available to purchase in Germany, France, Spain, and Italy. Alas, the E8’s aren’t currently available on Amazon US. If you’re based in the States and are tempted to import a pair, remember to factor customs duties into the overall price.