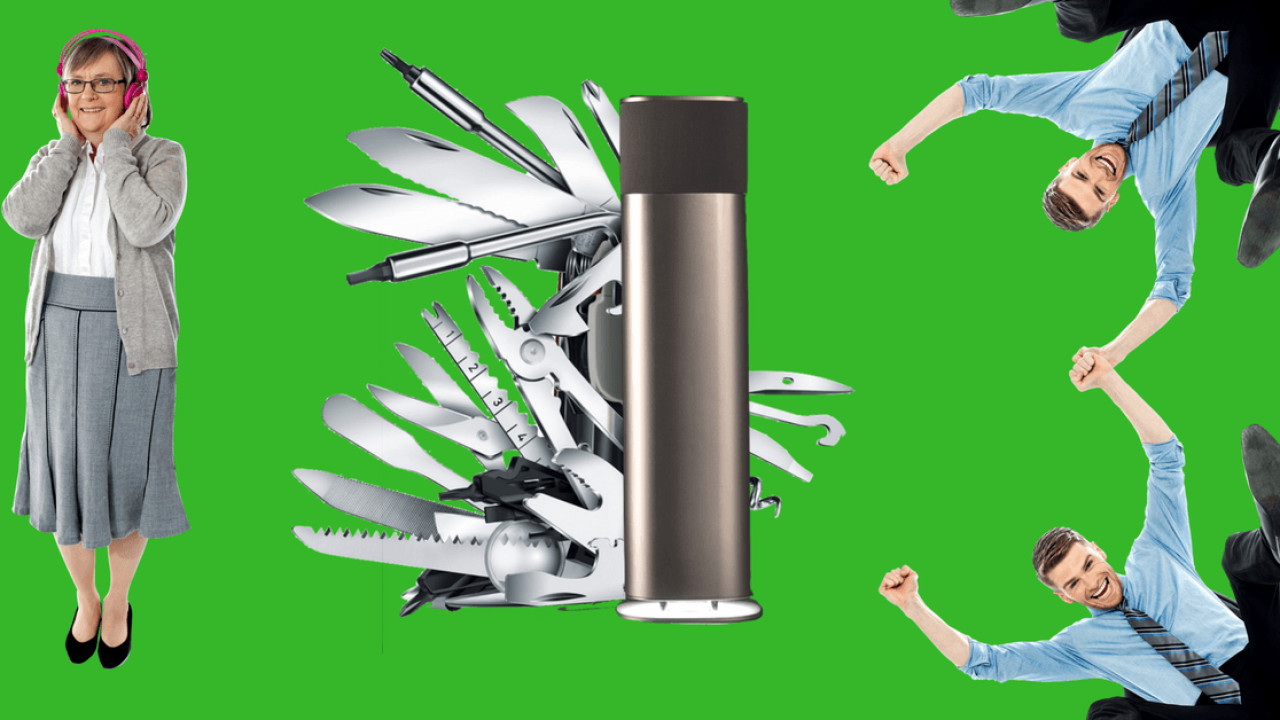 Bluetooth speakers are ten-a-penny these days, but Studio19 believes its Solo E500X-EQ (catchy, I know) stands-out from the crowd. And, well, it’s half-right.

The most obvious point of difference is the set EQ sliders on top of the speaker, which allows you to change the balance of songs on the go. There’s also the fact that despite being over half a meter tall, it’s portable and has a battery that lasts for around 8 hours of play time.

Another bonus is that it has three different sound settings you can select (for music, movies, and gaming), as it aims to be able to handle your full range of audio desires. It also has a sleek look in line with current design trends (like this motion alarm or, you know, any Apple product).

But, yet, at the same time, it also looks a lot like a huge vape:

You’re not wrong, Callum, but I tend to buy audio devices more for how they sound than look.

In regards to the audio quality, the Solo E500X-EQ does… okay. It’s far from terrible, but, honestly, I was expecting more from a device that costs £400 (approximately $530).

The bass on the Solo is a good place to start. One of the device’s selling points is its “Dual Pressure Air Compression” technology, something patented by the makers Studio19. Basically, this is a way of creating a deep and full bass using… air, meaning there’s no need for a bulky subwoofer. And it works, kinda.

On tracks like Roots Manuva’s ‘Witness (1 Hope)’, the bass has a meaty thud that anchors the song without overwhelming it. But, on tracks not built to be so bass-centric, such as Lotus Plaza’s ‘Eveningness,’ the Solo produced a low-end boom that overwhelmed the song, rather than complimenting it.

Now, it’s during moments like this the EQ sliders on the top of the device came in handy, but I found I was having to make adjustments too regularly. Finding a sweet spot was more difficult than it should’ve been.

So it’s not that great?

Well, the Solo does have a fair amount of positives. It pumps out a lot of noise for a portable speaker and is a fair chunk louder than my beloved UE BOOM 2. Generally, songs sound crisp and rich on the Solo, but I would say this speaker is better suited for people who enjoy electronic music, hip hop, and other bass-heavy music.

It also has an HDMI and aux input, which makes it easy to connect to your TV and non-bluetooth devices. I found that switching between the three aforementioned sound settings (movie, music, and game) didn’t make a whole lot of difference, so I ended up adjusting the EQ sliders manually. When I did use the Solo for gaming or watching a film though, I found the booming bass to be more of a boon than drawback.

Still, for $530, you can grab separate components like the amazing Onkyo A-9010 amplifier and the Klipsch R-15M bookshelf speakers, and have one hell of an audio set-up at home. I put this thought to the company.

“Our speaker is designed to give you freedom and flexibility,” Hoj Parmar, CEO of Studio19 told me. “It can be taken from room to room, or outside in the garden… it’s a really portable HiFi entertainment system.”

That’s something I did find impressive about the Solo. It was easy to literally pick up and take with you when you were chilling in the lounge, cooking, or hanging outside. Even though, I think the company should include a travel case with purchase. While the Solo isn’t particularly heavy (I’d guess around 5kg) moving the device can be awkward due to its size, which does limit the speaker’s portability.

When I asked Studio19 why someone should choose its speaker over a product from, say, Bose or Harman Kardon, the company pointed to the versatility of the Solo. Specifically, Parmar highlighted how the device “converges the audio experience across music, movies, and gaming.” He believes there’s “no product on the market comparable” with the Solo and, in many ways, he’s not wrong.

An ominous way to end that section there, bud.

The Solo’s not really like any speaker I’ve used, which is both a positive and negative. For every good point (the EQ sliders on the top), there’s a bad one (the fact you can’t see the numbers in certain light).

Take the LED strip at the base of the Solo:

This makes the Solo look great in certain situations, but it also automatically turns on when you power-up the unit – irregardless of whether you had it turned off when you last used the device. And, while the speaker works great, the lack of a companion app to turn on the speaker, activate the light, or adjust the EQ is a shame.

Right, so what do you think of it overall?

Basically, it’s a good all-around speaker, but not an exceptional one. Versatility is its main differentiating factor. It can handle almost any situation you throw at it, but you’re more likely to be wowed by the different ways you can use it, than its audio quality. In other words, it stands out from the crowd by being the most average.

How useful this is depends on your situation. Looking for a speaker to do everything? You could do far worse than the Solo E500X-EQ. But, if you want a speaker for a specialized use – say as on-the-go audio device or just for the TV – then I’d suggest you look elsewhere.