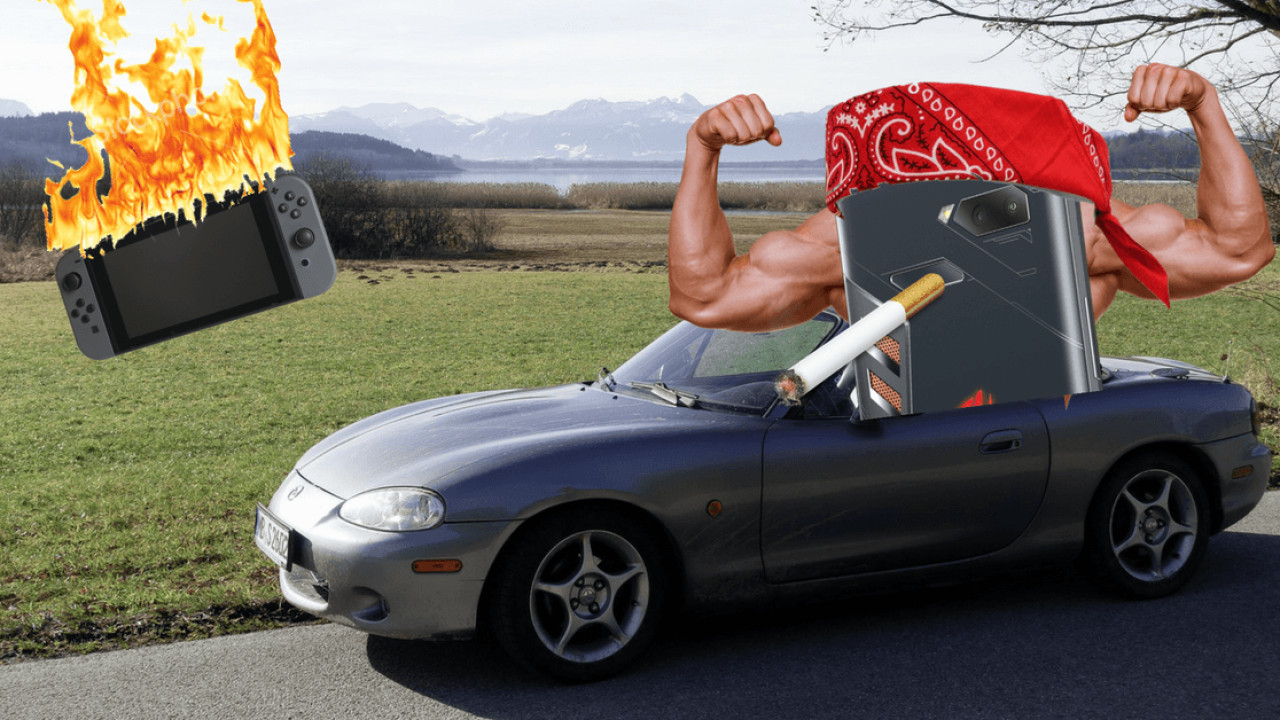 Republic Of Gamers (ROG) – ASUS’ gaming brand – has announced its first ever phone. Can you guess what it’s called? Go on, have a go.

Yep, you got it, the ROG phone.

Unsurprisingly – it does come from an arm of ASUS called Republic Of Gamers after all – the main focus of the device is, uh, gaming.

As you’d expect, the device is pumped with as much firepower as Chinese New Year (a 2.96GHz Qualcomm Snapdragon 845 CPU, a Qualcomm Adreno 630 GPU, 8GB RAM and an AMOLED HDR display, if you’re interested). It also has the impressive accolade of having the highest specifications of any Android phone ever. This, friends, is a phone that wants to eat your children.

It’s not just power that the ROG Phone has though. Rather than having the gaming standard shoulder-style buttons on the device, it has something called AirTriggers. These are basically pressure sensors and remove the need for loads of buttons on the screen itself.

The phone also has more of a gaming look than the standard dark rectangles we expect from mobiles these days. Well, okay, it’s still a dark rectangle, but it also has a metallic ridge on the back that functions as a cooling system. Oh yeah, that’s called the Vapor Chamber. Hmm.

It’s a style of design that you either think is badass or a bit ridiculous – a thought we’re going to come back to at the conclusion of this piece.

When I got it in my hands, the ROG Phone felt well-built and sturdy. The gameplay experience was also quality, with impressive graphics and minimal blurring.

That sounds good and all, but you’re still just describing a phone

Right you are. Ramping up stats and making it look a bit more #EXTREME than your iPhone doesn’t turn a mobile into a dedicated gaming device. Luckily, ASUS didn’t stop there.

Along with the aforementioned AirTriggers, the company has also created a range of accessories that turns the ROG phone into something resembling a portable console.

The first is a detachable fan pack (the ‘AeroActive Cooler,’ which sounds like chewing gum) that slots sideways over the phone to cool the device while gaming. Here, have a little video of it:

Then you have two other accessories. The first is a handset (the ‘Gamevice controller,’ which sounds like a sex toy), something that makes the ROG phone kinda look like a Nintendo Switch.

This controller can also be used with an accessory called the WiGig Dock. This attaches to the phone and then broadcasts the display to a base station that’s plugged into the TV. Streaming games is something that the Chromecast doesn’t let you do and the experience with the ROG Phone was impressively lag-free.

ASUS also introduced a folding, clamshell style controller (the ‘TwinView Dock,’ which sounds like a seaside attraction). The ROG Phone slots in the top, there’s a 6,000mAh battery for extra play time, and an extra screen on the bottom. Kinda like, you know, a Nintendo DS.

I didn’t have much time with them, but the accessories felt sturdy enough that they’d both last for a long time and be comfortable for long sessions.

Wow – that looks kinda cool, bud. One thing though… why?

I have some reservations about the ROG Phone too, disembodied voice.

This isn’t the first dedicated gaming mobile out there – with the equally as imaginatively titled Razer Phone turning heads in some circles – but the category seems strange to me. So, I asked ASUS who the phone’s actually aimed at.

“People who appreciate innovation,” Ivilina Boneva, Marketing Manager Systems Benelux told me. “People who like the freedom of true multitasking,” and are searching for “one device that allows them to do everything.”

Fair. ASUS has tried to do something different than the majority of phone brands. But, on that note, wouldn’t people just choose one of the market leading phones from Apple and Samsung? It’s not like those devices are lacking impressive hardware.

Boneva responded to this by pointing towards the passion gamers have for their hobby. She said they will buy this phone for “the same reason they buy powerful gaming laptops – they don’t compromise with the best experience of the game.”

According to data from App Annie, total app store spend is projected to increase 30 percent year-over-year, hitting $110 billion in 2018. Games are predicted to account for around 80 percent of this, which means, well, there’s a lot of money to be made.

When you consider that mobiles are now powerful enough to run ports of PC games like Fornite – which, as we know, people play religiously – ASUS’ decision to launch a gaming phone could prove to be prescient.

But will gamers buy an in-between device like the ROG Phone? Especially with the accessories it needs to deliver an optimum performance – why wouldn’t they buy something like the Nintendo Switch?

Boneva had a frank response to this: “A mobile gaming console is an additional device to carry, while mobile phones have become an inseparable part of our lives.”

Yet, I’m not sure this is completely true – just look at the tablet market. While they have been reasonably successful, people still carry a phone and a computer, because those devices do their separate jobs better than one that tries to do one too much.

The Switch is the only truly successful dedicated mobile gaming device currently on the market. But, an issue with Nintendo for many gamers and developers is its closed ecosystem and limited catalog of titles. This is a problem the Android-running ROG Phone won’t suffer from and there’s a chance it could hoover up a lot of the market turned off or spurned by the Nintendo brand.

Good points. If I was going to buy this – and I’m still not sure I will – when can I get it?

The ROG Phone doesn’t currently have a solid release date. Most likely though, it’ll come out deep into the second half of 2018. There’s also no concrete information on pricing, but, judging by the specs and the quality of accessories, it’s not going to be cheap. You only have to look at the cost of other Snapdragon 845-based devices – like the entry level OnePlus 6 at $529 – to see the ROG Phone will have a premium price tag.

To sum up, I’ve got a lot of respect for ASUS in just ploughing ahead with the ROG Phone. Releasing it is a gamble, something that certain tech companies seem to be adverse to currently (*cough*Apple*cough*), so it’s refreshing to see a company go after a market that might not actually exist.

Will it be worth it though? To link back to earlier, I have a feeling you knew almost immediately whether you think the ROG Phone is badass or a bit ridiculous. It really is an evocative piece of kit and that’s how this phone’s future will play out. If you’re a serious gamer who’s been searching for a way to play on the go, I’d assume you’re salivating with excitement. As for the majority of phone buyers though?

Well, it’s just not made for you.