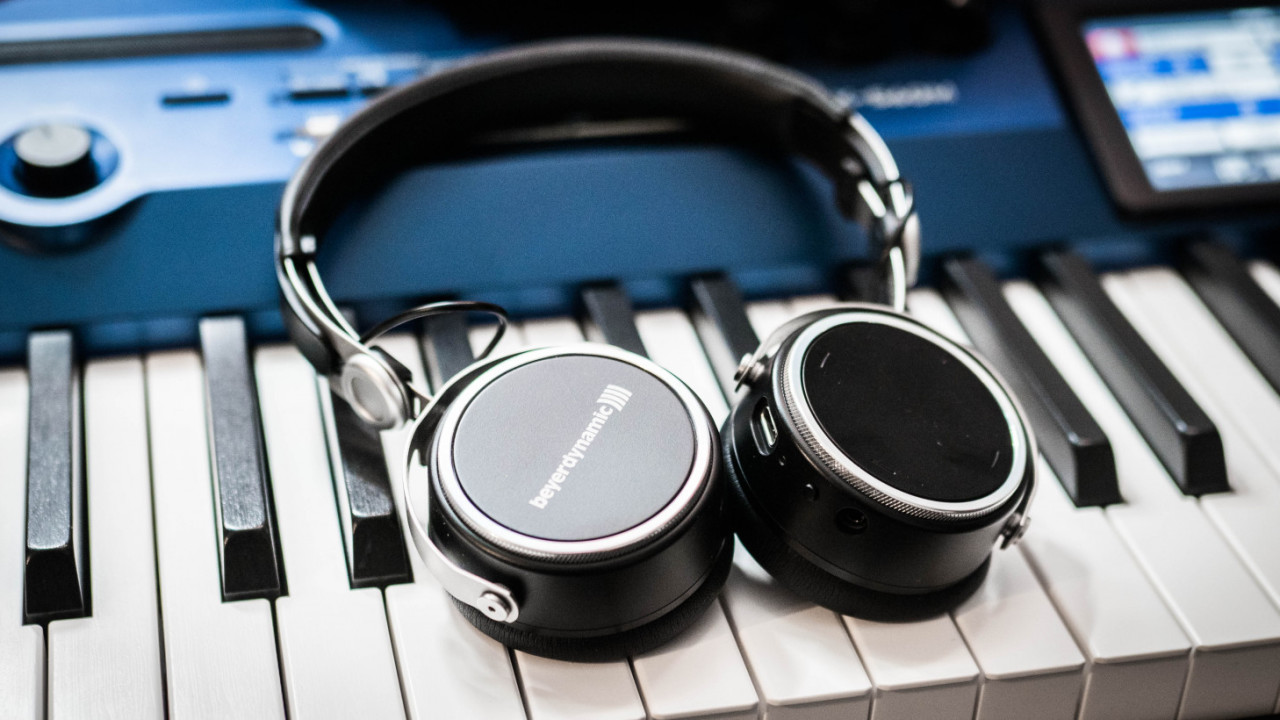 But for some people, they hit right spot. They have a wider sound than in-ears, but can fit into a bag much more easily than over-ears. They’re less awkward to wear around the neck all day, but will still keep your ears toasty in the winter. Problem is, you can usually get significantly better sound from over-ears for the price.

And then I tried Beyedynamic’s $450 Aventho Wireless. Beyerdynamic is known for its high-end audio gear, and it’s one of the few companies that makes premium on-ears; the DT1350 and T51P are some of the best ever made. Since I began testing the Aventho Wireless, I’ve hardly wanted to wear to any other headphones – whether on the go or at home.

I dig the no-nonsense design, for one. Beyerdynamic is known for its industrial design and build quality, and that remains true on the Aventho. They feel sturdy enough that I don’t hesitate to toss them in my camera bag unprotected, and I like the vintage-looking combination of metal and plastic. It’s also nice to see headphones with touch controls that don’t suck or trigger accidentally all the time. I particularly appreciate that they have a rewind feature – something too many Bluetooth headphones are missing.

They’re also among the most comfortable on-ears I’ve used, with plush vegan leather that blocks outside noise surprisingly well – as good as some IEMs (in-ear monitors). Some will lament the lack of active noise cancellation, but I’m the type of person who uses noise cancellation as a last resort. Even the most refined noise cancelling degrades sound quality to some degree. Besides, I find the Aventho do a particularly good job of muting chatter, something many noise-cancelling headphones fail to do.

Certainly, it would’ve been nice to at least have the option – especially in $450 headphones – but nobody complains about the lack of noise cancelling on premium headphones where sound quality takes precedence over convenience. In that regard I find Beyerdynamic mostly justifies the price.

The Aventho Wireless sound really good. So good, I’m not convinced larger over-ears hovering around its price range are clearly better. Not Bluetooth favorites like the B&W PX or the MDR100X, nor audiophile favorites like the HD660 S nor the Audeze EL-8.

That’s not to say they’re always the most resolving or have the most technical prowess, but the Aventho have a tonal balance I’m particularly fond of – and one I think would appeal to most people. They’re slightly on the fun side of neutral, with more bass presence and warmth than many headphones. I also appreciate the measured bass response: ample sub-bass extension with an impactful midbass that doesn’t muddy up the midrange. Treble is excellent too, with defined detail; cymbals sound like distinct instruments rather than the splashy sound you’ll get on lesser cans. Nor do they sound sibilant – they’re easy to listen to.

The headphones connect via AptX HD (or AAC for the Apple crowd), making for high quality wireless transmission. The headphones do come with a 3.5mm cable should you want to connect the old school way, but you can also connect them directly to your PC via the USB-C, which is a neat bonus.

But what surprised me most was their presentation. They’re closed on-ear headphones, so the won’t throw sound quite as far left and right as their cirumaural brethren, but the Aventho have precise instrument separation that makes music feel alive. That also makes them a great choice for a multitude of genres, handling a complex orchestral crescendos just as easily as post-bass-drop DnB. And expansive dynamics helps add an element of depth better than some larger headphones too.

It gets better. If you connect the headphones to Beyerdynamics MIY App, you can perform a hearing test that tunes the headphones to you particular hearing abilities. I almost didn’t end up testing it because the app was incredibly glitchy and simply wouldn’t detect my headphones on three different devices, but a recent firmware update mostly rectified the issue.

After the test, the headphones opened up even more, with better instrument separation and additional clarity. It also gives the overall sound a volume boost, although this could lead to clipping when used at max volume (which you probably don’t need, they get really loud). You’re also able to tweak the intensity of the effect if you find it alters the sound too much. As a neat bonus, these changes are uploaded to the headphones themselves, so they to any device you connect the headphones to via Bluetooth, although they won’t affect analog sources.

In case you can’t tell, I really like these headphones. I’m lucky though; I get to test them for free. $449 is a lot of cash for anyone to drop on headphones, and some might be put off at paying this much for on-ear headphones when there are so many great over-ear headphones for the same price. But if you’re in the market for new portable cans and have the budget, don’t be put off by the Aventho’s small size. Just because they’re easier to stuff into a backpack or purse, doesn’t mean they punch just as hard as the big guys. They might just punch harder.