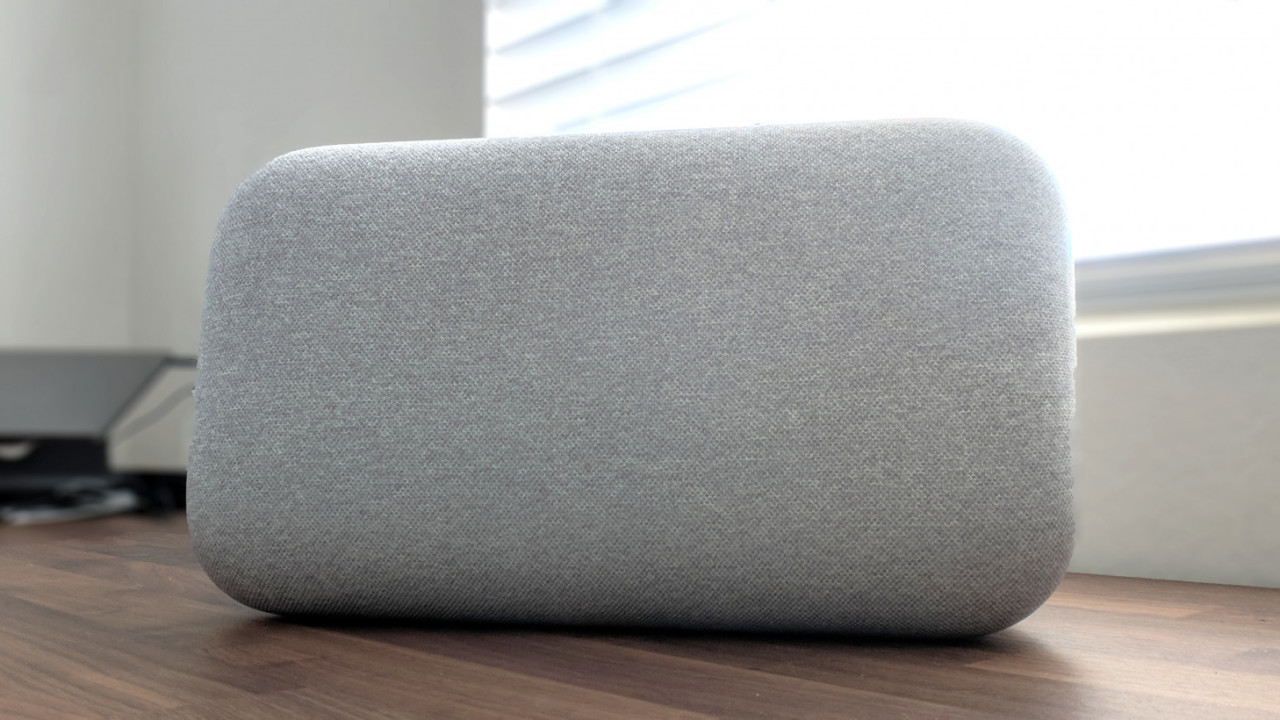 There’s never been a better time to buy a smart speaker.

Once dominated by Amazon, the space has exploded in recent months to include stellar offerings from Apple, Sonos, Microsoft, and my pick for best in class: Google. Google’s Home Max isn’t perfect, and the $399 price tag might be a bitter pill to swallow for those looking to upgrade from the original Google Home (or an Amazon Echo) but it checks enough boxes to make it the most well-rounded offering in its class.

Weighing in at almost 12 pounds, it’s a giant among its peers. Clearly Google aimed high, building a speaker that’s closer in size to Sonos’ flagship Play:5 than its previous Home offering — which offered an okay speaker, but was really just a dressed up assistant much like Amazon’s Echo. Truth be told, a speaker this size may push some toward Apple’s HomePod (about half the size), but there’s a lot to love if you can stomach the footprint.

Inside you’ll find four drivers — two 4.5-inch long-throw woofers and two 0.7-inch tweeters — six Class-D amplifiers, and six far-field microphones. Outside there’s a switch to mute the microphones, a USB-C port, and a 3.5mm input jack to hook the speaker up to an external audio source.

At first I was rather confused about the USB-C port — though I always appreciate the thought — but Google tells me this works with an Ethernet adapter for areas with spotty Wi-Fi. I feel like a plebeian using it to charge my phone, but it works great for that too.

The components are wrapped in a plastic shell available in two colors: “Chalk” or “Charcoal.” Or, in layman’s terms: dark grey or white. Its shell doesn’t feel high-end like speakers encased in wood, nor does it offer the aesthetic value, but Max doesn’t feel cheap, either. We’ll consider the aesthetic value a neutral; it’s not visually offensive, but it’s styling doesn’t convey the $399 price tag, either.

Strictly personal preference, but I wish Google would have taken some chances here.

As for control options, there’s a touch strip on top that offers the ability to turn volume up or down by swiping right or left. Or, you can tap the center to pause or play. Tap works as intended, but the volume control swipe is finicky and not-at-all reliable. Luckily there’s a mobile app that offers fine-grain controls for everything else, including bass and treble — which I didn’t find myself adjusting all that much.

With a pricy speaker though, it’s all about sound. Google excels here. It’s not Sonos, but it’s closer than you might think. Vocals are clear, if a bit sharp at times, and low frequencies are as punchy as you’d expect in a speaker this size. The low end occasionally drifts out of control but overall performs admirably and compares favorably to most speakers in this price range.

As single enclosure, Home Max does have stereo capabilities — it has two woofers and two tweeters, remember — when positioned horizontally. When you stand it upright, sound switches to mono, allowing you to connect a second speaker for “real” stereo sound. While capable of stereo, the soundstage isn’t really there in the horizontal orientation, and I didn’t get a chance to try two units in a traditional stereo configuration.

It’s clear enough to separate individual instruments, but doesn’t really offer the opportunity to place them, mentally, on a stage in front of you. Some tracks feature excellent spacing and clear representations of the soundstage. But more often than not, they don’t. It’s really hit or miss.

Max still sounds great. But given the close proximity of the internal speakers, just inches apart, this is a problem Google is going to have to AI its way out of.

Volume-wise, it’s impressive. In a small space, Max gets far louder than I’m comfortable listening to. In larger rooms, it offers vibrant, rich, room-filling sound assuming it’s orientated in your direction; it’s not omnidirectional, like Echo.

Home Max features a smart tuning mechanism called “Smart Sound” that calibrates the speaker for the size of the room it’s in. It’s a bit like Sonos’ ‘TruePlay’ but without the frenetic waving of an iOS device to calibrate the sound (TruePlay also doesn’t work with Android devices). Unlike Sonos, there’s no need to recalibrate; move it, and Max automatically adjusts the sound.

It’s unclear how beneficial this is, as there’s no option to turn the feature off. To me, it seemingly sounds the same in every room I put it in. So if that was the goal, mission accomplished.

Perhaps the biggest draw of Home Max is the always excellent Google Assistant. The six far-field microphones do an excellent job of picking up voices, even from distances of 20-ish feet or so. Even with loud music, I can typically trigger the assistant to adjust volume, skip tracks, pause, and interrupt whatever I’m listening to in order to ask a question.

My favorite feature though might be Voice Match. Once set up, Google Assistant will deliver differing commute times, calendar entries, and daily briefings depending on who’s doing the asking. It works exceptionally well at discerning who’s asking the questions and delivering the appropriate results.

On the connectivity front, Max works with any service that supports Google’s Cast protocol. Google Play Music, Spotify, Pandora, and others work without issue. Apple Music does not. You can, however, stream music over Bluetooth, or plug in your device using a 3.5mm jack — if yours still has one.

For the money, Home Max is easily best in class. It doesn’t sound quite as good as the Sonos One (but it’s close, real close); and it’s not as small as Apple’s HomePod; but when measuring features against price it’s still the superior option.

Options, though, are plentiful. And my one complaint about Home Max is that a speaker of this size can’t serve double duty as a sound bar, or even stereo speakers for your home entertainment center, without some rather unreliable hacks. And most of those, unfortunately, have real issues with latency that make it all but unusable as anything other than what Google intended it to be: a smart speaker that sounds great when playing music.

It’s a disappointment, but not enough to keep me from recommending it. Fingers crossed we’ll see an update in the future that could find the device moonlighting as something with sound bar-like functionality.

HomePod might be the best choice for an all Apple ecosystem. Or audiophiles that care less about a great smart assistant and dazzling AI might favor Sonos. And those just looking to break into the smart speaker game would be over the moon with a $100 Echo.

It’s a good time to be a smart speaker enthusiast.