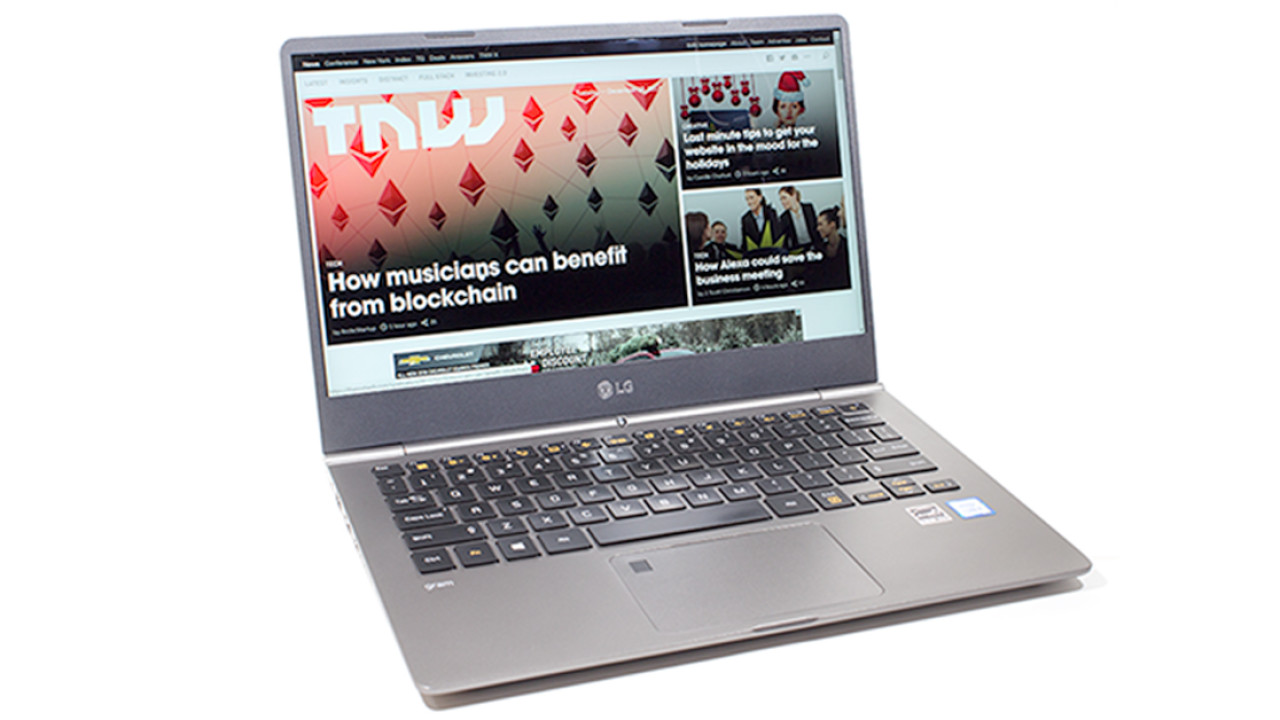 LG’s Gram is an incredibly lightweight little laptop that succeeds in finding a happy medium between power and portability. I tested out the 13-inch model and realized size really does matter: smaller is better.

My current laptop is a big, heavy Alienware gaming computer that often sounds like it’s going to blast-off thanks to the numerous fans housed inside of its massive shell. It’s designed to be portable in the sense you can move it from one solid surface to another. I wouldn’t dare set it on my bed for fear it would suffocate and overheat.

The Gram, on the other hand, is a demure little silvery thing that weighs as much as a dinner plate and never makes an unwanted peep. After an hour watching Netflix its metal surface is still cool to the touch. It practically begs you to carry it around with you everywhere you go.

And I absolutely love the way it looks. The unit I tested was a nice dark silver color that looked a bit classier in non-reflective metal than it would have on shiny plastic. Plus, the Gram takes up practically no space. It’s actually less intrusive than a spiral-bound notebook.

Thanks to the magic of Windows 10, testing a new piece of hardware is, well, a piece of cake. I cracked open the LG Gram, signed in to my Microsoft account, and then immediately installed Chrome.

The first test a laptop has to pass in order to be even slightly useful to a technology journalist is the ability to operate with an infinite number of browser tabs open.

Infinite might be too lofty an expectation, but luckily the Gram was able to handle more tabs than I needed. I purposefully opened about 20 tabs, many of them playing videos, and had absolutely no freezing or stuttering when switching, closing, or dragging tabs. It was fantastic.

It has fairly decent specs:

Obviously you won’t be playing AAA games on it – it isn’t built for gaming, but you can still play Minecraft. The processor, memory, and connectivity are all fine for most general day-to-day activities like web browsing or streaming media.

Even though the 13-inch model is the least expensive Gram, it seems like there are a few more concessions than absolutely necessary on a premium priced device. I would have liked to see a larger hardrive, at least 500GB, and the screen seems a bit “meh” at 1080 resolution.

Don’t get me wrong, the touchscreen capability is implemented well and the display looks fine. It has a high gloss look that works great indoors, but it may not be ideal for people who do a lot of outdoor computing. It just seems like HD is the bare minimum here and LG could have put this machine over the top with a better screen and HDD.

The rest of the hardware is better than I expected. The touch pad on the LG Gram I tested was the best I’ve used on a laptop. I had to learn where to press it to consistently get my left click to work, but otherwise it was impressively responsive. Its keyboard is a winner too, the keys have just enough travel to avoid annoying me – I like a bit of click.

The Gram is also chock full of ports for such a small device. It has an HDMI output, two USB 3.0 ports, a USB 2.0 port, a headphone jack, an ethernet port, and an SD card slot.

One of the common complaints about the Gram series concerns its flexible metal shell. I was prepared to deal with a certain amount of “cheap” based on its lightweight build, but it was for naught. It feels good to me, there’s a definite flexibility there – but as it’s a device I’m constantly grabbing and handling like a tablet, that’s a good thing.

I don’t feel like I’m going to crack something or pop out the screen accidentally when I handle it.

With the Gram, it doesn’t feel like the 13-inch model is just a cheap version of a bigger, better machine. I actually prefer it, for my purposes, because I don’t need another computer to leave on my desk all day. I managed to get about 10 hours of battery life out of it, which was more than enough between charges.

You should consider the smallest LG Gram because it’s a perfectly sized device to set atop your pillow and watch Netflix on, but it’s also powerful enough to take to work. It’s a high-quality machine that looks and feels like a top of the line device.

I highly recommend it for anyone who wants a reliable laptop that travels as easily as a pad of paper.