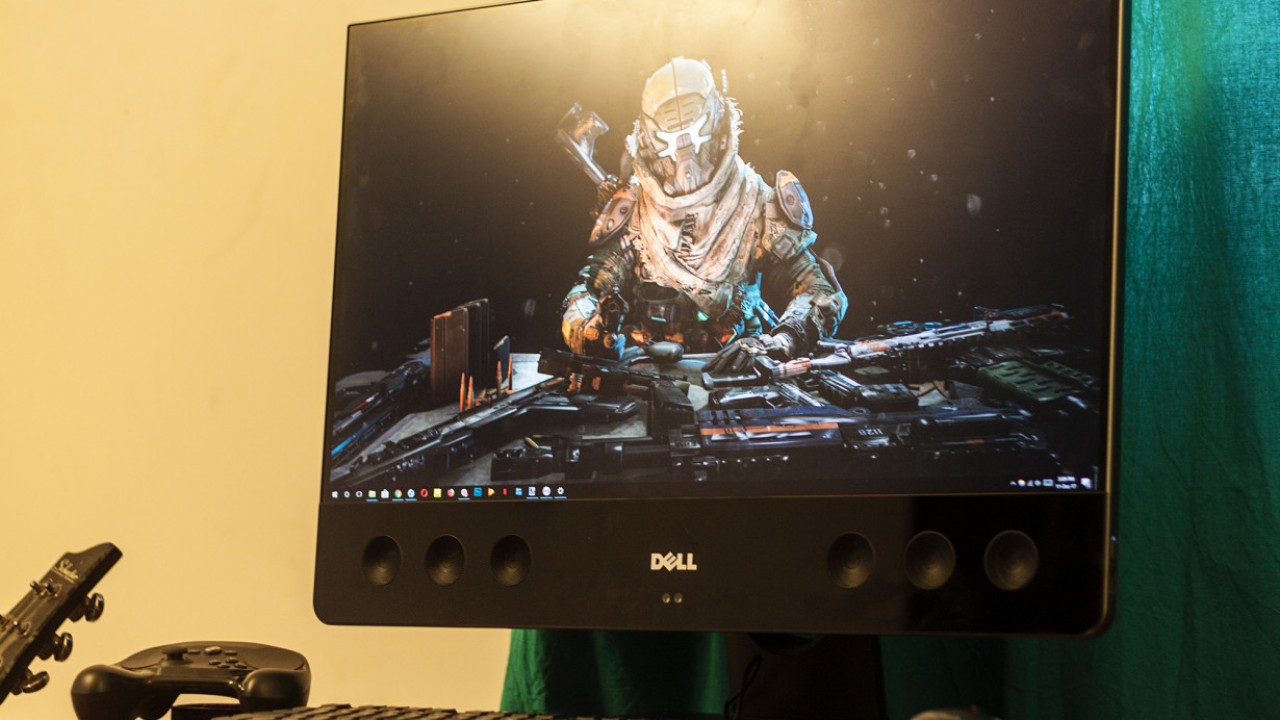 As someone who’s been using laptops exclusively for the past few years, I quite like the idea of an all-in-one PC: like a laptop, everything’s housed in a single unit and ready to go right out of the box.

Dell’s $1,700+ Precision 5720 AIO PC promises to pack enough firepower to handle graphics-intensive tasks into a sleek, iMac-like machine that clears your desk of clutter. Now that it’s available in India, I put it through its paces for a couple of weeks to see if it was all that. Here’s what I learned.

First things first: there are two variants of the Precision 5720: the touchscreen features an articulating stand that lets you fold the display so it’s flat and facing upwards for easier use with a stylus. Dell sent me the non-touch model, whose stand unfortunately doesn’t offer much flexibility beyond adjusting the viewing angle.

The 5720 comes with a 27-inch 4K display, surrounded by fairly slim bezels on three sides, and an array of speakers and a webcam on the bottom. The housing is all aluminum, with black accents on the front fascia and a matte metallic finish around the rest of the system. It’s a pretty machine for sure.

That’s where the fun ends, though. Most of the 5720’s ports are hidden away in a recessed area on the rear panel, just below where the stand connects with the back of the computer. That makes it awfully difficult to plug anything in: I almost couldn’t get my mouse’s tiny USB dongle in there, and I wasn’t sure I’d be able to connect another. It ranks high up there among the worst design flaws in tech I’ve encountered this year.

There’s a USB port on one side, and an SD card slot on the other, along with an audio jack. The cables that plug into the back can be routed through a large porthole in the non-articulating stand. Aside from the problematic placement of the main set of ports, this is a well built computer that’s sure to turn a few heads.

The first thing you’ll notice when you turn on the 5720 is just how beautiful the display is. The 4K screen is pleasantly crisp, with fantastically accurate colors, thanks to its wide 100 percent Adobe RGB gamut. You’ll almost certainly want to scale up the size of onscreen elements for comfortable viewing – and even then, text and icons look fantastic.

There’s a 10-speaker array that aims to negate the need for plugging into an external system, and to Dell’s credit, it does work commendably well. Movies, music, and games all sound great, thanks to plenty of sound separation, clarity, and depth.

Dell only shipped me a standard membrane keyboard to play with, which felt like a bit of a missed opportunity. If you’re going to be spending upwards of $1,500 on a computer, you should really have input devices to complement the experience – a nice mechanical keyboard and a good wireless mouse like Logitech’s m705 would certainly have rounded out this package nicely.

This configuration is fine for casual gaming at HD and Full HD resolution, and for use around the house – browsing the web, watching videos, working with documents and images, and so on. But I certainly wouldn’t recommend this for getting down to serious business, whether that’s working the way I do (40-50 Chrome tabs + Adobe Photoshop + Slack + Google Play Music), or running high-res VR applications.

As I understand it, this is the starting configuration for the 5720, and as such, it simply can’t handle a heavy workload without breaking a sweat. It’s clear to see Dell would do well to either offer more powerful hardware to begin with on this model, or present this rig as a family-friendly setup.

You can upgrade the RAM and hard drive if you like, but ideally, you shouldn’t have to – especially if you’re just using this computer for work. I routinely found the RAM and disk usage bottoming out with my aforementioned combination of apps, and it’d often take up to 30 seconds to just close a tab.

On the other hand, it ran a number of games, including AAA titles from last year, like Batman: Arkham Knight, and Tom Clancy’s The Division, just fine at medium settings. That doesn’t make this the ideal tool for working with high-end 3D or VR applications, but I imagine that better components like a solid state drive and more RAM would certainly help with those functions.

At $1,600 (Rs. 109,000), the starter variant of the 5720 could certainly make a young family happy, with decent gaming and multimedia performance, coupled with a spectacular screen and great sound in a tidy package. I’d still recommend stretching your budget for a bit more RAM, though.

However, if you’re serious about working with high-end graphics applications, you’ll want to look at other configurations of this model, which can cross the $4,000 (Rs. 257,000) mark with faster memory and storage, more powerful graphics and computing processors, and a touch-enabled panel. Just don’t forget to treat yourself to a nice keyboard while you’re at it.

Find the Precision 5720 over on Dell’s site.