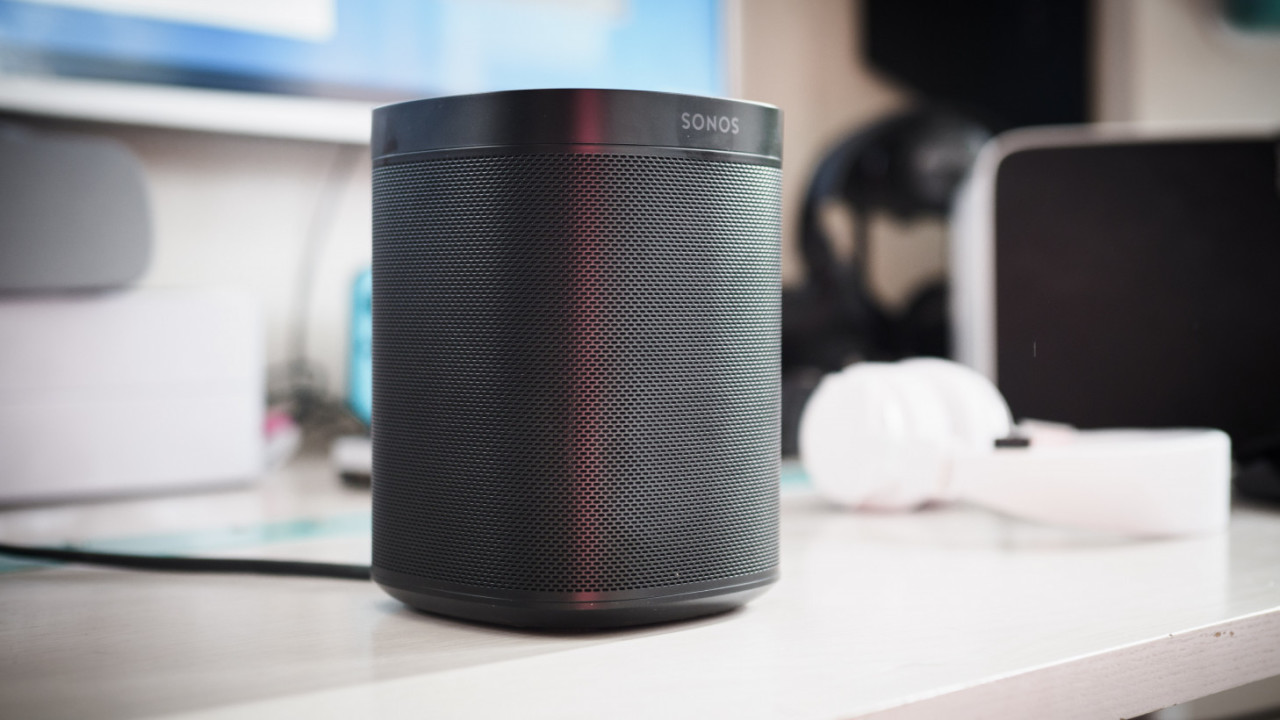 Sonos recently made its first real foray into the world of voice assistants with its new Sonos One, powered initially by Amazon’s Alexa. I’ve been testing one in my home for several weeks, and while it’s clear this is the best-sounding speaker with Alexa built-in right now, it’s real value lies in its potential to incorporate other voice assistants.

First things first: the Sonos One is very similar to its predecessor. While I can’t attest to their relative sound quality as I don’t have the original model with me, suffice to say the Sonos One sounds very good for its size.

Though the One doesn’t really take up much more space than the original Echo – the Sonos is fatter but shorter – sound is in another league. It gets loud, voices and instruments are remarkably clear, and goes surprisingly low for something of its size. Sonos’ awesome TruePlay technology is also built in, allowing the speaker to adjust its sound depending on where you place it. Where most voice-enabled speakers are just ‘good enough’ for casual listening, the Sonos 1 is plain-old good. Of course, that’s also to be expected with a $200 price tag.

The only voice-enabled speaker I’ve heard that approaches the Sonos One sound-wise is Harmon Kardon’s Invoke (also $200). It’s powered by Cortana, but that doesn’t have nearly the widespread support Sonos and Alexa do. Besides, Sonos is upgradeable; the One can also be paired with another for stereo sound and an overall boost in sound quality, although it doesn’t seem you can pair it with an old Play:1 at the moment. And of course, this being Sonos, you can group it with any of the company’s other speakers.

With almost all of the features of an Echo built in, Alexa has never sounded better. Seriously, activating Alexa on the Sonos can almost sound like talking to another person, at least when its voice algorithm manages to not sound too robotic. Sonos also had no trouble listening to my commands, even with music playing.

There are some caveats for now. You can’t play music directly from Spotify, Apple, or Google services yet, limiting you to Amazon Prime Music, Pandora, iHeartRadio, TuneIn, and SiriusXM. Spotify is supposed to be coming in December, but that’s a no go for me, as I use Google Play Music.

However, just to be clear, you can control music with your voice once you start playing it from your phone, regardless of the service. You just can’t say something like ‘Play Thriller on Google Play Music’ and expect anything to happen.

But that might be a temporary problem. The Sonos One’s biggest selling point is a feature that’s not supposed to arrive until 2018: the ability to run multiple voice assistants. At the moment, Google Assistant is the only one confirmed to come beside Alexa, but that addition alone will already be enticing enough for many.

I personally prefer Google Assistant to Alexa. Nothing against Amazon’s work, but there’s no doubt the Assistant is more deeply integrated with Google services and plays more nicely with Android phones. Alexa is better for home automation right now thanks to a wider overall ecosystem, but Google has it beat for actual, well, assisting –  at least if you use Google services. Besides, adding Google Assistant will almost certainly solve my Google Play Music woes.

And therein lies Sonos’ true strength: it’s not forcing you into one ecosystem. If Alexa doesn’t work for you, you’ll one day be able to choose another option. If we’re lucky, Sonos might someday even get Cortana and Siri too. Well, technically it’s already getting Cortana, via Alexa.

As nice as the One is, most existing Sonos users have little reason to spend the $200 to add it to their system. It would be much cheaper to simply get an Echo Dot, which both has a 3.5mm jack and supports Sonos control via an Alexa skill.  But for people who are new to Sonos and are simply looking for great sound quality with some voice assistant chops, look no further. That it’s upgradable by adding other speakers to the system is a neat bonus.

In the meantime, I’ll be eagarly waiting for Google Assistant to arrive next year. Not necessarily because Google is better – again, it depends on what you tend to use voice commands for – but because the Sonos will be One of very few smart speakers that actually gives you a choice.