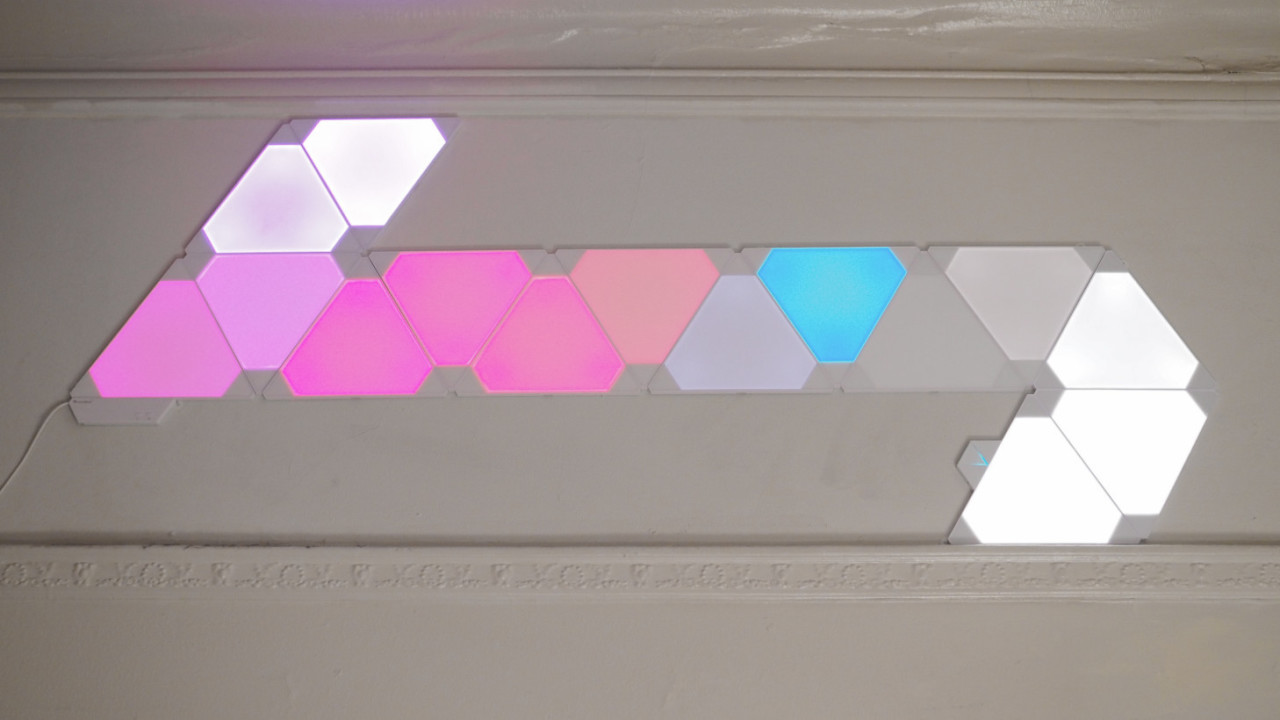 Nanoleaf’s Aurora – a system of triangular LED panels you can connect like Legos – was already one of the coolest lighting systems around. But with a new $65 music module, it just got much more interesting.

I’ve been a big fan of the Aurora since I first reviewed them, so I was pretty excited when Nanoleaf offered me the chance to try its new rhythm module. It’s definitely expensive to get started, if you don’t already have an Aurora system; a set of 9 lights with the module costs $229, and you’ll probably want more lights to get the full effect. But if it’s in your budget, it’s one of the most unique smart lights around.

The module itself is a small bit of plastic that attaches to your existing Aurora and makes it sync up to your music using either an internal microphone or a 3.5mm jack. I used the former.

As soon as you connect the module, Nanoleaf’s app lets you select from any of a few colorful rhythm presets. They’re more than just collections of colors though; each one reacts to music in different ways.

A fireworks setting, for example flashes individual panels with a slow decay that approximates real fireworks suprisingly well. A ripple setting reacts like pebbles in a pond, turning on lights in waves. You can watch Nanoleaf’s demo of the various effects here:

My favorite preset is a Northern Lights setting, because it’s the only one that always keeps the lights on – the lights simply get brighter and change color as music plays. The other styles require you to be playing music or make noise to get any illumination out of it, something which I can’t do 24/7.

Though there are only a few effect patterns, you can create millions of color combinations, and Nanoleaf makes it easy to search for and modify other users’ creations. It’s fun to switch things up, and sometimes I want something a bit more mellow than the rainbow of colors in the default presets.

That said, I do wish Nanoleaf gave tinkerers deeper control over how exactly the lights react to music rather than being limited to a few presets. I would like something like the fireworks preset, for instance, but in a way that the lights were always on even if I’m not playing music. That said, the Aurora supports Alexa, Siri, and the Google Assistant, so its easy to switch to a theme that doesn’t rely on music when you want to.

The module reacts quickly to sounds. There’s a tiny delay if you’re paying attention, but for the most part it’s seamless. Since I’m using the microphone rather than the 3.5mm jack, it’s fun to watch the Aurora react to the random noises in my house throughout the day: my dog barking, the doorbell ringing, my beginner-level piano playing. My girlfriend and I both sing a lot; few things feel as epic as seeing your apartment blaze with light when you hit that high note.

And that’s why the rhythm module has been one of my favorite IoT additions to my home. The Aurora is expensive and won’t fit everyone’s aesthetic, but with the rhythm module it’s gone from a really cool gadget, to something that actually makes my home feel a little more alive. The novelty hasn’t worn off after over a month of messing around with it, and in fact, I find myself playing music out loud much more often because of it. That’s the type of technology I’m all about.