This article was published on November 24, 2016

In this Internet of things era, connected lightbulbs like Phillips’ Hue and Belkin’s Wemo are becoming more commonplace. Unfortunately, for the most part, these still look like plain old light bulbs and LED strips. Can’t we do better?

Enter Nanoleaf’s Aurora. Instead of lightbulbs, the Aurora consists of triangular light panels, which you can stick onto pretty much any flat surface and assemble like a puzzle.

I’ve been trying a twelve-panel Aurora setup for a few weeks, living alongside my current Wemo setup. And while there are a few quirks, I’m convinced its one of the coolest lighting systems out there.

The pieces can be assembled in any pattern, so long as they are adjacent to one another. You can control colors, brightness, and pulse patterns for each individual panel, and – of course – everything is manageable via a mobile Android or iOS app. You even get Siri integration so you can control everything with your voice (Alexa support is on the way).

The design flexibility means setup process is a little daunting, given it has to be put together piece by piece. The panels ship with with double-sided adhesive strips, which come with pull tabs so they can be removed without residue.

For each new piece you add, you insert a little connector tab that transfers a signal from the previous panel. Just be careful; my first piece was a little titled, which meant my entire pattern – a Nanoleaf suggested “cuddly giraffe” – ended up that way. 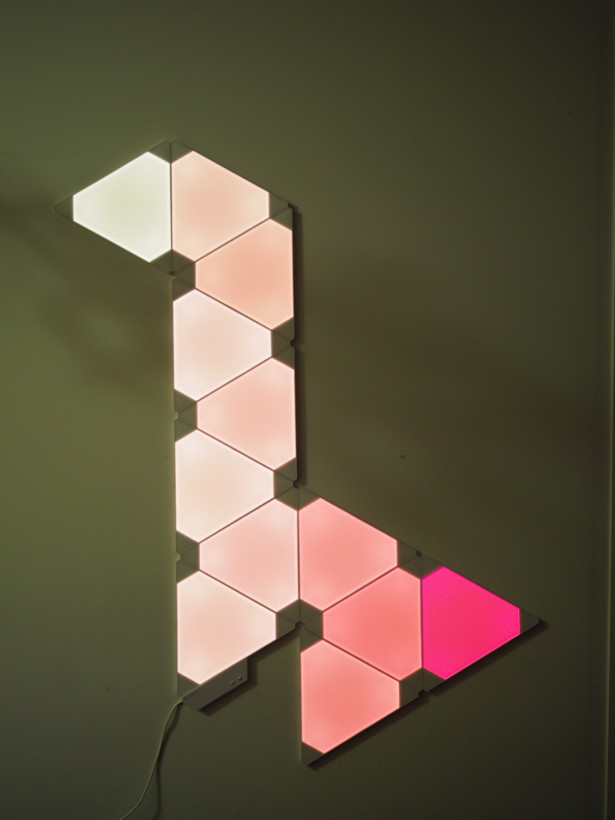 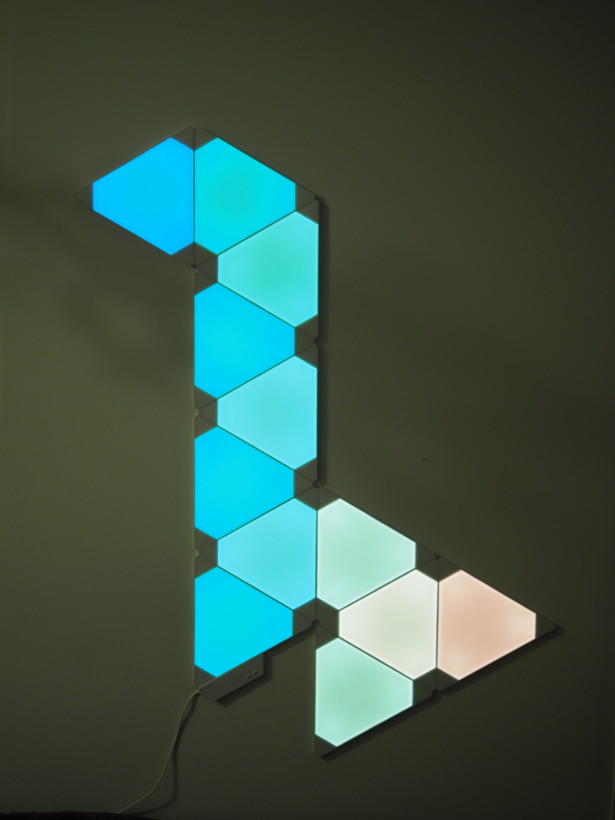 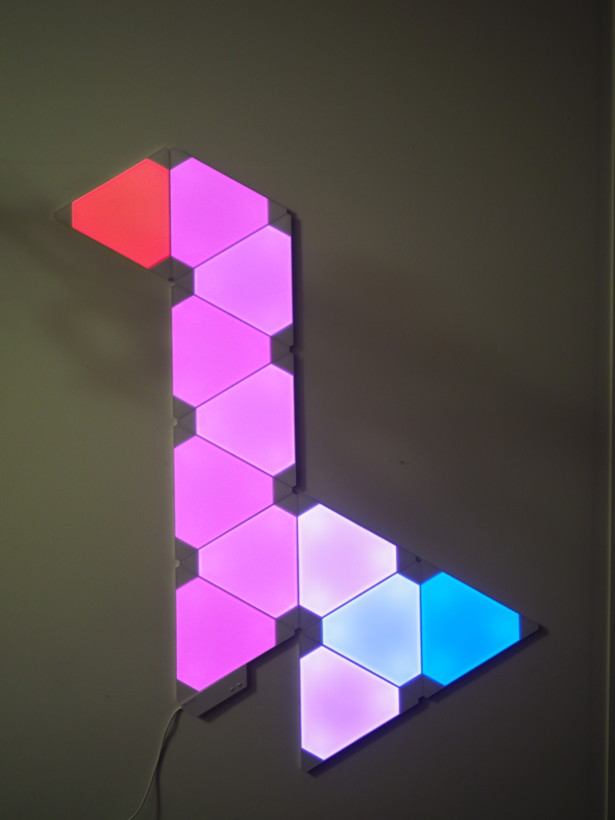 I also had some disappointing issues setting it up on my home network, and couldn’t connect via Android on various devices (I ended up trying with an iOS device, which worked fine). However, the lights also have a hotspot mode that let you bypass your router and connect directly.

With the setup over, the fun begins. The app automatically detects your pattern arrangement (though you might have to fix the orientation), and you’re met with an almost overwhelming amount of options. Just a few things you can do:

I just wish there were a few more presets. Nanoleaf advertises using the Aurora for different moods like ‘relaxed,’ ‘happy,’ or ‘frisky,’ but these are nowhere to be found in app. Better yet, it’d be cool if we could download more presets from the Web to save some time on the process of making your own.

It’s worth noting you don’t even have to use the app. You could just turn it on and off and cycle through the included presets using the two buttons on the controller unit (the little bit with the power cable). Alas, I wish the controller had a another button for adjusting brightness without the app too, as the default setting is much too bright for my tastes.

Speaking of brightness, if you want use the panels as a plain light source, they work very well; the max setting is more than bright enough to illuminate my living room (here’s one YouTuber’s example). This is particularly notable with colors; where many connected lights lose a lot brightness when set to a solid color, the Aurora tends to maintain it.

The lights look classier than I expected, assuming you’re not using a disco-like array of swirling colors colors; illumination is even and there is no light leakage outside their frame. The adjustable colors and even lighting makes me think these would be an interesting choice for a small photography studio too.

My only real illumination nitpick is that if you set the lights to a fairly low brightness, the transitions become less smooth, and more like discrete steps. But the overall effect remains impressive; friends often asked me where I got the lights and how to buy one, though many seemed to assume the lights were touch-enaled (listening, Nanoleaf?).

At $199 for 9 panels and the controller unit, it’s certainly a lot to spend for what are essentially very fancy light bulbs you can only use in one location, but it’s roughly comparable to products from competitors (expansion packs with 3 pieces are $59).

But even then, I mean ‘comparable’ in a basic sense; where most connected lights are meant to hide under a lampshade or kitchen counter, the Nanoleaf Aurora are their own centerpiece. Whether the Aurora’s panels fit in with your home’s particular aesthetics is up to you, but if they do, these is one of the most unique and flexible lighting systems you can get.