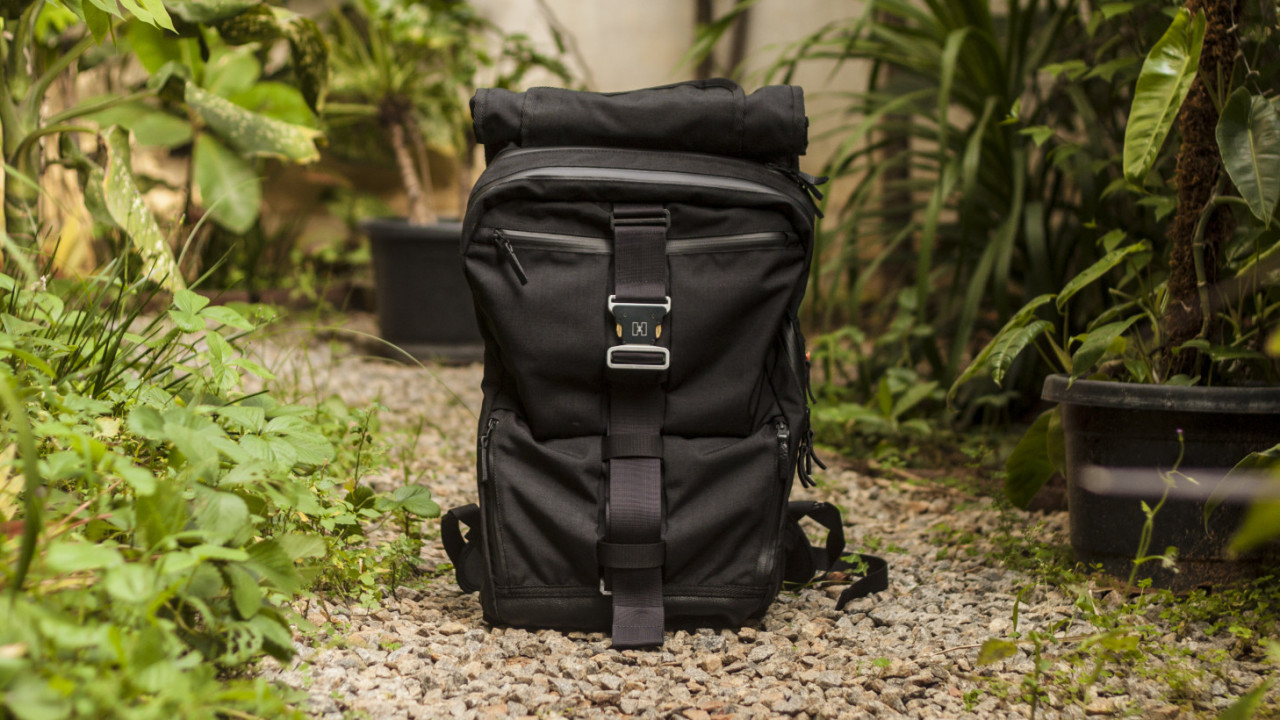 If you’ve got a few hundred dollars to spend on a backpack, there are now plenty of premium options out there to suit a variety of needs and styles. Huru, a new brand that’s making its debut with a Kickstarter campaign, is adding its own creation to the mix, and it’s certainly a compelling one.

Made of cordura and featuring a monochrome look, Huru’s backpack is a discreet 24L bag that can carry plenty of stuff for your daily grind – but it also transforms into a 40L pack for when you want to hit the road. I filled it with essentials for a two-week trip to China to see if it’s worth $300; here’s what I learned.

The all-black Huru is as understated as backpacks get, with hardware and real leather accents to match the cordura. The only hint of color you’ll see is the brass tint on the fasteners that adorn the front of the pack and the straps.

That means it’s not quite as pretty or luxurious as some of the other bags in this price range, but if you’re all about stealthy streetwear style, this is right up your alley.

The Huru is quintessentially practical, with a slim profile to meet airlines’ cabin baggage conditions, and plenty of easily accessible pockets to stash your things.

Let’s start with the basics: there’s a large central compartment that you can open like a suitcase, as well as a protected section within for documents. On the front are two pockets, the one up top (near the buckle) being large enough to store plenty of tech accessories like travel adaptors, battery packs and external hard drives; the lower pocket is slimmer and can hold things like a notepad and boarding passes.

From the side, you can access a heat insulated pocket for a 600ml bottle, as well as a padded laptop compartment towards the back that fits a 15.6″ notebook – but just barely.

This shouldn’t be a problem for most folks who use slim work laptops or MacBooks, but you won’t be able to cram a thick gaming laptop in there. I also frequently had trouble getting my 15-inch Dell Inspiron 7548 in and out of there at airport security checks, which meant that I’d always have to take my backpack off to the side to repack.

Okay, I’m done whining, and there’s more good stuff yet. There are two ways to expand the Huru: by unrolling the velcro-fastened top compartment to store a tennis racquet, a tube for prints or a skateboard, and by opening up the central compartment that has a second zipper at the back.

While the top pocket is tall enough to stash the aforementioned items, it may not be easy to do so with a laptop in tow, since you need a little wiggle room for your gear and there’s not much give in the front.

When you expand the central compartment, you can comfortably pack enough clothes for a few days’ worth of travel or camping. That’s basically what makes the Huru worth considering; with my smaller inexpensive everyday backpack, I can hardly fit a single change of clothes with my laptop before it begins to fill up.

Huru’s pulled off a nifty trick with the waist belt that’s usually used for adding support for heavy loads: it’s actually a detachable pack that you can slip out from the back panel and wear as a sling bag or fanny pack.

It’s not just a gimmick: I usually travel with a slim sling bag I received as a freebie, but this can hold plenty more stuff, including a Costanza wallet, a couple of juice boxes, a passport, rolled up bank notes and boarding passes. There are even two additional zippered pockets for smaller items like keys and lighters.

On previous trips, I’ve carried a small backpack, a suitcase and a lightweight messenger bag that’s easily folded and stashed away for when I want to head out on a day trip and need to carry clothes.

The Huru served me well as a laptop bag for when I headed into the coworking space in town, while also holding my DSLR pack that holds a camera and a couple of lenses – with room to spare. At the same time, it didn’t look like a bag that was too bulky for use in the city.

On my trip, it worked great for when I wanted to carry a change of clothes, a bunch of tech gear and my camera through multiple airports and on day trips. And because it expanded easily, I could shop for clothes I couldn’t find back home and fit them without weighing down my suitcase.

It’s worth noting that the Huru weighs 2.5 kg on its own; however, thanks to its construction and the well padded back panel and shoulder straps, you don’t feel like you’re carrying much. Heck, if you’ve just got a laptop in there, it feels like nothing at all.

The cordura easily stood up to the drizzles I encountered on two separate days, and I was glad I didn’t have to worry about my gadgets and laptop getting wet. For the most part, raindrops simply rolled off the pack and didn’t soak the fabric.

There are plenty of smart details that I came to appreciate over the past couple of weeks, like the ability to adjust the length of the shoulder straps on-the-fly, the water-sealed zippers, the abundance of pockets on the fanny pack and shoulder straps, and the rain poncho that hides away in its own pocket until you need it to cover your head and shoulders.

The detachable sling bag came in handy every time I had to travel and keep my passport and currency at the ready. By throwing this in, Huru saves you at least $20 you’d spend on a standalone sling bag. Plus, this one is just as water resistant as the main bag and can turn into a support belt for the backpack when you don’t need it.

Should you buy the Huru backpack?

First things first: this is a crowdfunded product, so keep that in mind when considering the Huru. That said, the company did manage to ship me a sample unit ahead of its Kickstarter campaign and my package arrived in well under a week.

There’s plenty to love about the Huru backpack: it’s extremely well crafted, thoughtfully appointed and delivers on its promises of versatility, water resistance and being able to hold plenty of stuff.

Now, Huru plans to charge $300 for this backpack after the campaign, which means it’ll cost about as much as premium offerings from Peak Design and Waterfield. If you’re a photographer or want something that looks more like a traditional backpack, those options might appeal more to you.

However, if you like the look of the Huru, you won’t be disappointed by the quality and functionality that it offers. The company says it’ll now include an organizer pocket for small items since it’s crossed its first funding goal, and the pack is presently much cheaper than its sticker price. At this point, it’s certainly worth considering.

Find the Huru backpack over on Kickstarter; the bag will begin shipping in February 2018.