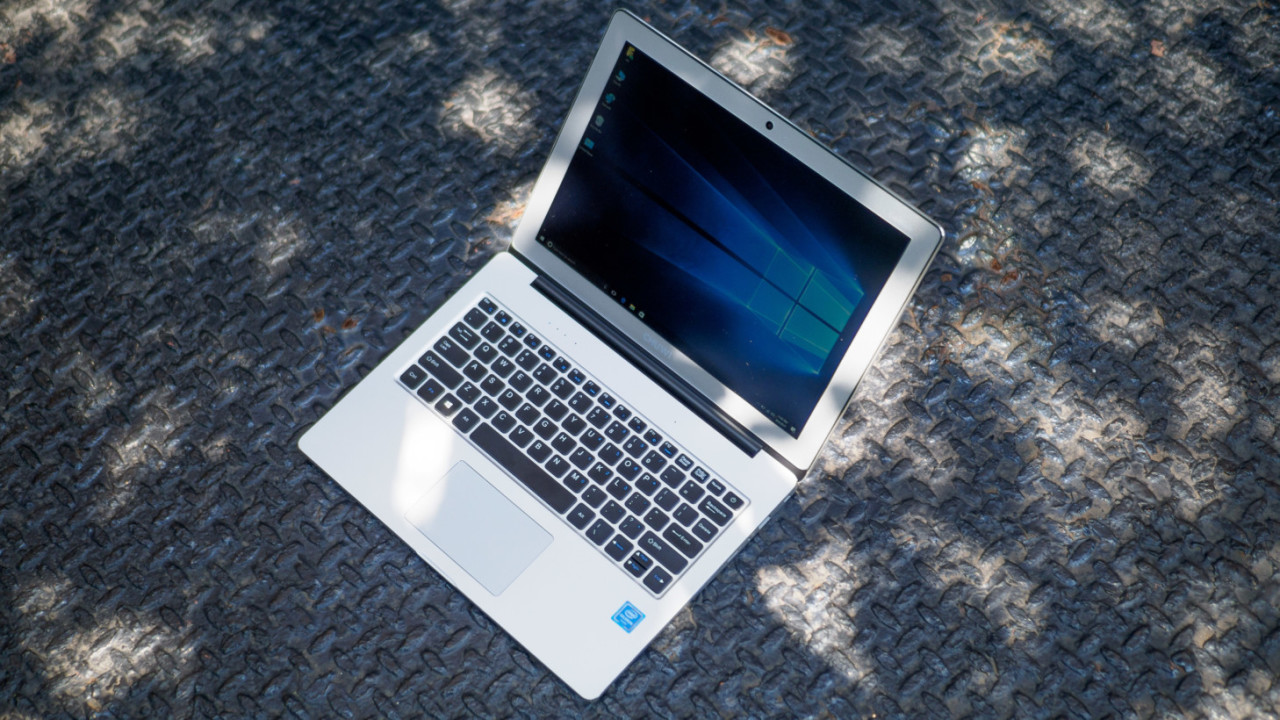 What if you could get a MacBook Air for a little over $300? That’s essentially the value proposed by Chuwi’s LapBook 12.3, with some obvious but very reasonable compromises.

Chuwi isn’t exactly a household name, but the company has gained some attention recently for its budget computers – low on processing power, which is no surprise, but with surprisingly good build quality. Most of these have been Surface clones thus far, but the LapBook 12.3 is aimed firmly at the ultrabook market.

Specs are mostly typical for the price range, with some very important exceptions. The laptop is powered by by a 7th Gen Celeron N3450, but comes with 6GB of RAM instead of the usual 4. It includes 64 GB of eMMC storage but comes with a MicroSD slot and an easily accessible M.2 slot. It has a decent 2MP front-facing camera, Two USB ports (one 3.0), and a Mini HDMI port as well.

But the star of the show is the display. It’s good – really good.

It’s a 12.3-inch IPS panel, with a 2736 x 1824 (3:2) resolution. It’s rated at 450 nits of brightness, and according to Windows Central, has 99 percent sRGB coverage. Other than the matte finish and lack of touch compatibility, the display’s specs are virtually identical to the Surface Pro, suggesting Chuwi is sourcing the same parts. Looking at the screens side-by-side, I have no doubts – and some might even prefer the matte, reflection-killing panel on the Chuwi.

At this price point, that’s incredibly impressive; it’s not just the best display I’ve used at this price, it’s one of the best I’ve used on any laptop. The screen quality almost justifies the price on its own. The MacBook Air’s aging 1,440 x 900 display doesn’t even stand a chance.

But then the rest of the hardware is pretty impressive too. The laptop uses a unibody aluminium construction and weighs three pounds. It feels solid throughout, and the hinge can be opened smoothly with one hand. The keyboard has somewhat oddly shaped keys and there’s no backlighting, but I got used to them quickly thanks to excellent travel and responsiveness. There’s no flex on it at all.

The laptop doesn’t necessarily stand-out in a sea of MacBook clones, but it’s remarkable that it could almost be mistaken for something much more expensive. Fit and finish isn’t quite as polished as some of the better laptops out there, but my only real complaint about the design are the giant bezels. Still, they’re about the same size as the MacBook Air and house an infinitely better display.

Using it for work is pleasant, as long as you keep your expectations in check given the specs. This is a laptop that will work completely acceptably for everyday computing tasks like web browsing, working on documents and spreadsheets, and even some light Photoshop work. The 6GB of RAM helps it handle a few more tabs than most other laptops in its price range, and I’ll take the extra RAM over a more powerful processor. Bonus: there’s no bloatware to be found either.

The only thing that kind of sucks is the trackpad. It’s a bit on the smaller side, but the biggest issue is that scrolling kind of sucks. The action isn’t particularly smooth, and it’s backwards; think of an old-school Windows laptop, where moving your fingers up also moved the screen up. Almost every modern laptop works the other way around.

It seems like it’s a case of bad drivers more than bad hardware. The trackpad supports multi-finger gestures and otherwise works smoothly – scrolling is the only problem. I got used to it quickly enough, but it’s not an ideal experience – and it might be the deal breaker for those who are very picky about their trackpads. Here’s hoping a driver update fixes the issue, but for now you might want to keep a portable mouse around.

Regarding battery life, the bad news is that it’s rated at just about 6 hours. The good news is that that estimate is actually accurate for a change. Intense activity at full brightness (there’s no automatic brightness setting) can drain the battery in about 4 hours, but 6 hours was right around my regular usage. A bit less than some of the competition, but more than I often achieved with the Razer Blade Stealth.

Look hard enough and you might be able to find equally powerful laptops at similar prices, but I’ve yet to see anything with comparable build quality or so fantastic a display. If you have a small budget and care about a great display and build quality, the Chuwi is almost a no-brainer. Though I’ve seen the LapBook 12.3 go for as ‘high’ as $350, it’s currently selling for $300. Nearly a month after I started testing it, I’m still baffled that it’s as cheap as it is.