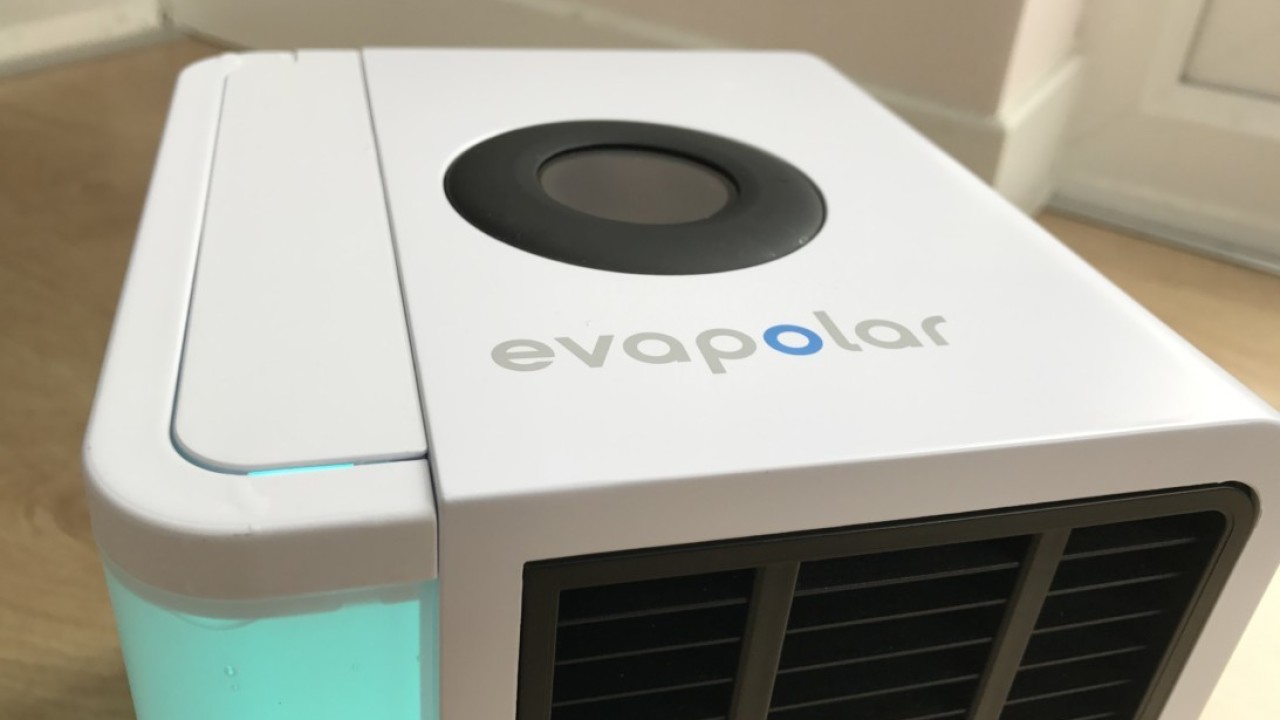 It’s estimated that there are over 1.5 million people who work from home in the UK. I’m one of them. The last time I worked in a formal office was an internship I did during the first year of my undergraduate degree, and while I’m not about to say ‘never again,’ I do enjoy the fact that I don’t have to deal with commutes, traffic, and brown-bag lunches.

That said, there’s an argument in favor of the traditional office that says it’s a much more comfortable environment, what with its ergonomic chairs and ubiquitous air conditioning. There are things you can do to bring your home office to a similar standard. One gadget I’ve spent the past few weeks playing with is the Evapolar. This little gadget is a near-perfect cube, resembling slightly the Companion Cube from Portal.

Evapolar, which just launched in the UK, does three distinct things. Firstly, (and obviously) it cools the room to a lower-level of 17 degrees Celsius (63 degrees Fahrenheit). Personally speaking, this is the ideal temperature for me, where I’m not too cold, and not too hot. The manufacturer says that the device creates a ‘microclimate.’ Although that just feels like a glorified way of describing the basic function of an air conditioner, it actually means that it only cools a small area, e.g. your workspace. This is handy if you work from a shared environment, like a living room or a co-working space, and you don’t want to disturb your neighbors.

It’s worth noting that the device works best in dry environments. If you live somewhere high humidity (over 70-percent), the Evapolar will be less effective at cooling you down.

That’s because the Evapolar is also a humidifier, which the company says improves the air quality, making it easier to breathe. The final piece in the hat-trick is that it purifies the air in the room, removing dust and other pollutants. This is huge if you suffer from allergies.

I’ve been using the Evapolar in two different environments. The first is my bedroom office, which measures about 2 meters by 2.5 meters. The other is in my conservatory, which is a little bit larger, but as a glass room in the height of summer, it’s also significantly hotter, often reaching as high as 35 degrees Celsius (95 degrees Fahrenheit).

In both environments, the device made a measurable change in my work space. In the midst of summer, I felt more comfortable. Adjusting the temperature is just a matter of pressing a touch-sensitive display, or moving an iPod Classic-like scroll-wheel until you hit your sweet-spot.

Admittedly, I’m lazy, and I sorely wished I could control it from my iPhone. Or better yet, have the device to learn from my behaviors, much like a Nest thermostat does.

That said, the company just concluded a crowd-funding campaign for a new version, called the Evapolar 2. This will come with support for Amazon Alexa, Apple HomeKit, Google Home, and Samsung Smart Things.

Anyway, I digress. When I used it in my bedroom, I felt compelled to leave a window or door open. That’s because high levels of humidity in an enclosed environment is a recipe for mold, which, it goes without saying, can be really hazardous to your health and introduce all sorts of nasty respiratory problems.

It measures roughly the same as two GameCube consoles stacked on top of each other, and when you fill its 750ml water tank, it weighs roughly 2 kilograms. This makes it pretty portable, although I found that when moving the device, you had to walk with it pretty carefully, lest you spill water everywhere.

According to the manufacturer, the Evapolar produces between 28 to 40 decibels of noise. The harder you make it work, the more noisy it’ll be. Although I found that, in practice, it wasn’t too loud. It was audible, sure, but it just felt like white background noise. The type of noise people actually download apps in order to hear.

Unlike pretty much every air conditioner I’ve seen (although, I don’t pretend to be a connoisseur, if there are such things), the device charges over a bog-standard MicroUSB connection.

My review unit came with a European USB adapter, although I was able to throw that away, and connect it to an Anker wall charger I’d bought earlier. You can also order the device with UK, US, and Australian plugs.

Out of curiosity, I was curious to see if it’d work with a portable battery pack. I plugged it into a cheap, 20,000mAh Anker model, and the device began to whir contentedly. This makes it an ideal companion for camping, or whenever you take the RV out on the road.

It should last long, too, as the Evapolar consumes just 10w of power. This puts it on par with a bog-standard tablet computer or table fan. Given that most air conditioning units are pretty expensive to run, this is hugely welcome.

But these savings are eroded by the fact that it uses a cartridge which has to be replaced every six months, or so. You can order these easily online for $39.99, and the device comes with one already included.

So, let’s wrap things up. The Evapolar is a gorgeous piece of kit. It looks decidedly premium, and it’s pretty economical to run. It did a good job of cooling me down, especially in the midst of a serious British heat wave, whilst also remaining pretty quiet.

The biggest downside is, inevitably, the cost. The base unit will set you back nearly $180. Additional cartridges cost $40 a pop, making it a product for those with pretty deep pockets. There are other, cheaper cooling options around. Previously, I had a bargain-basement USB-fan from Amazon cluttering my desk, which cost about $20. This did an equally adequate job of cooling my workspace, although admittedly, it was much louder.

Punters eying Evapolar will have to decide if the air purifier, the humidifier, and the fact that you’re able to precisely control the temperature is worth the extra $160 it demands. If you’re convinced, you can pick one up here.