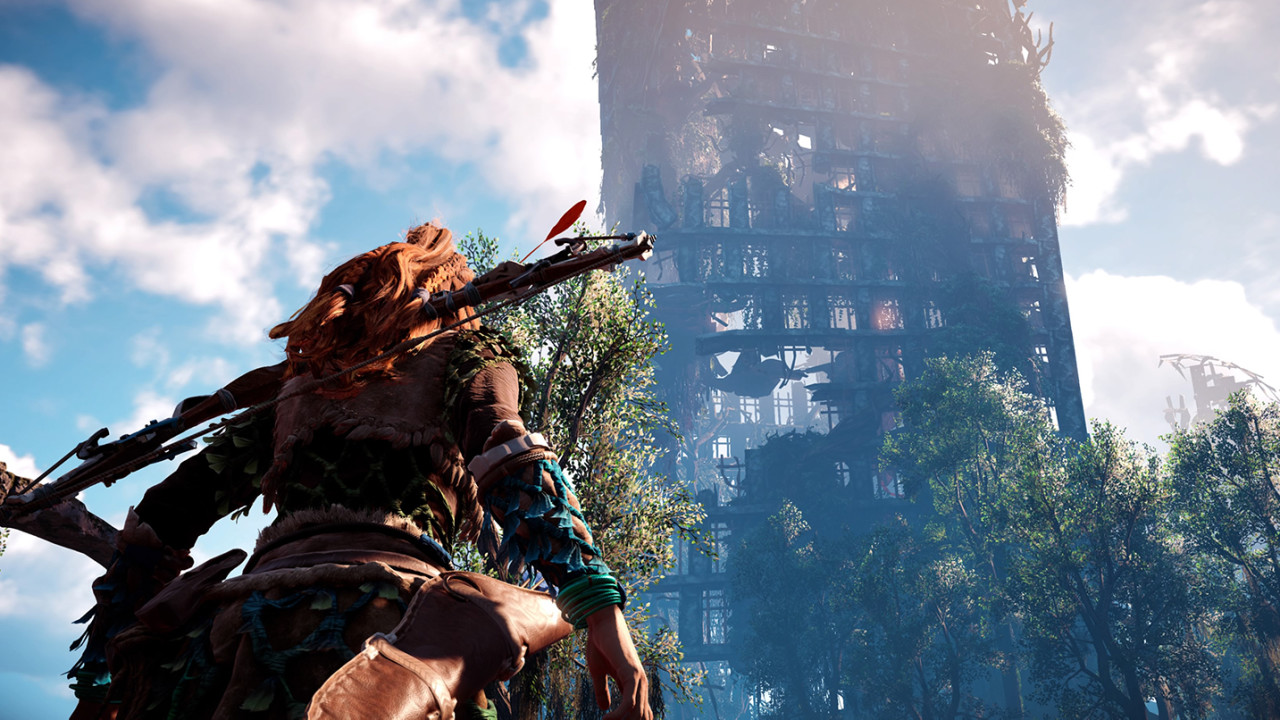 Horse-like and nimble, our Strider is a capable means of transportation. Once a foe, our protagonist, Aloy, has since “corrupted” the beast to serve as her trusty steed.

With a tug on the reins, the machine dutifully trudges forward toward the city of Mother’s Heart.

Clad only in animal skin and carrying a bow, Aloy approaches the city. Protected by a log fence, inside is an entire village of thatch-roofed structures housing members of the Nora tribe. They look a lot like our main character — save the red hair and “focus” resting in her right ear.

The “focus” is a futuristic-looking tool meant to scan the world and assist Aloy. It’s a relic, a technological artifact that serves as a reminder of the advanced society now long gone.

The scene is a paradox, and Horizon Zero Dawn is full of them.

Set in a magnificent post-apocalyptic future, Horizon blends the future and the past with splendor. Primitive settlements litter the map, their inhabitants the perfect juxtaposition of old and new. Some are friendly, others aren’t, but each has a common fear: the beasts outside the walls.

The beasts are remnants of a technologically-evolved society that once was. That world is now gone. In its place are ruins of once majestic cities, primitive tribes and villages, and wilderness — lots of wilderness.

Horizon opens on Rost, a burly man in fur with a braided beard and kind eyes. As opening credits roll, he plods along the hillside, each labored step bringing him a step closer to the sacred blessing awaiting him at the top. As snow falls, and Rost climbs, he explains to baby Aloy that the two are outcasts of the Nora tribe, a society Rost still yearns to be a part of.

Rost isn’t Aloy’s father, but it’s clear from the onset that protecting her is his primary objective.

Unfortunately, he never tells us why the two were cast out, how he came to be Aloy’s guardian, or where her parents are. This is just the first of many mysteries you’ll encounter. It also serves as the introduction to the central theme of the story: motherhood.

Praise be to All-Mother

Saying the matriarchal Nora place women on a pedestal is an understatement. Every position of power within the tribe — from war chief to village elder — belongs to a woman. Hell, they even worship a woman, the all-powerful deity, “All Mother.”

In case you forget, village names like “Mother’s Cradle” and “Mother’s Heart” are everywhere. They’ll be sure to remind you.

In a tribe of strong women, it’s clear early on that Aloy might be the strongest. She’s a mystery, but the storyline points to her being important, while doing a great job of masking why.

This is just one of many mysteries you’ll wrestle with early in the game. Luckily, you’ll get answers as you go. Most of the answers, though, just lead to more questions.

Aloy was a rolling stone

Something not immediately apparent in Horizon is scale. Starting out, you’ll wander a small area while you’re guided from one mission to the next, mixing in the occasional side quest. The world is open, but you’re gently nudged in the right direction throughout.

At no time did I question what I needed to do next.

As you advance, missions take you further from home. This forces you to appreciate the size and diversity of the world around you. Grassy plains sway in the wind before giving way to snow-capped mountains; mountains dip into fast-moving streams; streams cut through lush forest; and all the while you’re left to marvel at both the stunning level of detail, and the dynamic nature of it all.

As a hunter/gatherer, Aloy spends a lot of time doing both.

Machines, the leftover fauna from days long past, offer the most common enemy. Each machine resembles an animal — like the tiger-esque Sawtooth — both in looks and behavior. Gone, though, are flesh and bone, both replaced with hardened metal and a handful of spare parts to forage.

Hunting isn’t optional. The main missions and side quests require Aloy to put her skills to the test. Combat, unfortunately, is where Horizon’s glitter starts to fade. Melee combat struggles under a wonky camera system. Charging enemies cause a shift in the camera that leaves you blind momentarily. It’s annoying, but not a deal-breaker.

The battle animations are great, although few in number. Even the early amusement that comes with driving a spear through the midsection of a Watcher quickly loses its luster as the game wears on. Luckily, killing isn’t the only option; you can always tame the beast.

Early on, Aloy learns to corrupt machines to serve her. Be warned, it works both ways. You’ll be fighting these corrupted machines as well.

Foraging isn’t limited to machines, either. Flora collected along the way serve to heal and aid in crafting. It’ll get a little redundant, but collecting these items is necessary for survival in Horizon.

Ambition on this level has only two outcomes: awards (Grand Theft Auto V), or pissed-off gamers (No Man’s Sky).

Guerilla Games is in no danger of being lumped in with the latter. From the moment you start the game you’re hooked. The environment is alive; the characters rich and dynamic, and the storyline doesn’t take a backseat like in the games it’s most easily compared to: Skyrim and Dragon Age.

Between the new Decima engine and Guerilla’s eye for detail, there’s a lot to be enthusiastic about.

Seemingly-simple things like the way mouths come close to mirroring real movement during speech, or the way a young Aloy bounds around the environment with an endearing child-like gait really allow you to lose yourself in the moment. These examples are subtle, but Horizon owes its excellence to exactly this: a lot of subtle things executed to perfection.

If there’s a more obvious path to a Game of the Year award, I haven’t seen it.

Sony, for its part seems to have found the successor to Uncharted. After saying goodbye to Nathan Drake, the company is in obvious need of a stellar first-party title worthy of being its successor. If Horizon isn’t it, I’m dying to see what is.