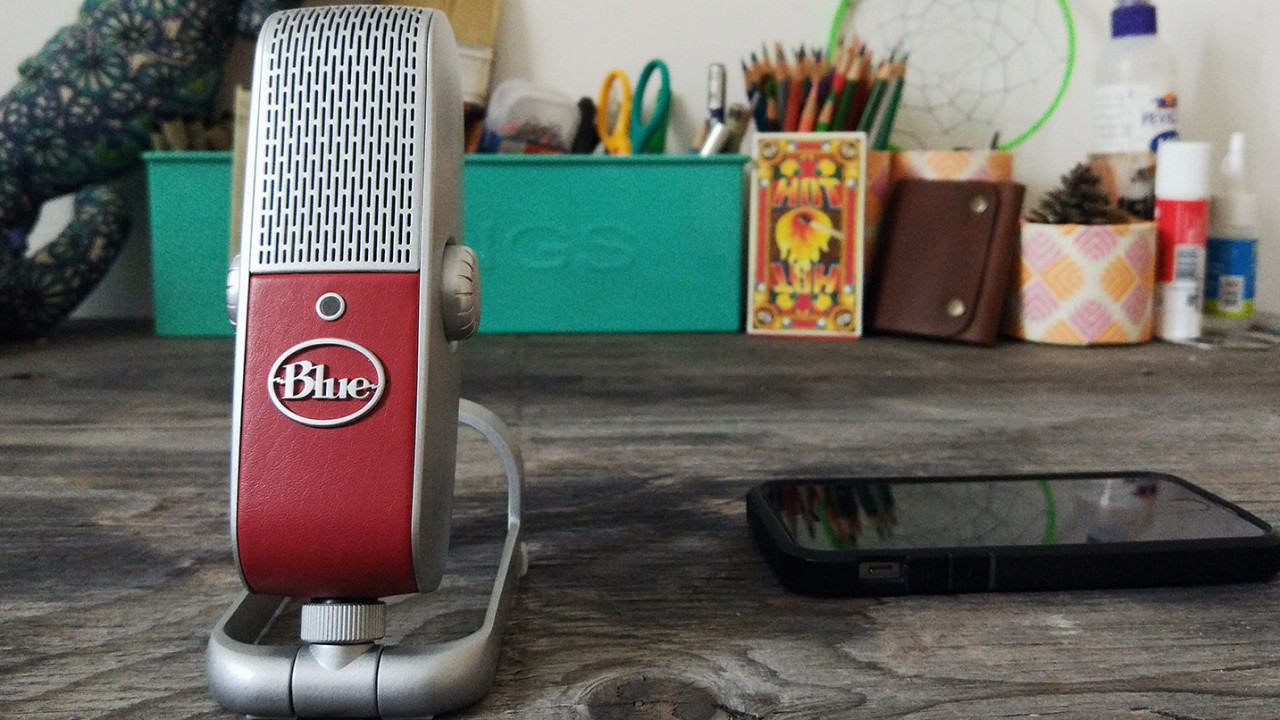 I’ve been working on developing my own podcast lately (still very much in the works) and have been in need of something to carry with me so I can record high-quality audio on the go.

That’s why I was glad to receive Blue’s new Raspberry portable mic in the mail. It promises professional results even with its diminutive form factor. It’s designed to work with PC, Mac and iOS devices – it also reportedly works with certain OTG-enabled Android phones. I put it through its paces over the past couple of weeks to see if it lived up to the hype.

The Raspberry about the same height as an iPhone 5s, but it’s a lot thicker and weighs a bit more at 167g. It comes with a collapsible stand that lets you set the mic upright or at an angle on a flat surface, as well as a 1/4-inch thread mount adaptor to use it with a standard camera tripod.

The pill-shaped device is as well built as it is handsome: A dash of red leather with the Blue logo on top adds a touch of class, while the mic grille, which curves gently around the top and extends to the back, gives it a neat retro-modern look.

You’ll find knobs on either side of the Raspberry to adjust the mic gain and the headphone output volume; there’s a microUSB port and a 3.5mm headphone jack on the back. A status light above the front logo tells you when the mic is on (glows green) or muted (glows red). It comes with microUSB-Lightning and microUSB-USB cables for use with iOS devices and desktops respectively.

Overall, the Raspberry is beautifully designed and well thought-out: It folds easily into a compact package that goes into a nice pouch (included) and is equipped for use in a variety of scenarios, from recording a single speaker’s voice on a tabletop to being mounted on a tripod for video.

What I love about the Raspberry is how simple it is to use: simply plug it into your iOS device, fire up an app that supports external mics (like GarageBand, Opinion Podcasts or Spire Recorder) and you’re off to the races.

It works equally well on PC. I only needed to plug it in and select it as my recording device, and it was ready to use with my DAW (Reaper is my weapon of choice).

The Raspberry manages 16- to 24-bit audio at a sampling rate of 48KHz. Once you’ve set up the mic, you can adjust the gain and headphone volume to suit your preferences and environment; pressing the gain knob mutes the mic instantly.

Android Police reported that the Raspberry worked with certain OTG-capable Android devices from Samsung; unfortunately, I didn’t have any luck with this using the Xiaomi phones I had on hand, and I guess the lack of ubiquitous external device support on Android is the reason why Blue didn’t mention compatibility on this platform.

With the Raspberry, Blue has proven that you don’t need a huge mic to capture great sound. I recorded myself reading a recent TNW article in my home office with the built-in mic on my Xiaomi In-Ear Headphones Pro, as well as Blue’s older tabletop model, the $129 Yeti and the Raspberry. You can hear the samples below.

The Yeti and Raspberry are pretty close in terms of audio quality and blow the Xiaomi in-ear headphone mic out of the water. But what’s remarkable is that the Raspberry achieves this level of detail, clarity and depth with such a small, portable form factor.

It did a great job capturing my acoustic guitar as well. The sound was rich and individual notes were crisply articulated.

The device also managed commendable results when used with an iPhone in spaces that were relatively quiet, save for some ambient noise. Blue promised that the Raspberry would be able to minimize room sound thanks to an internal acoustic diffuser, whose design draws from sound treatments in studios and concert halls, and it certainly delivered on that front, cutting out the hum of a refrigerator and an air purifier rather effectively.

Given how easy the Raspberry is to use and how little space it takes up on my desk, I can see it replacing my trusty Yeti for podcasting duties. Granted, the larger device does offer more flexibility with its range of recording patterns for activities like two-person interviews, but if I’m by myself, the Raspberry is all I need.

That said, it is a bit pricier at $200 (£170 in the UK) – but for the added price, you get the freedom to carry your mic with you and not have to worry about scrimping on audio quality. Whether you record often or are just getting started, this is a great tool to add to your arsenal.

The Blue Raspberry is available from the company’s site as well as from Amazon for customers in the US, and should arrive on Amazon UK as well as Maplin this month.