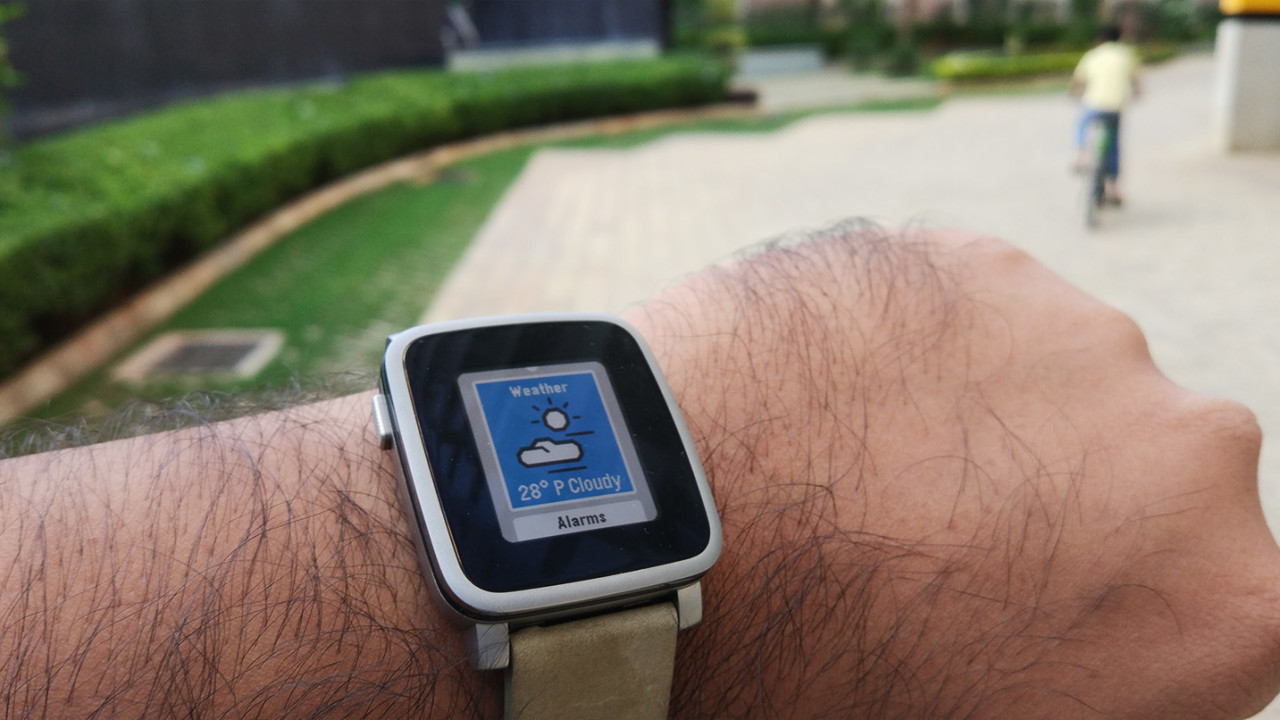 I’ve worn watches practically every single day for the past two decades, and over the past couple of years, I’ve been learning more about the world of timepieces and horology. It’s fascinating, to say the least, and it’s a rather expensive hobby.

I’ve slowly amassed a small, humble collection of watches in that same period. They aren’t expensive by any measure, but they’ve become prized possessions that I cherish deeply. Some are particularly special, like the one I bought to commemorate my first job; others complement my sense of style or are suitable for certain special occasions; there are also a couple of late-night impulse buys in my watch case.

While traditional watches are a lot of fun to shop for and wear, I wasn’t sure about whether I’d care to own a smartwatch. I’ve written a fair bit about them, but hadn’t had one on my wrist for more than a few minutes at stores and demos. That’s why I was thrilled when Pebble’s PR team in India phoned to ask if I’d care to try out a Pebble Time Steel for a few weeks.

Of course, the first generation of Pebble’s smartwatches have been available for some time now, and the next bunch are slated to arrive in November. So, rather than re-review the Time Steel, I thought it might be fun to share my perspective on smartwatches – you know, what with me being a cash-strapped watch aficionado and all.

I’m fascinated by watchmaking because it brings together numerous disciplines like product design, fashion, typography, and high-precision craftsmanship. There’s a lot of that in smartwatches too, along with things like an intuitive interface, wireless technologies and a customizable setup to suit each wearer’s needs.

I’m generally interested in utility or tool watches, which serve a specific purpose and include features to suit certain activities. For example, divers’ watches are designed to work at great depths in the ocean with high water resistance. They also feature luminous hands and hour markers so you can read the time in the dark, include bezels that can be rotated to tell you roughly how much time you have left before your oxygen tank runs out, and occasionally include rubber straps that can extend to accommodate wetsuit sleeves.

In addition, various brands and styles have plenty of history that you can delve into – from the development of their complex movements to their roles as essential equipment for military operations, as well as space and underwater expeditions.

Of course, not everyone’s concerned about stuff like that. Some people just want a good-looking fashion accessory; others want a high-tech gadget that can reduce the need to check their phones for notifications and to free them to engage more naturally with the world.

To that end, smartwatches attempt to pack a great deal of functionality in a small package. They can do everything from mirror notifications, allow you to respond to email and messages, guide you to your destination with a map, and even hail an Uber. It’s kind of awesome to think how many technological innovations that came together to make this happen – Bluetooth, mobile connectivity, e-paper display, and cloud-based voice recognition, to name just a few.

In addition to doing all this, the Pebble puts my information in order with a timeline that updates itself based on my calendar and alarms. Another approach can be seen in Google Now on Android Wear, which brings contextual information to your watch screen.

So, yes, smartwatches are certainly marvelous and will astound even the most cynical tech enthusiast who hasn’t yet tried one, with just a few minutes of fiddling with it. But what about watch nerds?

It seems as though the first generation of smartwatches that are currently doing the rounds are selling people mostly on their technical capabilities.

There’s no story behind the designs of these smartwatches; instead, brands are under pressure to come up with something that appeals to as wide an audience as possible and can be manufactured cheaply and efficiently.

For avid watch enthusiasts, that means that their shopping experience – which involves learning about the legacy of the brand, the timepiece and the master craftsmen behind it – is whittled down to a spreadsheet comparing specifications and prices of competing smartwatches.

At the same time, smartwatches presently suffer from issues that are common to the first wave of most categories of gadgets: poor battery life, dependence on proprietary chargers and planned obsolescence (these devices will have to be phased out to make way for the next generation in a year or two).

There’s also the question of the identity of a watch. There are numerous watches that feature timeless designs that are regarded as classics and appeal to several generations of watch collectors; a lot of that has to do with their design, and in some cases, their place in history – the Omega Speedmaster, which was the first watch worn on the moon, is an oft-cited example.

In contrast, smartwatches are designed to conform to the wearer’s preferences; you can switch digital watchfaces on their screens and swap out complications to suit your needs. That’s certainly useful, but it makes smartwatches less memorable.

I’m also not entirely sold on the argument that smartwatches can help you be more discreet when out in public. I get about 50 emails a day on average, which means my watch buzzes at least that often – not counting texts and alerts from other apps. And just because i don’t have to whip out my phone to respond to them, doesn’t mean they don’t distract me to a similar degree. I still need to glance at my watch, read messages on a small screen and act on them with as much concentration as I’d need when using a phone.

However, I do appreciate that smartwatches essentially negate the need for a separate fitness tracking device. It’s nice that most of them can  tracks your steps, distance and calories burned while you’re out on a run. Owen Williams made some excellent points in his article about this, where he talked about how his Apple Watch got him to run daily and lose weight.

But does this make a great case for a smartwatch, or does it make a good case for something like the upcoming Chronos attachment for traditional watches? The $100 device is only 3mm thick and attaches to the back of any watch to track your activity and sync data with your phone.

Perhaps the most important factor in deciding whether a watch is worthy of gracing your wrist is whether you miss it when you’re not wearing it. While I found the Pebble to be handy and good at the things it can do, I didn’t mind switching it for one of my analog watches and not receiving notifications or replying to messages with it. Using my phone doesn’t take much longer, and I’m happy to be able to choose a watch that I enjoy looking at.

Summing up, I think smartwatches have tremendous potential as tech accessories for gadget enthusiasts – but I don’t believe that they’ll steal the spotlight away from traditional watches anytime soon.

That being said, I’m excited to try the Pebble 2 when it’s launched in November, and see what the Apple Watch 2 and Samsung Gear S3 look like when they are unveiled later this year. I am still a tech geek, after all.