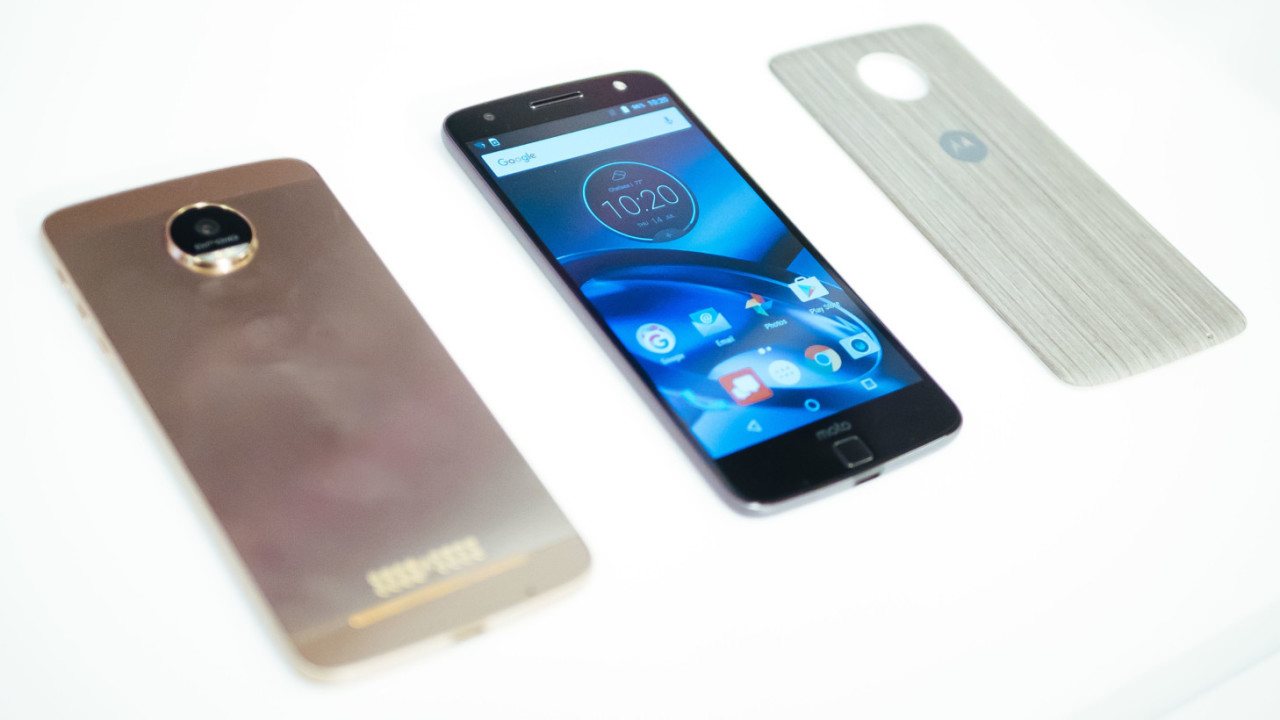 When Lenovo and Motorola announced their new modular flagship devices – the Moto Z and Moto Z Force – I was only mildy interested. That’s not because I don’t like the idea of modular phones, but I had been burned by the middling LG G5, first device to try to seriously try to make modularity a thing.

As cool as it sounded on paper, the implementation was sloppy, and far from seamless. Only techies would really get something out of it, and even then changing the few modules available was an awkward process.

But after being able to get some hands-on time with the Moto Z and Moto Z Force (the Droid editions coming to Verizon, that is), I have some renewed hope. If they hold up over time, they could be the prototype of modularity for the masses.

For the most part, the Moto Z has fairly standard flagship specs

But there are some differences. The Moto Z Force bumps up the camera to 21MP and adds deep-trench isolation for improved light capture. The battery is boosted to a hefty 3,500 mAh, and the screen gets upgraded to Motorola’s seriously impressive shatterproof technology. Your compromise is a few millimeters of thickness (and likely, price).

Let’s get the worst thing out of the way: this phone doesn’t have a headphone jack, and that will be annoying. Whether or not Apple can pull that off is already in question, and Motorola doesn’t have quite the clout to shift the industry towards wireless and USB-C headphones on its own.

But hey, they include an adapter. *sighs*

That aside, the Moto Z is quite the attractive phone. I was divided about the looks from the original leaks and announcement, with all the different patterns and protruding camera in the back, but it feels well put together. More importantly, the thin removable style shells help turn the busy back into something sleeker, and make the camera sit flush with the body.

Speaking of the shells, they’re held strongly by the magnet system One of the style shells I tried did have the tiniest bit of wobble  if you pressed from the side, which could irk the more persnickety folks, but for the most part it feels like one solid piece of hardware. Aside from the style shells, most modules have a small lip that make the shells easier to remove.

Up on the front you have the square fingerprint sensor within the unfortunately large bottom bezel. From trying the same sensor on the G4, you’ll likely get annoyed by the fact that it doesn’t serve as a home button. Given the already large bezel, I really wish Motorola had gone the capacitive button route rather than stealing real estate from the bottom of the screen.

The standard Moto Z is ridiculously thin (Motorola claims it’s the thinnest phone in the world). Even with a style shell applied, it’s thinner than my HTC 10. But then, it only has a 2,600 mAh batery.

Meanwhile, the Moto Z Force is larger, but still fairly svelte. It’s about as thick as the HTC 10 with the shell attached, a bit thinner without it.

Also, kudos to Verizon this time around: There’s no Verizon logo anywhere on the device. Instead, you simply have bit of unobstrusive ‘Droid’ branding under the camera.

The style shells come in a variety of colors and styles, including real wood, leather, fabrics, or solid colors. It’s launching with six styles, and more are on the way. These don’t provide any functionality other than upping your fashion game.

Meanwhile the Power Packs are just what they sound like – external batteries that seamlessly fit on the phone.

They do make the phone thicker, but they’re a much more elegant solution than traditional battery cases, especially once more designs are available. On the thinner Moto Z, the size is totally manageable.

I tried out the JBL speaker Mod in an acoustically sealed setup. It gets quite loud and provide bass performance smartphones can’t offer on their own. You could of course just buy a Bluetooth speaker, but having it right on the phone adds a layer of convenience.

They certainly make the phone a lot thicker, but still small enough that I would only need to pack my phone in pocket if hosting a party, going out to a barbeque or something of the sort. Plus having the extra 1,000 mAh is handy if you need it as a battery pack in a pinch.

At 50 lumens and 480p resolution, don’t expect it to be quite cinema-quality, but it should suffice for casual movie-watching at night (I have a projector at home with nearly the same specs,). There’s no autofocus, but I prefer the automatic correction for keystoning anyway, which comes in handy given the integrated kickstand.

Finally Motorola also showed off a development kit, which showed off potential future options like adding advanced microphones or even a second screen.

There’s a lot of potential in the modules, especially given how simple they are to replace compared to the G5’s convoluted system. It’s just a matter of whether developers and accessory makers are willing to step up to the plate.

There’s a lot to like here at first glance. Other than the missing USB-C port, my only other initial qualm is all the bloatware Verizon loads onto the device. I counted eighteen Verizon apps and games, yeesh.

At least you get nearly-stock Android otherwise, which bodes well for long-term performance.  Aside from Motorola’s gestures and voice commands that is, which are genuinely useful.

The devices make strong first impression, but we have to give it a full rundown to see if it’s worth your money.

In particular, Motorola’s claim of 30 hours mixed use from the puny 2,600 mAh battery thinner Moto Z seems highly suspect. And don’t get me started on the headphone jack, which has no reason to be missing from the thicker Z Force.

Still, the Mods offer customization potential no phone can offer (at least until Project Ara arrives). More importantly, the Moto Z manages to make modularity simple for mainstream users, which is where the G5 failed.