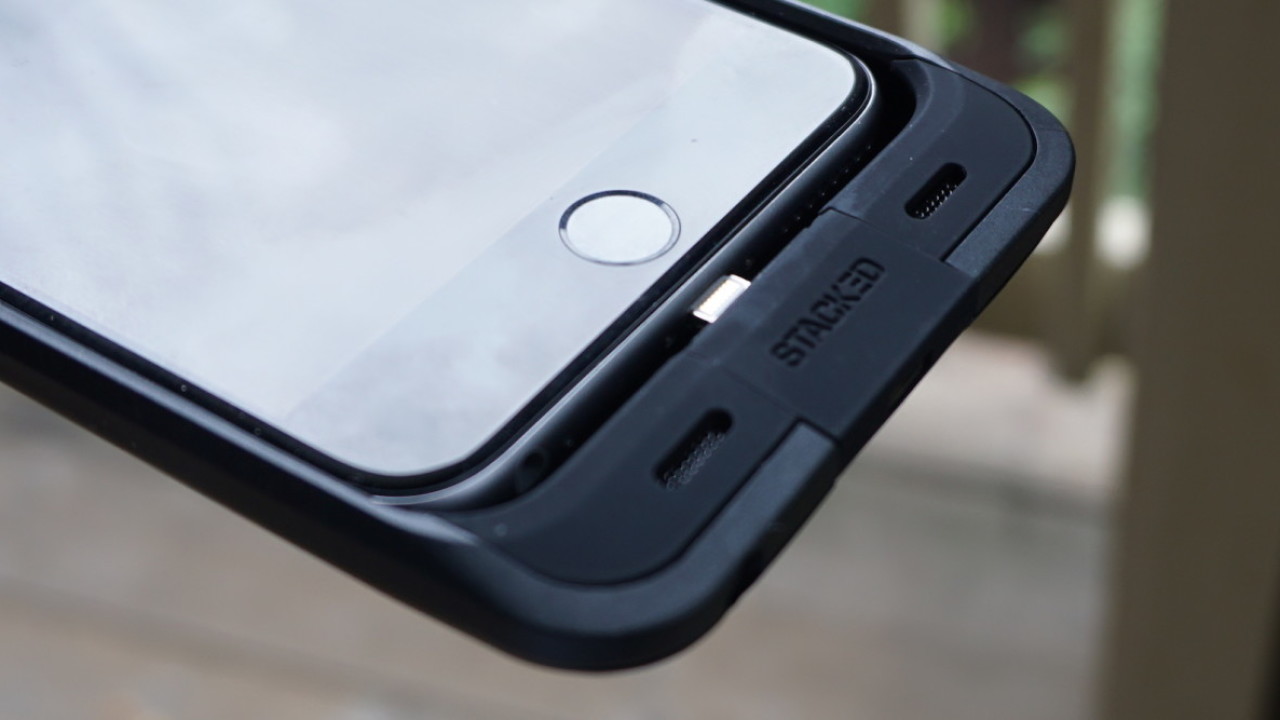 The core case is much like any other battery case; a Jay Leno-like chin at the bottom helps to hide necessary wiring, and the rest simply protects your device. The bottom center of the ‘chin’ also slides out, though it’s not clear why that is (except that it makes it easier to take the phone out of the case).

It’s a hard plastic, save for the top portion which is pliable to allow you to slip your phone inside. It has a lightning dongle, and a nice microfiber-ish lining. All told, it’s a pretty nice case.

Where Stacked separates itself is in the actual battery, which isn’t part of the case at all.

Instead, the 2750 mAh Stacked battery is wireless, and affixes to the case via magnets. It also charges wirelessly, linking to a wall charger via the same magnet scheme.

The battery is about the size of an iPhone 5S folded in half; its charger a touch smaller. Stacked says you’ll get an extra 8 hours talk time, 10 hours of video or 40 hours of music playback with one battery.

You can also get up to five battery units and charge them on one charger. They stack using — you guessed it — a magnetic hold.

In use, Stacked presents a few instances where I think it’s handy. It lets you have a case at all times without the bulk of the battery, which is great if you’re on a trip and want to charge when you need to.

Similarly, you could stash the Stacked battery cells all over the place — the office, your car, a bag — and never really run out of power or need a wall outlet to charge your phone.

Where Stacked falls short is in the finer details (the catch!). Its charge port uses a micro USB inlet should you want to charge your iPhone directly, meaning it’s not part of Apple’s MFi program. It also means you’ll need to find yourself a micro USB cable, as Stacked didn’t think to include one with the unit.

The headphone jack is also obfuscated by the bottom bulge. Though Stacked includes an extension for your headphones, I can easily see that being forgotten or lost. I hope you’ve got some Bluetooth headphones.

At the end of the day, I think Stacked’s system is great for travel. With a few battery packs, I can see myself going a weekend or more with normal to heavy use, and not needing to worry one bit.

Stacked claims it charges your phone up to two-times as fast as a wired connection, but I didn’t notice that to be true. It does start charging the second you put a battery pack onto the case, which is nice, but it’s not resoundingly faster than wired.

Still, Stacked is growing on me. When I notice my battery is low, I can just slap a battery on the case and go. The magnets are strong enough that I’ve dropped the phone without it sliding off, so I’ve got no concerns when it’s in my bag.

With a battery, it’s touch too large for a pocket, which is why I think it’s great for travel — when I tend to have a bag with me at all times.